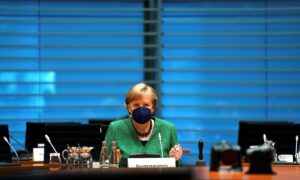 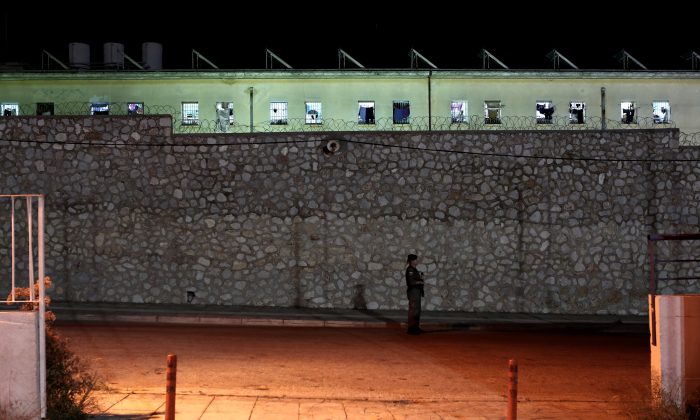 A police officer stands in front of the Korydallos prison in Athens, the largest penitentiary in Greece, on May 3, 2015. (Angelos Tzortzinis/AFP/Getty Images)
Europe

ATHENS, Greece—Europe’s leading human rights body has slammed conditions in Greek prisons and criticized the handling of police abuse allegations, describing dramatic circumstances for the country’s detainees and saying not enough improvements have been made despite repeated recommendations.

The situation in Greece’s prisons has “further deteriorated to the point where lives are being lost,” the Council of Europe’s Committee for the Prevention of Torture said in a 76-page report released Tuesday, based on a visit to the country last April by a delegation from the group.

It cited severe overcrowding, with some prisons at double their capacity, a lack of health care and major staff shortages as well as often appalling hygienic conditions.

“Currently, many prisons in Greece are merely acting as warehouses in which to hold people until they are eligible to be released back into the community,” the report said. “It is high time to change the way prisons function in Greece.”

Over the years, the European Court of Human Rights has repeatedly ruled against Greece in complaints filed by inmates claiming inhuman and degrading treatment in the country’s detention facilities. The Committee for the Prevention of Torture had equally criticized conditions, most recently in reports in 2014 and 2012, each time saying its recommendations for improvements hadn’t been implemented.

“The situation has now deteriorated to the point where over and above the serious ill-treatment concerns …, there are very real right to life issues … in as much as vulnerable prisoners are not being cared for and, in some cases, are being allowed to die,” the report said.

Greece’s justice ministry and police authorities, in responses also released Tuesday, noted improvements in several areas and said efforts were being made to address other issues, while investigations had been ordered into allegations of police mistreatment of several suspects detained in police stations.

The government said new laws have led to a reduction of the overall prison population, and it set out a series of targets to be achieved over the next three years. While the justice ministry said some parts of the report “seem like an exaggeration of the overall situation, this doesn’t lessen our serious concerns about the disappointing situation at Korydallos Prison Hospital.”

The prison hospital, the only one of its kind in Greece, was singled out for particular criticism for unhygienic conditions and a lack of staff. Inmates in the facility, which is part of the country’s largest prison complex and is located near Athens, have previously gone on hunger strike to protest conditions, and have posted photos of the interior on social media to back up their claims.

Despite this, “at the time of the CPT’s visit, urgent action had still not been taken to remedy the situation which was so drastic that the place could be compared to a dumping ground for sick prisoners who are subsequently neglected and not provided with the care required,” the report said. “Such an appalling state of affairs cannot be permitted to continue.”

The report welcomed commitments from the justice ministry to tackle the issues and improve the health care facilities.

As in previous visits to Greek prisons, the council found nearly no allegations of ill-treatment of inmates by prison staff. But it noted violence and intimidation among prisoners themselves was “a serious problem” that sometimes led to severe injuries requiring hospitalization. The report attributed the violence to severe staff shortages, such as in Korydallos, where a wing of 350-400 inmates would be staffed by just one or two prison officers.

The committee likened the situation to “a boiling cauldron left to simmer away with violent eruptions every few months.”