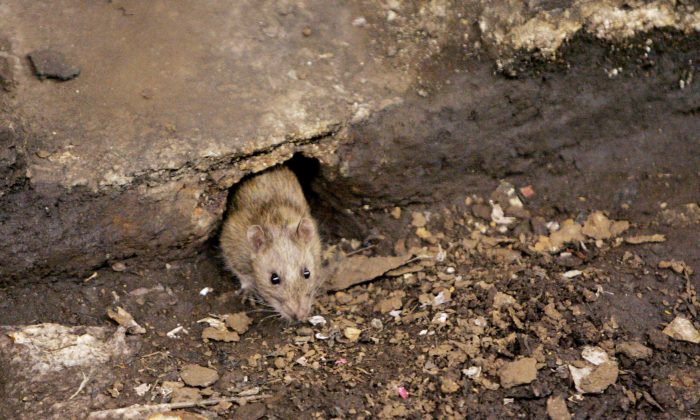 A rat comes out of its hole at the F subway stop in Brooklyn, New York, in this file photo. (AP Photo Photo/Julie Jacobson)
Health News

Could NYC Rats Be a Harbor for the Plague?

Rats in New York City carry a species of flea that is capable of transmitting plague pathogens.

For a new study, researchers collected more than 6,500 specimens of five well-known species of fleas, lice, and mites from 133 rats. Among them they found more than 500 Oriental rat fleas, notorious for their role in the bubonic plague, also known as the Black Death.

Researchers wanted to look most closely at the rat flea because of its potential as a vector for human disease, says Matthew Frye, an urban entomologist with Cornell University’s New York State Integrated Pest Management (IPM) Program. “If these rats carry fleas that could transmit the plague to people, then the pathogen itself is the only piece missing from the transmission cycle.”

Where is the plague found these days? In the United States, it’s found in the American Southwest among ground squirrels, prairie dogs, and the fleas they harbor, infecting roughly 10 people each year. In other parts of the world, the incidence of plague is higher.

The study’s results suggest that public health officials closely monitor city rats and the fleas that call them home.

The plague isn’t the only disease of concern. Co-author Cadhla Firth, a research scientist at Columbia University’s Center for Infection and Immunity, used molecular screening methods to look for two other pathogenic bacteria the Oriental rat flea could vector: Rickettsia (which they didn’t find) and several species of Bartonella.

“These pathogens can cause a wide range of clinical syndromes, some severe,” Firth says.

The study’s results, published in the Journal of Medical Entomology, suggest that public health officials closely monitor city rats and the fleas that call them home. But everyone can contribute, Frye says, by implementing practices recommended by Integrated Pest Management.

“Removing food and water and preventing access to shelter are key to knocking back rodent infestations,” he says.

But evicting rats from homes and workplaces doesn’t go far enough. Sanitation efforts that rid buildings of fleas, lice, and mice is critical. “It’s not that these parasites can infest our bodies,” Frye says, “but they can feed on us while seeking other rats to infest.”

In research published in 2014 in the journal mBio, scientists noted a disturbing number of viral and bacterial diseases that those same 133 rats carried. Some were unknown until now, including a handful that could infect humans.