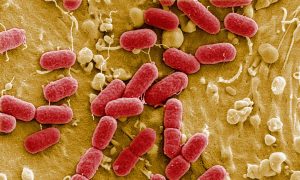 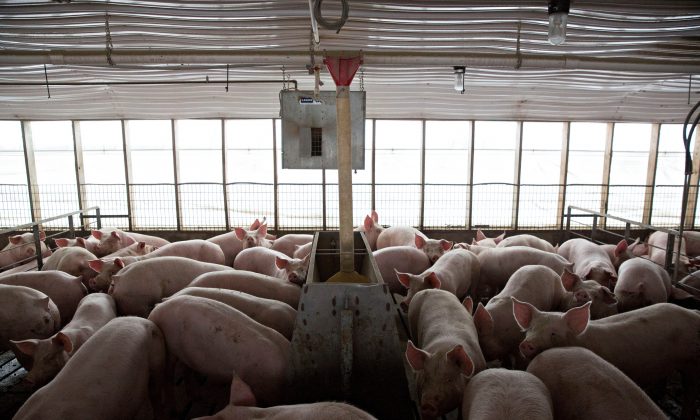 It is still common to overuse antibiotics deemed medically important to humans to prevent disease outbreaks and increase weight gain among animals. The result is cheaper meat at the cost of new antibiotic resistant superbugs that pose an imminent danger to humans. (Daniel Acker/Reuters)
Opinion

Consumers Are Losing the War Against Meat Antibiotics

Antibiotics serve two purposes for large-scale meat farmers. They allow them to raise animals in unsanitary, confined conditions that would otherwise kill or sicken them and they allow factory farmers to use less feed because antibiotics lead to increased weight gain. How much less feed? Without antibiotics, 175,550 more tons of feed would be needed to grow U.S. turkeys said Michael Rybolt of the National Turkey Federation at 2008 hearings when the FDA tried to limit farm use.

It is thought that antibiotics increase weight in livestock by strengthening microbes that absorb nutrients, making food more “efficient.” The same action of antibiotics may explain the human obesity epidemic postulate researchers.

But the overuse of animal antibiotics does worse things than contribute to human obesity—it creates antibiotic-resistant microbes including E. Coli, salmonella, Methicillin-resistant Staphylococcus aureus (MRSA), C. difficile and others. Each year in the United States, at least two million people become infected with bacteria that are resistant to antibiotics and at least 23,000 people die each year as a direct result of these infections says the Centers for Disease Control and Prevention (CDC).

One of the reasons pharmaceutical companies have not dedicated themselves to developing new antibiotics to address the antibiotic-resistant microbes afflicting humans is that there’s no money in them. Unlike the statins and psychoactive drugs which have made the pharmaceutical industry arguably the most profitable industry in the world, antibiotics are only taken for a few days by humans.

But of course, feeding them by the ton to farm animals, which enriches large-scale meat farmers and the pharmaceutical industry, is a different story. And, despite the efforts of public health agencies, hospitals, doctors and lawmakers to stop producers from feeding healthy animals antibiotics at the expense of human health, the pharma is still brazenly pushing the practice. It is an issue that often pits doctors against veterinarians.

A recent New York Times article details how animal pharma giant Elanco had launched a campaign called “Pig Zero” that tells farmers to treat pigs with antibiotics when they are healthy and before a disease outbreak occurs. This is the exact opposite of what the CDC, doctors and public health officials urge.

U.S. industrial farmers turn nasty when the government tries to take away their antibiotics. In 2008, the egg, chicken, turkey, dairy, pork, and cattle industries stormed Capitol Hill over the FDA’s attempt to prohibit the use of antibiotics called cephalosporins and they won.  Antibiotics are downright “green” said the National Turkey Federation’s Rybolt at the hearings since less land is needed for crops.

After a decade-long battle with Bayer, whose fluoroquinolone Baytril (enrofloxacin) was routinely used in poultry, the government managed to ban the antibiotic’s use in poultry water. But, and it is a big “but,” fluoroquinolones—including Baytril—are still clearly in use on U.S. farms, behind the public’s back. For example, the U.S. Department of Agriculture’s (USDA) National Residue Program for Meat, Poultry, and Egg Products, which tests for six fluoroquinolones, found enrofloxacin (Baytril) and ciprofloxacin (Cipro) residues in meat in 2014.

Also found by the USDA were residues of danofloxacin, an antibiotic not even approved for humans. Danofloxacin is so dangerous its label says, “Animals intended for human consumption must not be slaughtered within 4 days from the last treatment. Do not use in cattle intended for dairy production. A withdrawal period has not been established for this product in pre-ruminating calves. Do not use in calves to be processed for veal.”

Though a 2013 FDA guidance required pharma companies that make livestock antibiotics remove “growth production” from the label, the drugs are still routinely used for the new indication of “disease prevention” senior staff Scientist at Consumers Union Dr. Michael Hansen told me soon after the new guidance.

One example of these uses is seen in feedlots, said Dr. Hansen. Feeding cattle grain instead of a more natural diet produces a high level of liver abscesses, he said, and feedlot operators routinely give cattle the antibiotic Tylosin for the abscesses thus “preventing disease.” Tylosin reduces abscess incidence by 40 to 70 percent in such cattle according to medical journals.

The late congresswoman Louise M. Slaughter, a microbiologist with a master’s degree in public health, said the 2013 guidance was “an inadequate response to the growing antibiotic resistant crisis caused by overuse of antibiotics on the farm.”

Pilgrim’s Pride’s feed mill records show the antibiotics bacitracin and monensin are added: “to every ration fed to a flock grown early this year.” Pilgrim’s Pride threatened legal action against Reuters for its finding. Also caught red-handed using antibiotics despite denying their use on its website was KFC-supplier Koch Foods. The company’s chief financial officer, Mark Kaminsky, said afterwards, “I regret the wording.”

Both the late U.S. Senator Edward Kennedy and Rep. Slaughter fought valiantly to curtail farm antibiotics but they had formidable enemies. Pharma and factory farmers spent over $17 million to block the Antibiotics for Medical Treatment Act of 2007.

“It seems scarcely believable that these precious medications could be fed by the ton to chickens and pigs,” wrote Kennedy in the bill, noting that up to 70 percent of all U.S. antibiotics go to livestock.

And meat antibiotics don’t just remain in the meat. Scientists at the University of Minnesota found antibiotic residues in corn, green onions, and cabbage after growing them on soil fertilized with livestock manure. The drugs siphoned right up from the soil in just six weeks.

A University of Iowa study in 2010 found the resistant bacteria MRSA in 70 percent of hogs on farms studied and 64 percent of workers. Superbugs have even been found on an unopened soft drink can in a car following a poultry truck.

With pro-public health voices like Sen. Kennedy and Rep. Slaughter gone and pro-industry voices dominating policy debates, it looks like consumers are losing war against antibiotics war on the farm.