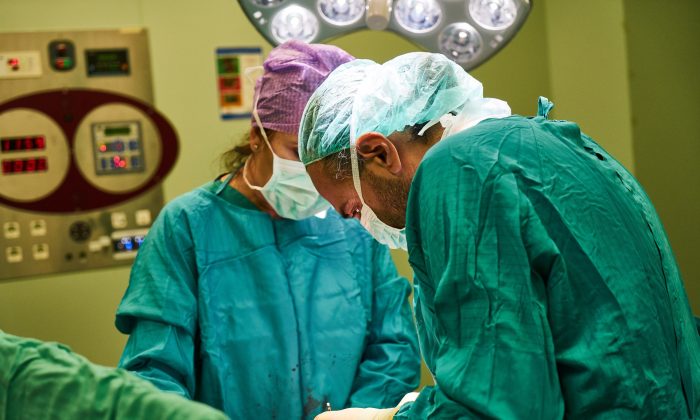 Stock photo of surgeons in an operating theatre. (CC0)
Health

A construction worker in India has defied death after being impaled through the skull with a metal rod.

Sanjay Bahe, 21, is recovering after undergoing emergency surgery to remove a piece of rebar that had penetrated his head clean through, CNN reported.

Bahe was working at a construction site on April 10 when he fell headlong into a well, the Daily Mail reported. The young man’s unfortunate fall caused a long iron rod to enter his skull from the right temporal region of his brain to the left frontal region, and then exit out the other side.

An Indian construction worker was impaled through the head with an iron rod — but is expected to make a full recovery https://t.co/MfBA3xHKxC

He was immediately rushed to an area hospital and into the operating room.

“He was hypertensive,” said Dr. Pramod Giri, a neurosurgeon at the Neuron Brain Spine and Critical Care Centre at Nagpur in Maharashtra, CNN reported. “He was in shock when he was brought in.”

A team of neurosurgeons led by Dr. Giri worked to save the man’s life in a tricky, 90-minute procedure.

“It is indeed a miracle that the man survived". Warning: Graphic content.

Dr. Giri was cited by News.com as saying the key to Bahe’s survival was that as the metal rod punctured the man’s head, it missed the “main venous sinus to the brain.”

“Giving anesthesia to the patient in such cases is difficult. We did right by positioning the intubation to maintain vital channels in the brain during the operation,” Dr. Giri said, according to the Daily Mail.

“I performed the surgery with all caution so that damage to the surrounding structures shouldn’t happen,” Dr. Giri added.

The patient faced the threat of meningitis—a potentially deadly infection of the membranes that surround the brain and spinal cord.

“One complication that can take place in such cases is causing meningitis to the patient,” he said.

“Fortunately, he is doing fine after the surgery, and we are also taking care to prevent meningitis,” Dr. Giri wrote in a report titled “Miraculous Escape,” according to CNN.

In another account of extraordinary survival, an Indiana man who earlier survived brain cancer survived a car crash that left him internally decapitated.

“I have fought for my life this time around, and some days I feel like I still am. God has put me through some crazy stuff, and he’s really testing me,” Brock Meister, of Plymouth, Indiana, said in a statement via Beacon Health System in August.

The 22-year-old man suffered the injury, which separated his skull from his spine, in January.

“We also just have to think that some people are blessed,” said Dr. Kashif Shaikh, who is a Beacon Medical Group neurosurgeon. “Brock somehow survived a brain tumor as a child, and now, only a few years later, he has survived an almost universally fatal injury. It is truly incredible.”

The news release stated that Meister was having dinner with friends and left in a truck that later hit a patch of black ice, causing the vehicle to roll on the passenger side. His head smashed into the truck window, causing the internal decapitation.

“Brock kept trying to get up and the only words he was saying were ‘my neck’ and ‘ambulance.’ I knew that he was in some serious pain and that if it was his neck, I couldn’t let him get up and move,” friend Ryan Topper, who discovered him after the crash, said. “So I just put my hand over his chest and kept him from getting up. I kept talking to him, reassuring him everything was going to be all right, and that he’s ‘my boy, Brock,’ not letting him move until the ambulance showed up.”

Meister was taken to Memorial Hospital in South Bend, Indiana, and doctors stabilized him. They discovered that he suffered a “complete separation of the skull from the spine or internal decapitation,” according to the news release.

According to the National Center for Biotechnology Information, internal decapitation cases have a “relatively high incidence of mortality.”

The surgery was ultimately successful, and Meister was released from the hospital in February 2018. He continued to recover, undergoing physical and occupational therapy.