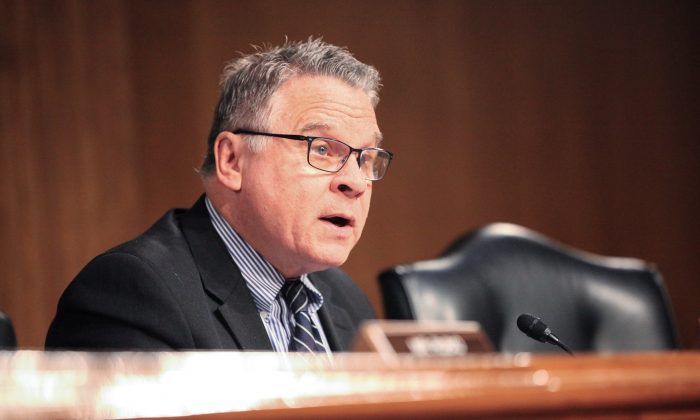 U.S. Rep. Christopher Smith (R-N.J.) is urging President Donald Trump to raise the issue of human rights directly during his meeting with Chinese leader Xi Jinping in Argentina on Nov. 30.

Smith said at a congressional hearing on Nov. 28 that the United States stands in solidarity with the Chinese people, and not with a dictatorship that “kills lives … tortures … and crushes religion.”

Smith’s comments come amidst growing tensions in China’s Xinjiang Province, where reports of unprecedented human-rights violations of Uyghur Muslims have echoed through the international community. Reports of torture, rape, and killings in secretive political re-education camps also have been documented.

“They use the same tools, used different pretext, always crushing people of faith, whether it be Falun Gong, Catholics, Christians, Protestants, Tibetans, Muslims,” Smith told The Epoch Times. “What government does that to its own people?”

As co-chair of the Congressional-Executive Commission on China, Smith has heard in detail the horrific methods the Chinese regime uses to torture its own citizens. Any pretext is used as an excuse to persecute groups that the regime considers a threat or objectionable.

The treatment of Uyghur Muslims in Xinjiang is reminiscent of the persecution of the spiritual practice Falun Gong in China that began in July 1999, Smith said.

The Connection Between Human Rights and Trade

Trump’s tough stance on trade may be the only way to get the Chinese regime to change its unfair subsidies, state-sponsored technology theft, and human-rights violations.

“People say, ‘Well, what is the connection with trade?’ Do you think we can count on people to respect copyrights and intellectual property rights if they can’t even respect their own people? And if they torture them with impunity as they do?” Smith said.

“If they steal their organs as they do to the Falun Gong and then sell those organs for massive profits, that is barbaric,” Smith said. “The Falun Gong people have suffered so much, and as I and so many others have raised over the years, the Chinese government needs to be held to account.”

Smith and Sen. Marco Rubio (R-Fla.) have introduced legislation that would call on the Commerce Department to stop U.S. companies from sending surveillance capabilities to Chinese police and other security apparatuses.

“They’re using [surveillance capabilities] against good, hardworking individuals who happen to be Muslim [and] against other faith denominations, as well,” Smith said.

A Call to the President

He says it’s absurd that the Chinese regime is fearful of people of faith who want to live out their convictions, and hopes that the president doesn’t abandon the human rights issue as previous administrations have.

Smith has also called on the president to use the global Magnitsky Act to sanction individual perpetrators of these crimes.

“We had eight years of President Obama who looked the other way when it came to China. Bill Clinton notoriously and infamously de-linked human rights from trade … and said, ‘We’re going to make profits, that’s more important,’” Smith added. “President Trump now has to rise to the occasion of defending these wonderful Chinese people who are being so horribly repressed by the government. They deserve better than what they’re getting from their government.”