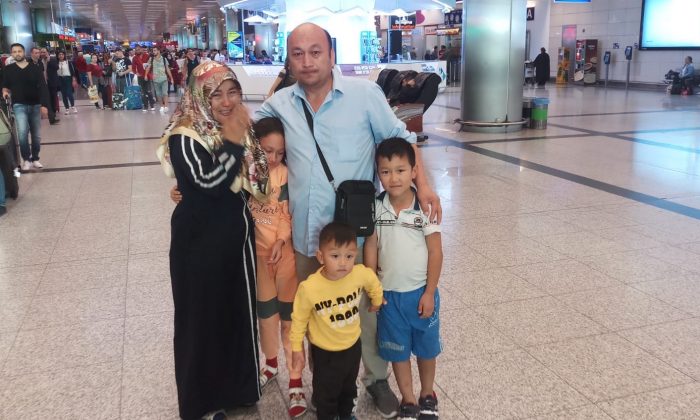 “Upwards of 1 million” of the predominantly Uyghur prisoners continue to be detained in what were, until Oct. 9, extrajudicial internment camps in western China, according to figures quoted by the U.S. Congressional-Executive Commission on China (CECC) and the United Nations.

Chinese Communist Party (CCP) officials say the mass detentions among the Uyghur population, the majority of whom practice Islam, are part of measures to crack down on terrorism, religious extremism, and separatism in the country. The CCP has used the excuse of potential “extremist threats” to justify its strict surveillance and crackdown on Uyghurs and other Muslim minority groups in the Xinjiang region.

First-hand accounts described to The Epoch Times reveal attempts by authorities to strip Uyghur detainees of their culture and language, forcing them to denounce their faith and pledge loyalty to the CCP and its leader.

If detainees fail to follow orders, they may be subject to up to five forms of torture as punishment, a Uyghur and former inmate explained in an interview from Istanbul, Turkey.

Xinjiang-born Omir Bekli, 42, a Kazakhstan national since 2006, was detained for six months in March last year after he was forcibly taken from his parents’ home in Shanshan—180 miles east of Urumqi, the capital of Xinjiang—his head covered in a black sack before being whisked away.

He was visiting Urumqi at the time to attend an international meeting about tourism.

Bekli was detained for seven months in a police cell and then sent to a reeducation camp in Karamay for 20 days where he was tortured, with one of the reasons being his refusal to sing songs which praise the CCP and its leader Xi Jinping.

Uyghurs are “chained up like animals,” deprived of food and sleep, and beaten until their bodies are “swollen and pouring blood.”

“They make you fear and make you weak, physically and mentally, so that they can make you obey them,” Bekli explained.

Another Uyghur detainee—a Kazakhstan national aged 54 who was released in September from a camp in Urumqi after being detained for 15 months—told The Epoch Times that young Uyghur women are being raped daily by CCP officials in the camps and could be killed if they resist. The 54-year-old spoke on condition of anonymity from Istanbul due to fears for her safety.

“Young girls are taken out and raped all night long. If you keep resisting, they will inject you with something and kill you,” she said.

She has personally witnessed two Uyghur females being killed by injection, she told The Epoch Times.

“There are usually 40 to 50 people in one small room, but five to 10 are regularly taken out and they just disappear—they never come back. People are being killed in tens all the time.”

She added that women are also given pills to stop them from becoming pregnant.

Bekli said that in his camp, he also witnessed dead bodies of Uyghurs being dragged out of rooms while he was detained. “They were most probably beaten to death,” he said.

Having previously denied all allegations of religious discrimination and the existence of mass internment facilities, local authorities in Xinjiang moved to officially legalize so-called “vocational training centers” on Oct. 9 to “educate and transform” those believed to be religious extremists.

High-ranking CCP official Hu Lianhe, who is in charge of the Party’s minority affairs office, had just assured a UN panel on racial discrimination in August: “there is no suppression of ethnic minorities or violations of their freedom of religious belief in the name of counterterrorism” in Xinjiang.

Hu also rejected the claims that the numbers of Muslims detained in the region go up to one million. In addition to the Uyghurs, other predominantly Muslim ethnic minorities suffering detention include the Kazakhs, Dongxiang, and Uzbeks, as well as Han Chinese Muslims (Hui). House Christians, Falun Gong practitioners, and other political prisoners have also been reportedly arrested and detained in the Xinjiang region.

Uyghurs in the region are being detained for reasons such as contacting friends or relatives abroad, travelling to a foreign country, growing beards, and attending religious gatherings, Uyghurs who have family members in the camps told The Epoch Times.

Bodies of those who die while in the facilities are never released to their family members, The Epoch Times has been told.

Who are the Uyghurs and Why is China Clamping Down?

The Turkic-speaking Uyghurs are one of China’s 55 officially recognized minority ethnic groups. Predominantly Sunni Muslims, they make up just under half of the 22 million who live in the Xinjiang region. Since the CCP reabsorbed Xinjiang into China in September 1949, the CCP has used the Soviet-backed East Turkestan claim as a means to justify its repression of the Uyghur people.

After the Sept. 11 attacks in 2001, the CCP named Uyghurs as part of the “three evil forces” of “extremism, separatism, and terrorism”—alongside Tibetans, house Christians, and Falun Gong—and have incessantly accused Uyghurs of committing “terrorist acts” across the country, despite little evidence. Uyghurs have been banned from adhering to religious practices such as growing “abnormally” long beards, fasting, and wearing religious veils as part of measures the local authorities describe as tackling Islamist extremism.

The repression of Uyghurs has only intensified in recent times, spurred on by major ethnic riots in 2009, 2013 and 2014, when the longtime suppression of Uyghurs was seen boiling over. According to Uyghur Association representative Enver Tohti and China commentator Ming Yan, the violent ethnic clash of 2009 had been plotted by CCP officials in order to further inflame ethnic tensions between Uyghurs and the majority Han Chinese. Political observers say they believed officials from the faction loyal to former CCP leader Jiang Zemin fomented the social instability to create a political dilemma for Xi’s leadership. The Epoch Times previously reported that the Xinjiang region has been a stronghold for the Jiang faction since 2002.

Rabiye Muhammad, who moved from Turpan to Calgary, Canada, in 2007, said her 65-year-old mother was detained in February this year for visiting her in October 2014 for four months.

“They took her because they knew she travelled overseas,” she told The Epoch Times.

Other family members who have also been taken away for “no reason” include her sister, 70-year-old uncle, and younger brother who was taken from his home with a black sack over his head.

“They took him just like that. They’re taking everyone nowadays—it’s genocide. They’re just finding any excuse to take the Uyghurs.”

Numerous Uyghur families have said they find themselves in similar situations.

U.S. based scholar, Tahir Imin, 38, born in Kashgar, told The Epoch Times that the CCP sees those who have travelled abroad as a “threat to society.”

“China believes those who have visited other countries can see the flaws and mistakes of the CCP,” Imin explained.

They are sent to detention camps for “brainwashing, torture, and punishment,” said Nicholas Bequelin, Amnesty International’s East Asia Director, according to a press release.

“A simple act of messaging your family abroad can get you detained… [it] highlights how ludicrous, unjustified, and completely arbitrary the Chinese authorities’ actions are.”

Those detained are not put on trial and cannot speak up against the decision or hire lawyers.

How are Uyghurs Tortured?

Uyghurs face five forms of punishment and torture if they disobey orders from officials in the detention camps, according to Bekli.

On just three sleep hours per day, from midnight to 3am, Bekli and his fellow inmates were forced to stare at the wall, sing the CCP national anthem, and three “positive songs about the CCP” before being given their first meal of the day. The same would happen again before lunch, he said.

Bekli explained: “If you refuse to sing songs praising the CCP and leader Xi Jinping, you’ll be beaten severely. They then make you stand and face the wall, and deprive you of sleep and food for 24 hours.”

Refuse again, and you’ll be chained up in a “tiger seat,” and deprived of food and sleep for a day longer, he continued.

The next punishment is being “chained up like an animal” for one to three days in an extremely dark room called a “black hole,” which measures approximately three meters squared, he said.

“The fourth punishment is, if it’s a hot summer day, they make you stand on a cement slab outside under the sun. You have nothing on your body except underwear—no shoes.

“Your feet will burn because of the heat of the sun. If it’s winter they do the same thing,” Bekli told The Epoch Times.

The final punishment includes being beaten severely with sticks and “anything they can find.”

“Then they hang you up from both of your hands. They put you in a water prison filled with very dirty, smelly water, up to your neck, for one to five days.

While forgoing their final punishment, Uyghurs are given a small piece of bread “just so you survive,” Bekli added.

Uyghur men in the detention camps are also forced to take a pill every day, “to stop their sexual feelings forever,” Bekli said.

“That pill makes people seem crazy, insane, and as if they don’t know what they’re doing—they just do as they’re told. It’s as if they’re high—you can see they’re not normal.”

Bekli hid the pill under his tongue every day, pretended to drink water, and later spat the pill out. “That’s how I survived.”

Because of the “extreme pressure” in the detention camps, a lot of Uyghurs want to commit suicide, Bekli said.

“But there is no way to do so, because five to ten people are always watching you, and there are cameras in the rooms.”

The CECC’s 2018 annual report, released on Oct. 10 (PDF), states that the situation in Xinjiang “may be the largest incarceration of an ethnic minority population since World War II, and that it may constitute crimes against humanity.”

And during a speech on Oct. 4 at the Hudson Institute on the policy of the United States towards China, U.S. Vice President Mike Pence said the mass internment and brainwashing of Uyghurs was a “new wave of persecution” crashing down on Uyghur Muslims.

“Survivors of the [government] camps have described their experience of the camps as a deliberate attempt by Beijing to strangle Uyghur culture and stamp out the Muslim faith,” Pence said.

Aydin Anwar, a Uyghur who lives in the United States, told The Epoch Times she believes the Xinjiang facilities are a way to “hide the mass extermination of Uyghurs.”

“Why are bodies coming out dead? If China really wants to assimilate us, why are they killing people?” she asked.

Amnesty’s Bequelin said the CCP must be held to account by governments around the globe for the “vicious campaign against ethnic minorities” and “nightmare” in Xinjiang.

“Hundreds of thousands of families have been torn apart by this massive crackdown. They are desperate to know what has happened to their loved ones and it is time the Chinese authorities give them answers.”