US Should Embed Human Rights in Every Aspect of Foreign Policy: CECC Report 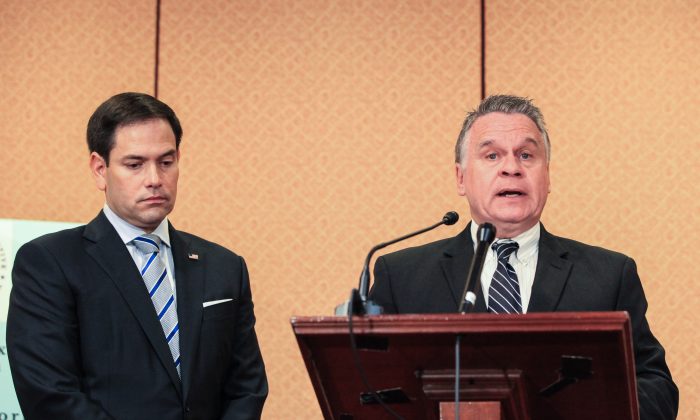 Rep. Chris Smith (R-NJ) (R), CoChairman of the Congressional-Executive Commission on China (CECC), and Sen. Marco Rubio (R-FL) Chairman of CECC, speak on the release of the 2018 Annual Report of the Commission on human rights conditions and rule of law developments in China, in Washington, on Oct. 10, 2018. (Jennifer Zeng/The Epoch Times)
By Jennifer Zeng

WASHINGTON—The Congressional-Executive Commission on China (CECC) issues a report every year on human rights and rule of law in the People’s Republic of China, although the feeling at the release of this year’s report felt different.

There was sadness that an already desperate human-rights situation continues to deteriorate, but also a sense that things might just change.

“This has to be the pivot point,” said Rep. Chris Smith (R-N.J.), co-chairman of the CECC. “I’ve never seen a dictatorship like this one, that is so oppressive against its own people in modern times, at every front, in such large numbers.”

He called for the Trump administration, the United Nations, and the international community to make decisive actions to stop the “continued downward trajectory” of human rights in China.

“China is on a race to the bottom with North Korea on human rights,” Smith said.

CECC Chairman Sen. Marco Rubio (R-Fla.) and Smith made several specific suggestions for how the world could help bring change to China. They called for the International Olympic Committee to reconsider its decision to award the rights to host the 2022 Winter Olympics to China.

In a joint letter to FBI Director Christopher Wray on Oct. 10, Rubio and Smith asked the FBI to investigate claims of intimidation against the Uyghur-American community and the broader Chinese-American diaspora in the United States. Rubio and Smith also unveiled a bill, “Xinjiang Uyghur Human Rights Act of 2018,” that seeks to condemn the Chinese crackdowns in Xinjiang and urged the U.S. government to consider sanctions on Chinese leaders.

The report described the following as key developments in 2018:

The report calls for the U.S. Congress and Trump administration officials to stress to the Chinese government that the right to freedom of religion includes the rights of Buddhists, Taoists, Catholics, Falun Gong practitioners, and Muslims to freely practice their beliefs.

The report describes the ongoing persecution of the spiritual practice Falun Gong: “The Commission noted reports of continued repression of Falun Gong practitioners, by means of harassment, arbitrary detention, and prosecution. International organizations continued to express concern over reports that organs of detained prisoners have been used in numerous organ transplant operations in China, including those of Falun Gong practitioners.

The report also noted the ongoing repression of journalists.

“The Chinese government remained one of the worst jailers of journalists, with estimates of individuals in detention or imprisoned in connection with their reporting ranging from 41 to more than 50, including the founders of human rights monitoring websites and citizen journalists,” the report says.

Smith said that the United States does have tools, including the Global Magnitsky Human Rights Accountability Act, to hold Chinese Communist officials responsible for violating human rights. The world should learn lessons from how the international world acted collectively to hunt down Nazis, Smith said, with Nazi hunters spreading out all across the world in the name of justice.

“America long hoped trade and engagement would encourage Beijing to open up. It hasn’t happened,” Rubio and Smith wrote in a commentary published by The Wall Street Journal.

In August, Rubio, Smith, and 15 other lawmakers wrote to Secretary of State Mike Pompeo and urged the application of Magnitsky sanctions on Communist Party Secretary Chen Quanguo of the Xinjiang Uyghur Autonomous Region, who has spearheaded the harsh repression of the Uyghurs.