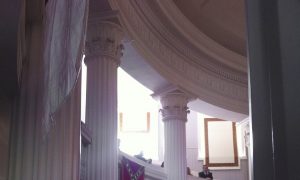 Confederate Flag Taken Down in South Carolina After 54 Years

COLUMBIA, S.C. — For the first time since the civil rights movement, the Confederate flag was removed entirely from the South Carolina Statehouse, in a swift ceremony Friday before thousands of people who cheered as the Civil War-era banner was lowered from a 30-foot flagpole.

Many people believed the flag would fly indefinitely in this state, which was the first to leave Union, but the killing of nine black church members during a Bible study in Charleston last month changed that sentiment and reignited calls to bring down Confederate flags and symbols across the nation.

Dylann Roof, a white man who was photographed with the Confederate flag, is charged in the shooting deaths, and authorities have called the killings a hate crime.

The crowd, estimated at up to 10,000 people, chanted “USA, USA” and “hey, hey, hey, goodbye” as an honor guard of South Carolina troopers lowered the flag during a 6-minute ceremony. Gov. Nikki Haley stood on the Statehouse steps along with family members of the victims and other dignitaries. While she didn’t speak, she nodded and smiled in the direction of the crowd after someone shouted: “Thank you governor.”

Haley supported the flag before the shooting, but the Republican had a change of heart in the days after the killings and led the push to get legislators to pass a bill before the end of the summer. She signed the legislation Thursday.

As she looked on, two white troopers rolled up the flag neatly and tied it with a white ribbon. They handed it to a black trooper who brought it to the Statehouse steps.

It feels so good to be out here and be happy about it.
— Ronald D. Barton

Highway Patrol Cpl. Rupert Pope downplayed the significance of their race in the ceremony.

“We’re all gray,” he said, with the other officers nodding in agreement.

President Barack Obama tweeted minutes after the flag was down, saying it was “a sign of good will and healing and a meaningful step towards a better future.” Obama delivered a eulogy at the funeral for state Sen. Clementa Pinckney, who was also pastor of the church where the killings took place.

The honor guard was the same group of men who carried Pinckney’s coffin into the Statehouse for a viewing last month.

It’s a sad day for me, that my ancestors will no longer see their flag flying next to their memorial.
— Cindy Lampley

Quarles said the group known as the Emanuel 9 smiled from heaven as the Confederate flag was taken down for good.

“The tragedy was a tragedy. But now on the other side of that tragedy, we see a lot of positives coming out. Maybe people will change their hearts,” Quarles said.

A van brought the flag to the nearby Confederate Relic Room and Military Museum. There, it eventually will be housed in a multimillion-dollar shrine lawmakers promised to build as part of a deal to get a bill passed removing the flag.

South Carolina’s leaders first flew the battle flag over the Statehouse dome in 1961 to mark the 100th anniversary of the Civil War. It remained there to represent official opposition to the civil rights movement.

Decades later, mass protests against the flag by those who said it was a symbol of racism and white supremacy led to a compromise in 2000 with lawmakers who insisted that it symbolized Southern heritage and states’ rights. The two sides came to an agreement to move the flag from the dome to a 30-foot pole next to a Confederate monument in front of the Statehouse.

Many thought it would stay there. Now, even that flagpole will be torn down Friday afternoon.

Patsy Eaddy, a black woman, said there was a “sense of embarrassment” of seeing the flag still flying after all these years. She attended the ceremony to see the important milestone in the civil rights movement.

“We lived through the turbulent ’60s. I’m just so happy to be here to witness this,” she said.

People who supported removing the flag chanted “take it down” before the ceremony and vastly outnumbered those who were upset about the move.

Officials estimated between 8,000 and 10,000 people were on hand, according to Sherri Iacobelli of the state Department of Public Safety.

Still, some were not celebrating. Clad in a black dress similar to those worn in the 19th century, Cindy Lampley clutched a poster showing photos of ancestors who fought for the Confederacy. Lampley said she is a historical reenactor who fears removing symbols like the flag dishonors her relatives who fought for the Southern cause.

“I think it’s important that we remember them,” Lampley said. “It’s a sad day for me, that my ancestors will no longer see their flag flying next to their memorial.”

Also Friday, the FBI said Roof should not been allowed to purchase the weapon used in the attack. FBI Director James Comey outlined a series of missed opportunities and incomplete paperwork that allowed the transaction to take place.

The problem stemmed from an arrest of Dylann Roof in South Carolina weeks before the shooting in which police say he admitted to possessing illegal drugs.