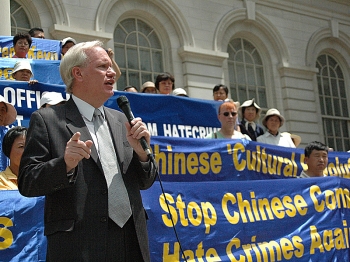 Councilor Avella reassured the crowd that he is urging the FBI and Queen's District Attorney to investigate increasing allegations that the CCP is behind a series of attacks by pro-communist mobs against Falun Gong practitioners in Flushing.

"The very fact that there have been organized attempts to prevent Falun Gong members from practicing their faith and their beliefs is absolutely un-American, disgraceful and cannot be tolerated in any way shape or form" said Avella.

Since May 17, mobs hundreds-strong of pro-Chinese Communist Party (CCP) supporters have shouted insults, spat on and physically attacked Falun Gong practitioners in Flushing, NY. They have also issued death threats such as yelling "Kill! Kill Falun Gong!" and have spread fabricated hate literature which defames the meditation practice. To date, at least 12 of the attackers have been arrested.

The World Organization to Investigate the Persecution of Falun Gong (WOIPFG) also released a recorded telephone conversation with Consul General Mr. Peng Keyu of the Chinese Consulate General in New York in which Peng admits he "encouraged" and "agitated" the anti-Falun Gong mobs.

While Councilor Avella spoke of remaining focused on the issue until "everyone behind the organized attacks … are brought to justice," Flushing officials, council member John Liu and assembly woman Ellen Young, were repeatedly singled out by speakers for encouraging the criminals rather than protecting democratic rights.

Zenon Dolnyckyj, a resident of New York who was beaten in Flushing by the mobs in May, was one of the practitioners who attended the meetings. Dolnychyj described what was discussed during the July 3 meeting with Flushing representatives Liu and Young.

"Your constituents are having their lives threatened. They are being followed. Can you not speak out to help these people?" Dolnyckyj said he asked Young. "I was met with dead silence… and complaints about foot traffic on the sidewalks."

When he asked Liu about the persecution of Falun Gong, Dolnyckyj said that Liu "feigned ignorance and said, 'I don't know anything about what's happening in China.'"

According to Dolnyckyj, Liu then commented that he had been speaking with Falun Gong practitioners for six years. "How could he speak with us for six years and know nothing about what's happening in China?" Dolnyckyj asked the crowd.

Dr. Zhiyuan Wang, President of the WOIPFG, said that given the "sheer size" of the mobs and the length of time the attacks have lasted already, it seemed clear that these incidents are the "manifestation of genocidal attempts against Falun Gong by the CCP."

Many rally members warned that the incidents which have taken place, not only in Flushing but also Brooklyn and Manhattan's China Town, were an extension of the 9-year persecution of Falun Gong in mainland China.

"Many of the Chinese people who live in this free land do not feel safe because of the harassment and violence and physical assault committed by the pro-communist mobs," said Erping Zhang, spokesperson for Falun Gong.

Zhang added that it is "important that in a free country we should be free from communist harassment," said Zhang. "We do not want New York City to become a backyard of Beijing."