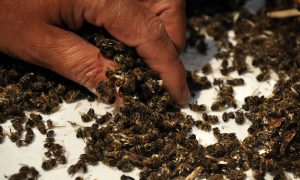 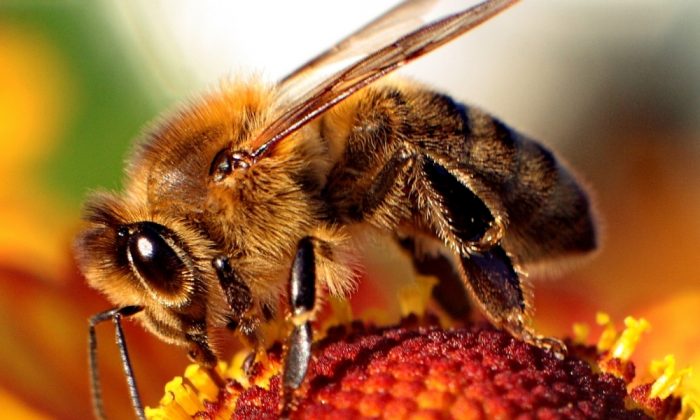 Bee of the genus Apis on a flower. (Wikimedia Common, Maciej A. Czyzewski)
Environment

At levels considered safe for human food, a common industrial pollutant called manganese can knock honey bees off their game.

A new study shows that when exposed to the metal, honey bees advance through age-related work assignments faster than normal, but complete fewer foraging trips than their unexposed sisters.

“We’ve known for a long time that high doses of manganese kill neurons that produce dopamine, causing a Parkinsonian-like disease in people,” says Yehuda Ben-Shahar, a biologist at Washington University in St. Louis. “In insects, as well, high levels of manganese kill dopaminergic neurons, reducing levels of dopamine in the brain.

“But in this study we were looking at low-level exposure and we saw the opposite effect. Instead of reducing dopamine levels, manganese increased them. Increases in dopamine and related neurotransmitters probably explain some of the abnormal behavior.”

Paradoxically, a trace amount of manganese is essential for life. All living organisms rely on the chemical properties of this metal to drive reactions in cells and to mop up the toxic byproducts of cellular life in the presence of oxygen.

“We evolved in an environment where there was little manganese, and so we developed ways to pump it into our cells,” Ben-Shahar says. “But now environmental levels are quite different from those to which we are adapted and we don’t really know what that means for human health.”

“When we try to understand pathologies, we often look at extremes,” he says. “We tend to ignore more modulatory changes like this one and assume we don’t need to worry about them. But that may be a mistake. The bees, which vacuum up everything in the environment, might be serving as an early warning indicator of an environmental toxin.”

For the study, published in Biology Letters, the researchers didn’t set out to discover the effect of manganese on bee behavior. Instead they were trying to study the link between responsiveness to sugar and the reward circuit in the brain. When a honey bee detects sugar, it reflexively extends its proboscis, a stereotyped behavior that can be experimentally manipulated and quantified.

The older the bee, the more responsive it is to sugar. In honey bee colonies tasks are divided according to age. For the first two to three weeks of adult life, bees typically take care of the brood in the hive. They then shift to foraging outside the hive for the remainder of their 5- to 7-week life.

In 1995 scientists screening for genes that affect sugar response in fruit flies discovered a gene that reduced it. They named it Malvolio, after a sour character in Shakespeare’s “Twelfth Night” who is accused of wanting to outlaw cakes and ale.

The Malvolio gene was later shown to encode a protein that pumps manganese across cell membranes. In 2004, Ben-Shahar published results that showed that age-related transitions in honey bees are associated with increased expression of the Malvolio gene and higher levels of manganese in brain cells.

Researchers then wondered why manganese changed feeding behavior. At high doses it affects a dopaminergic pathway in the brain that is associated with motor control. This is why manganese toxicity causes Parkinsonian-like symptoms, such as tremor and rigidity in humans.

But another dopaminergic pathway reinforces behaviors such as eating or sex. What if low levels of manganese modulated feeding through this pathway? Perhaps manganese offered a handle, a tool, to manipulate the reward circuit and to better understand how it works.

To make the connection between diet and behavior, Ben-Shahar needed to be able to quantify tiny amounts of neurotransmitters (chemicals that transmit signals between neurons) in bee brains. He contacted coauthor Andrew Barron of Macquarie University in Australia. Eirik Søvik, the first author on the paper, was then a doctoral student in Barron’s lab and is now a postdoctoral research associate in Ben-Shahar’s lab.

The two labs collaborated to study levels of these molecules in the brains of fruit flies and honey bees fed differing levels of manganese. They also tracked the bees by attaching radio-frequency tags to them when they were a day old—and “still soft, fluffy, and unable to sting you,” Søvik says.

In both honey bees and fruit flies, exposure to manganese at levels considered safe for humans increased brain levels of dopamine and octopamine, a neurotransmitter important in insects.

At the higher exposures it also altered the behavior of the bees, which became foragers sooner than normal, but made relatively few foraging trips, perhaps because they got lost or tired.

“Manganese is not the number one dangerous thing out there in the environment,” Ben-Shahar says. “Nor do we know if it affects our brains the same way it does those of insects. Nobody has done the studies. But even if it has no impact on us, it clearly affects bees, and we depend on bees for most of the fruits and vegetable in our diets.”

Diana Lutz is a senior science editor for Washington University–St. Louis. This article was previously published on Futurity.org under CC by 4.0.