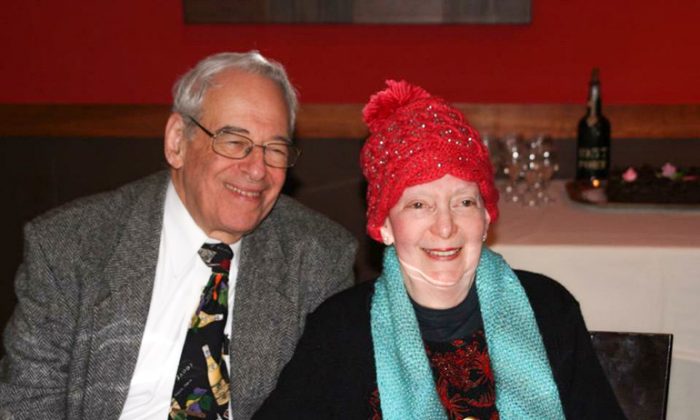 Bob and Ellen Gutenstein celebrate Ellen's birthday three months before her death. (Courtesy of the Gutenstein family)
Good to Know

As Ellen Gutenstein lay in her bed at home, dying from lung cancer that had metastasized in her brain, a heart-wrenching Mother’s Day card arrived from her granddaughter. Neither Ellen’s daughter nor her husband felt they could read it to her without breaking down.

Fortunately, a volunteer from the local hospice’s doula program was on hand to help Ellen, who was a resident of Ridgewood, N.J., die comfortably at home. The volunteer picked up the letter and read it with compassion.

The doula not only made my mom’s life easier—she made our lives easier, too.
— Lisa Silvershein, Ellen's daughter

“I’m not sure I could have done that,” said Lisa Silvershein, Ellen’s daughter. “The doula not only made my mom’s life easier—she made our lives easier, too.”

Doulas, an ancient Greek term that loosely means a woman helping another woman, have long comforted women during childbirth. But the definition has broadened, and doula programs—which train a combination of male and female volunteers and paid, certified staff—are increasingly helping elderly patients fulfill wishes to die at home rather than in hospitals or nursing homes.

Certified doulas specializing in end-of-life care are now found in at least a half-dozen states, including New York, Colorado, and Texas, said Henry Fersko-Weiss, executive director of the International End of Life Doula Association, which he co-founded in 2015. A social worker with hospice experience, he first came across the idea 15 years ago, when a birth doula told him that she was also offering comfort to the dying.

“I thought to myself, ‘This is exactly what we should be doing at [the] end of life,'” said Fersko-Weiss, who has since authored a book, “Caring for the Dying: The Doula Approach to a Meaningful Death.”

In 2003, he set up what he says was the nation’s first end-of-life doula company to train people to care for the dying. Fersko-Weiss helped create the doula program at Valley Home Care in Paramus, N.J., which assisted the Gutenstein family.

While most hospice workers focus on the physical needs of the dying, doulas offer emotional and spiritual support.

The doula association trains and certifies professional end-of-life doulas. Certification requires 22 hours of classes that cost about $600 for those who hope to make a career of it. Volunteer doulas complete 18 hours of training, with costs typically paid by a sponsoring hospital or hospice.

“Nobody should die alone,” said Ellen Rand, a longtime hospice volunteer, blogger, and health journalist. Finding a doula is a proactive step that families facing terminal illnesses can take. “I’ve never come across anyone who has done too much end-of-life planning—it’s usually just the opposite,” she said.

The end-of-life doula movement is supported by the National Hospice and Palliative Care Organization. “As long as they go through a training process, I think they can complement the work of the hospice team really well,” said John Mastrojohn III, the organization’s executive vice president. “The more people there to help a patient and family the better.”

While most hospice workers focus on the physical needs of the dying, doulas offer emotional and spiritual support. They often help the dying reflect on life’s meaning. They read to patients or play their favorite music. Doulas also explain signs and symptoms of dying to the family and help them know what’s coming next.

Volunteer doulas must be trained, pass background checks and health screenings, and offer three written references.
Shortly after Ellen, a Valley Hospice volunteer, was diagnosed with incurable cancer, the hospice connected her with Fersko-Weiss.

“To be honest, we weren’t sure if an end-of-life doula would work for us,” said Silvershein. “But we finally decided, what the heck, let’s give it a shot.”

It turned out to be just what the family needed. In Ellen’s final days, approximately eight different doula volunteers assisted her and her family, with one doula always by her side.

“They ended up making our lives easier—and hers,” said Ellen’s husband, Bob Gutenstein. “All along, the doulas helped us to know what to expect next—which is something most of us didn’t know.”

This included planning for Ellen’s final days, which the doula association refers to as “the vigil.” The doulas helped create a “vigil plan,” which detailed who should be in the room at her death and the sounds and smells she wanted around her.

The doulas frequently read the memory book to Ellen because they saw how happy it made her.

Doulas: What They Do and Don’t Do

When the family needed time away from Ellen’s bedside, the doulas frequently talked, read, or sang to her. One doula sang Ellen’s favorite song, “Over the Rainbow.”

There are things end-of-life doulas can’t do—at least in most hospital or hospice settings. Because they aren’t nurses, they aren’t typically permitted to physically care for patients, whether it’s changing bandages or administering medications. But in private homes, doulas and families can agree ahead of time on acceptable tasks, said Fersko-Weiss.

Doulas might give patients light massages, brush their teeth, and help a primary caregiver change their clothes and bedding, said Fersko-Weiss. Doulas also can help caregivers reposition someone in bed or apply cold compresses if a fever spikes.

Perhaps the most important thing doulas did for the Gutensteins was to constantly make everyone in the room—particularly Ellen—more comfortable.  “It was the doula who kept her positive,” said Bob Gutenstein.

Doulas give family members time to sleep, which can improve their decision-making. “The last few days, the doulas were there around the clock, which was really helpful for me,” said Silvershein.

The best way to find a volunteer end-of-life doula is via a patient’s local hospital or hospice, said Fersko-Weiss. But volunteers typically have limited availability.

Trained and certified professional doulas cost $40 to $100 per hour, Fersko-Weiss said. Some charge flat rates for initial visits and during a dying patient’s final days when round-the-clock vigilance is often needed. Costs for that end-stage service typically range from $1,200 to $4,000, he said.

At the moment, medical insurance does not cover paid doula services, said Fersko-Weiss. But just as some insurance companies are starting to offer partial reimbursements for birth doulas, he predicts that families may eventually receive some reimbursements for end-of-life doulas.

Ellen’s doulas were volunteers, and her family later showed their thanks by giving a substantial donation to the hospital’s doula unit.

Knowing what they know now, said Bob Gutenstein, they would have happily paid for the services if volunteers were not available. It was, after all, the doulas who recognized the signs and alerted the family that Ellen’s death was imminent.

“We wouldn’t have had this confirmation without them,” Silvershein said.

It gave Bob Gutenstein—who had been dozing at his wife’s bedside—his final moments with his wife, which he might have otherwise missed. After the doula alerted him to Ellen’s last breaths, “I reached over, and she gave me a squeeze,” he said, “and then, she was gone.”

Kaiser Health News, a nonprofit health newsroom whose stories appear in news outlets nationwide, is an editorially independent part of the Kaiser Family Foundation. This article was republished under Creative Commons CC BY 4.0 license.