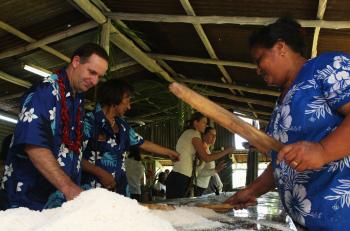 BY Louise McCoy TIMEAugust 3, 2010 PRINT
“If humans were to appear on the Earth with no more than a coconut palm, they could live quite happily and contented for all eternity”—an Arab proverb.

It seems ironic that we spend millions on laboratories, tens of thousands for doctorate degrees plus the many accoutrements of “science,” while a perfect food with natural antibiotics, cosmetic properties, and nutrition grows in abundance in the tropics.

The coconut, which has been spotted floating as far north as Norway, travels to shores around the world by boat and on its own has been establishing coconut tree colonies for about 70 million years. Its land origin is disputed. Perhaps it came from Lemuria or the Isle of Mu—legendary prehistoric islands in the Pacific.

The simple processing that has been used for hundreds, maybe even thousands of years, preserves all the nutrients. Some coconut orchards have kept these methods, only adding some modern machinery so farmers can join the modern economy without giving up their natural lifestyle.

The coconut oil written about in this article is organic, virgin coconut oil. Refined coconut oil, although it sounds better, has fewer nutrients, has added chemicals, and sometimes trans fats. (Tropicaltraditions.com/what_is_virgin_coconut_oil.htm)

A component of coconut oil is lauric acid. Mother’s milk is the other main source of this nutrient, and many infant formulas include coconut oil derivatives. Lauric acid is the most potent ingredient in mother’s milk for strengthening the baby’s immune system. It has strong antimicrobial properties because the baby converts lauric acid into monolaurin.

By dissolving the lipid membrane of microbes, monolaurin inactivates viruses, bacteria, and protozoa such as HIV, measles, herpes simplex, and cytomegalovirus. Would we really need to give newborns vaccines if they are being breast-fed?

Monolaurin is selective about what microbes it kills. It will go after Helicobacter pylori, the ulcer virus, without harming any of the good bacteria of our digestive system the way antibiotics do. (Treelight.com/health/nutrition/CoconutOil.html)

Research suggests that herpes or Cytomegalovirus causes arterial plaque or clogging of the arteries. If so, eating coconut oil should help clean the arteries.

After we were weaned, where did the lauric acid come from? In the olden days, coconut oil and palm oil were used extensively as shortening both in home cooking and processed foods. Lauric acid is also present in small amounts in heavy cream and in whole milk.

Until 1998, coconut oil was used as “butter” for popcorn in movie theaters. Macaroons, if made with desiccated coconut, could have as much as 6 grams of lauric acid in each cookie. Since the 1960s, canola oil and other vegetable oils have replaced coconut oil in processed foods

My father, a naturalist very familiar with the tropics, always said coconut oil was the best sunscreen. We never got to try it out as coconut oil was not sold in drugstores and was hard to find elsewhere.

It turns out that some people do find coconut oil very good at preventing sunburn, especially if they also eat it. The oil gives you an oily sheen, making you look very shiny. Its SPF is 4, and it blocks 20 percent of UV radiation.

The advice on blogs is to let it soak in for several minutes before sun exposure. In cases of burning, coconut oil has alleviated pain, prevented blistering, and even tanned the burned place. (Passionatehomemaking.com/2009/04/natural-sunscreen-choices.html)

It is estimated that 10 percent of coral reefs worldwide are threatened by the 4,000 to 6,000 metric tons of sunscreen that is washed off swimmers every year. The chemicals in commercial sunscreen awaken dormant viruses in symbiotic algae living in reef-building coral. (News.nationalgeographic.com/news/2008/01/080129-sunscreen-coral.html) Coconut oil is antiviral. Could this be one way to protect coral reefs?

Mary G. Enig, Ph.D., from The Weston A. Price Foundation, estimates that adults should get 10 to 20 grams of coconut oil per day, which would be contained in about three tablespoons of coconut oil or two to three coconut macaroons.