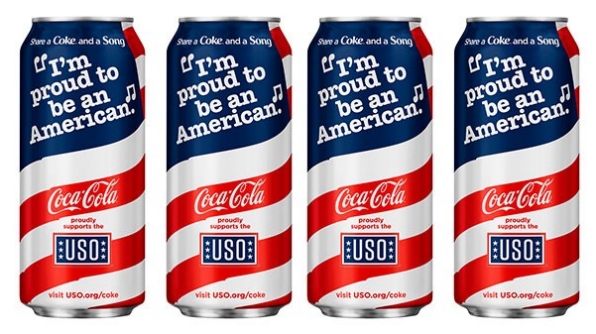 Coca Cola released new design for its cans featuring an American flag and a line from a patriotic song on the Memorial weekend.

The can will be available in convenience stores until the 4th of July, the company stated on its website.

The writing on the can says, “I’m proud to be an American,” a line from the patriotic song of the same name.

The can also features the logo of the United Service Organization (USO) in honor of its 75th anniversary.

USO has been providing services and entertainment to the U.S. troops since the 1941.

The shout out from Coca Cola is one part of a series of events and campaigns to celebrate its anniversary.

Another part is its “Thanks a Million” campaign inviting public to send one million messages of support to the American troops.

According to the campaign’s website, over 220,000 messages have been sent so far.

Well known for its entertainment programs, USO also plans “handshake tours with a robust rotation of NFL players and coaches meeting and engaging with American troops at home and overseas” to mark its 50-year partnership with the league.

Coca Cola stated it has been a USO partner since the non-profit’s inception.

Coca Cola Company experienced declining profits and revenue in the past four years while soda consumption in the U.S. declined to its 30-year low last year, Fortune reported.

In recent years the country even lost its label as the worlds biggest soda consumer per capita, though it seems to have been caused more by significant increase of consumption in other countries than by the decline in demand in the U.S..

The country’s per capita soda consumption was still well over 40 gallons a year in 2015.

Yet Coca Cola’s 2014 “Share a Coke” campaign likely helped to boost the Coke brand in the declining market, Fortune wrote.