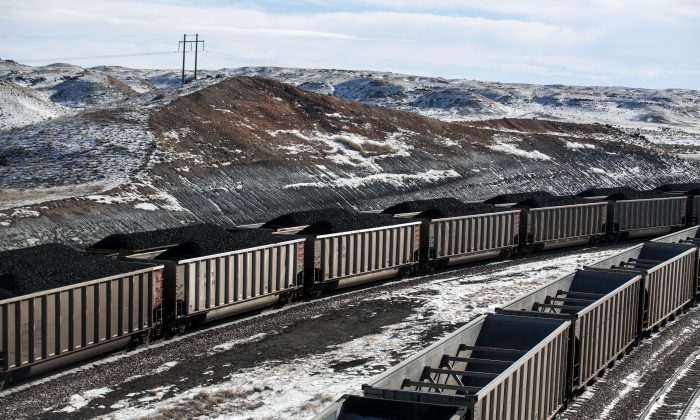 Rail cars are filled with coal and sprayed with a topper agent to suppress dust at Cloud Peak Energy's Antelope Mine north of Douglas, Wyo., on Jan. 9, 2014. (Ryan Dorgan/Casper Star-Tribune via AP)
Business & Economy

CHARLESTON, W.Va.—The chief executive of one of the nation’s largest coal producers, Murray Energy, made an emotional call Wednesday for steep cuts in state mining taxes to support an industry in free fall.

Raising his voice frequently during a 38-minute speech, Robert Murray blasted politicians for “platitudes and lip service” as the coal industry sheds thousands of jobs and producers go bankrupt. He called on state leaders to drop the coal severance tax from 5 to 2 percent, saying coal has paid more than its fair share to West Virginia already.

“These government officials can no longer say that they support coal people in this state” if they don’t, Murray told the West Virginia Coal Mining Symposium.

Taxes could be raised on tobacco and alcohol, natural gas production and professional services to make up for the break for coal, he said.

Democratic Gov. Earl Ray Tomblin has proposed dropping a 56-cent-per-ton surtax that generated $64 million last year to help pay off a workers’ compensation debt. But the governor’s budget office says reducing the severance tax can’t be considered, because doing so would cost more than $100 million annually and add to the pain of cash-strapped counties, said Department of Revenue spokeswoman Lalena Price.

West Virginia already expects a $384 million gap this budget year and a $466 million gap in 2017, largely because coal and natural gas severance tax dollars have fizzled.

Murray singled out trial lawyers as he called for higher taxes on professional services. Natural gas production also needs to be taxed more, he said.

“Natural gas is replacing coal generation,” Murray said. “Should not their tax rate be examined?”

Murray, who bankrolls Republican candidates, blasted President Barack Obama for policies aimed at reducing airborne pollution from coal-fired power plants. His voice rose to a shout as he called the president “the greatest enemy I’ve ever had in my life.”

Murray didn’t spare the Republican majority in Congress either, saying the House and Senate “have done nothing for coal in the last two years.”

Many other factors, from cheaper fossil fuels and renewable energy to tougher-to-reach seams, have also combined to devastate Appalachian coal.

Jim Justice, a billionaire coal producer running for governor as a Democrat, said the cut would be irresponsible now. In a news release, he said a lower severance tax “will not reopen one coal mine or put one miner back to work.”