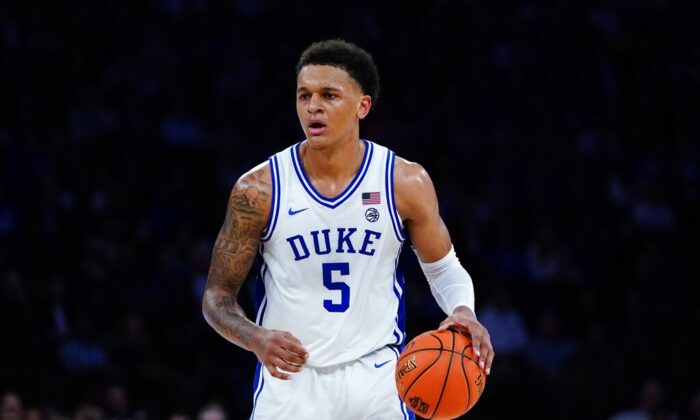 Duke's Paolo Banchero (5) looks to pass during the first half of an NCAA college basketball game against Kentucky in New York, on Nov. 9, 2021. (Frank Franklin II/AP Photo)
College Sports

Krzyzewski announced that he would retire at the end of the season. The Hall of Famer has won 1,098 games and five national championships in his 42 years coaching the Blue Devils. Overall he has 1,171 wins, the most in the history of the sport.

The two basketball blue bloods, who have quite the history between them on the game’s biggest stage, put on a spectacular show to open the season. The loud split crowd at Madison Square Garden that included many members of the New York Knicks and Bruce Springsteen was on its feet for most of the second half.

Duke, which led by four at the half, built the advantage to 15 with just under 10 minutes left behind Keels.

The Wildcats wouldn’t go away, scoring the next 11 points to get within 69–65 on a three-point play by Oscar Tshiebwe with 6:07 left.

That’s as close as Kentucky could get. Keels scored on the Blue Devils’ next possession and Banchero followed with a three-point play after a huge block by Mark Williams to start a 7–0 run.

Kentucky could only get within eight the rest of the way.

Tshiebwe finished with 17 points and 19 rebounds. Sahvir Wheeler added 16 points and 10 assists for the Wildcats.

With this being Krzyzewski’s last game at MSG, the Garden front office staff presented his family with a few gifts before the game.

They made a donation to the Emily K Center and gave him a framed photo mosaic that had more than 300 images from his time at MSG.

Finally, they gave him six bottles of wine, each with a custom label from some of his top moments at the Garden, including his 1,000th victory and one from when he was a player for Army and his team played South Carolina at MSG.

Duke’s sensational freshmen didn’t disappoint and could carry the Blue Devils a long way this season.

Kentucky looked good in spurts and the early season loss will only help the Wildcats get better.

Cheering On Their Schools

The Knicks players were divided with their rooting interests.

They were all sitting courtside.

Obi Toppin didn’t go to either school, but his brother Jacob plays for Kentucky. The Knicks’ second-year forward was sitting with his mom Roni, who was celebrating her birthday.

Krzyzewski has gone 34–11 at MSG, including winning five of the last six there. The Blue Devils are 39–18 overall at the arena.

The Champions Classic will be extended through 2025. It started in 2011 and has always had Michigan State, Kansas, Duke and Kentucky participating.

Duke improved to 7-4 at the Champions Classic.

Duke has had the best of the rivalry recently. The Blue Devils have won five of the last six against the Wildcats.