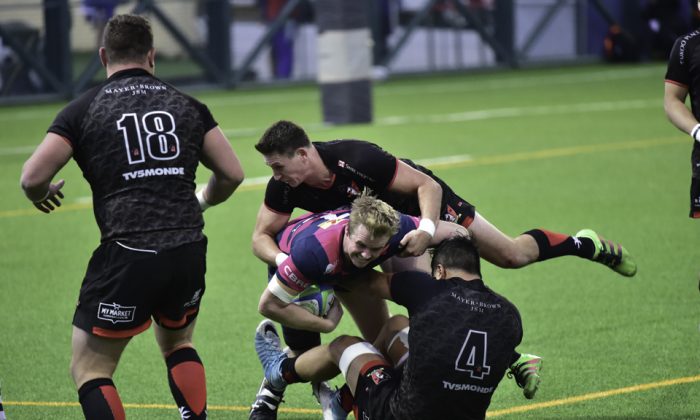 HONG KONG—Natixis Hong Kong Football Club outplayed and outclassed Society Générale Valley 35-3 on Saturday to provide their coach Phil Bailey a fitting farewell in his final match in charge at Sports Road. The victory places HKFC at the top of the Premiership over the Christmas/New Year break, tied on points with rivals Valley and Tigers (all three teams have 34points), but HKFC has the superior points difference, by a substantial margin.

HKFC controlled the game. Valley never posed a threat, that wasn’t readily negated by the HKFC defense. HKFC kept their rivals tryless throughout the match to add extra gloss to the five-try bonus point victory. It was the manner in which HKFC tore Valley apart that impressed, and augurs well for Hong Kong rugby if this can be translated to the national team.

HKFC looked sharper from the outset, but could manage just one try in the first half, from winger Josh Birch, who cut through the Valley defense. The try was converted by fullback Glyn Hughes, who added two penalties during the half. Valley flyhalf Ben Rimene slotted a penalty for the visitors midway through to put points on the board, but by half-time HKFC led 13-3. HKFC had dominated possession and territory; although Valley looked competitive on the scoreboard, HKFC looked superior on the pitch. The Valley pack contested well against HKFC, but it was the speed of the HKFC backs, and support play by the HKFC forwards, particularly Number eight Marcus Slade and lock Jevon Groves, that stretched the Valley defense.

The second half was one-way traffic.  HKFC played exhibition rugby: Valley had no response. The pace of the game increased, the sharpness of the passing improved and HKFC turned defense into attack on a number of occasions. Valley looked flat-footed. On 48 minutes, after Valley had clawed into the HKFC 22, the ball was turned over. HKFC centre Ben Axten-Burret broke the Valley line, ran 40 metres before passing to his centre partner, Tom Isaacs, who deftly moved the ball to winger Marno Meyer, who powered over for try in the corner. They covered 75metres and left Valley floundering. The conversion was missed, but HKFC led 18-3, and sensed the game was theirs for the taking.

HKFC continued to pressure Valley: after carefully moving through the phases and retaining the possession, captain and hooker Mitch Andrews bustled over the line to stretch the lead to 23-3. Hughes added the conversion to move the score to 25-3.

Minutes later, Hughes finished a fine move created by Groves and flyhalf Russ Webb. The score gave HKFC a deserved bonus point, and a comfortable lead 30-3. Almost immediately after the restart, Andrews again crossed the Valley line and sealed the match with HKFC’s fifth try of the afternoon, making the final score 35-3.

It wasn’t so much the win, but the manner of victory which was so impressive. Valley had been totally outplayed in the second half, and had no answer to the pace of the HKFC game-plan; the skill of their support play, off-loading, speed of ball movement and creating space for players to run onto. Valley looked sluggish and need to find extra zip to their game if they wish to retain the Championship,

It was a hugely satisfying performance by HKFC, who deservedly lead the Premiership. In other results, Kowloon was awarded a 20-0 win over Herbert Smith Freehills HKCC, who were unable to field a team; Bloomberg Hong Kong Scottish, lost narrowly again, this time to Borrelli Walsh USRC Tigers, 23-24. At the year-end, HKFC lead the Premiership on 34points, with Tigers (2nd) and Valley (3rd) also on 34, separated by points difference. Scottish are 4th with 24points, Kowloon 5th with 23, and HKCC, bottom with only 8 points and a solitary win this season.

Finally, Hong Kong U19’s beat Sri Lanka 40-7, in the return leg, to build on their victory in Colombo last week (37-8), and emphatically win their 5th straight Asian Rugby Junior title and secure a place at the World Junior tournament in 2018.