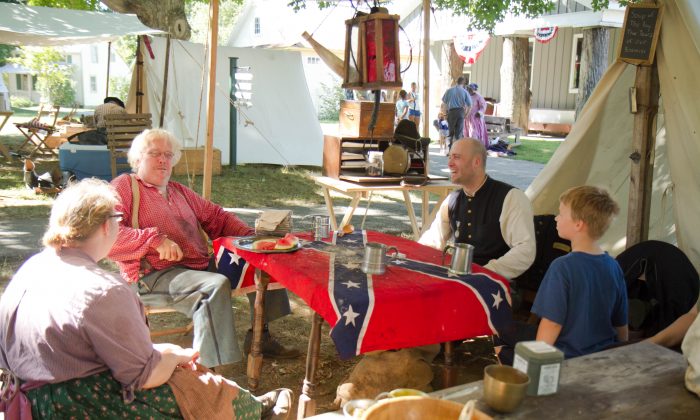 MONROE—It’s a close-knit group of people who spend their time, energy, and money traveling around the country to re-enact historical moments.

“It’s kind of like a real military in that we take care of each other,” said Gregory Belcastro, First Sergeant in the 7th New Jersey Infantry, Company A.

Belcastro was part of a Civil War re-enactment at Museum Village in Monroe over Labor Day weekend that brought together several companies from the tri-state area.

He said he knew most of the re-enactors there because they belong to a parent organization, the Second New Jersey Brigade, that has about 200 members.

While based in New Jersey, the club is not limited to those who live in the state—it has members as far west as Arizona, as far east as Maine, and as far south as Florida, Belcastro said.

He calls himself a history buff, but says what keeps him coming back is the camaraderie he’s found doing it.

Nick Pollack, who was a Lieutenant with the 50th Pennsylvania Infantry for the event, said many of the people he does re-enactments with are close friends he introduced the hobby to. He also meets a lot of people with like-minded interests through events like these.

“People find us in all kinds of different ways, either online or they come up to you at an event like this and say ‘Hey, how do I join something like this?'” he said.

Debra Thime, a re-enactor who wore a shirt with “Civil War Nut” written on it, said she was wearing her husband’s shirt because she couldn’t find hers, which said “Civil War Nut’s Wife.”

She is a seamstress by trade and likes to make period clothing, but initially wasn’t that interested in the history side of the re-enactments.

She made a sweeping gesture towards the encampment as she described all the clothing she had made for people there, pointing out her son-in-law’s outfit that she made at their last event.

As the day ended and people prepared to leave, they broke down their tents and packed the equipment into cars and trailers.

People said their goodbyes, not in a sad way, but as if they knew they would to see each other soon.