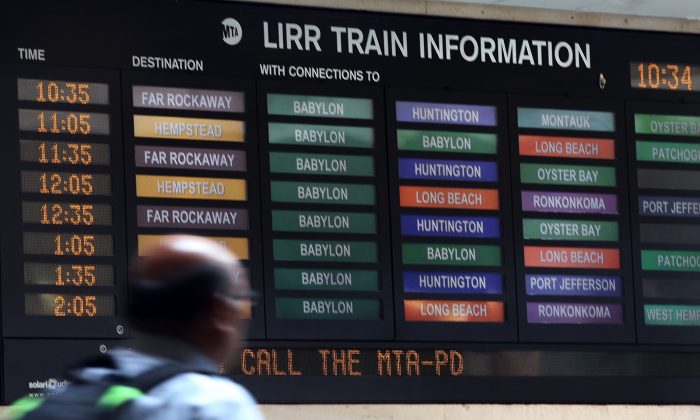 In this file photo, a man walks by a Long Island Rail Road (LIRR) schedule board on July 15, 2014 in the Brooklyn borough of New York City. (Spencer Platt/Getty Images)
New York

City and State Need to Step Up to Prevent Fare Hikes, Says MTA

NEW YORK—The Metropolitan Transportation Authority won’t be raising fares and tolls more than they had already planned to in order to cover the increased labor costs from the recent union settlements, officials said Monday.

Instead, the costs will be offset by higher than expected savings, retiree benefits, and capital funding. According to MTA’s CFO Robert Foran, this amounts to a $1.5 billion reduction of their capital funding capacity, but it is not clear how and which projects will be affected yet.

“This was not what we wanted to do, but it was the best of bad alternatives,” Foran said.

Come September, the MTA will present its capital budget to the state board.

“We need our other funding partners to step up,” said MTA board member Allen Capelli, referring mainly to city and state subsidies. “Our tests ahead of us are considerable.”

Over half of the MTA’s revenue comes from fares and tolls, dedicated taxes make up 36 percent, local and state subsidies make up 7 percent, and another 4 percent come from other sources. The MTA runs the country’s largest transit network and its assets total almost $1 trillion. In addition to keeping those assets in a state of good repair, which costs billions, there are several multi-billion dollar capital projects in the pipeline, like the Second Avenue Subway.

According to state comptroller Thomas DiNapoli, the MTA faces a $12 billion funding gap for the capital improvements it intends to make over the next five years unless local and state funding increases.

MTA CEO Tom Prendergast said it was premature to discuss whether that was the case, but in order to keep fare and tolls from increasing above inflation rates, more money would have to come from municipalities and the state.

The MTA had already planned to increase fares by 4 percent in 2015 and 2017—the annual 2 percent rate requested by the state instead of the previous 3.5 percent.

According to the report DiNapoli released, the MTA has already pushed back its schedule for repairs and modernizing equipment significantly. In its last five-year capital plan, there was a $9.9 billion funding gap and that was closed by borrowing and scaling back projects.

The MTA estimates spending $105.7 billion over the next 20 years, and even then it would not be able to restore all of its assets to a state of good repair. “Funding the capital program has been an ongoing challenge for the MTA,” DiNapoli stated.

MTA plans to invest $20 million per year to increase services and an additional $125 million over four years for operations and maintenance.

MTA also wants to add a weekday mid-day train on the West of Hudson line from Hoboken to Middletown.