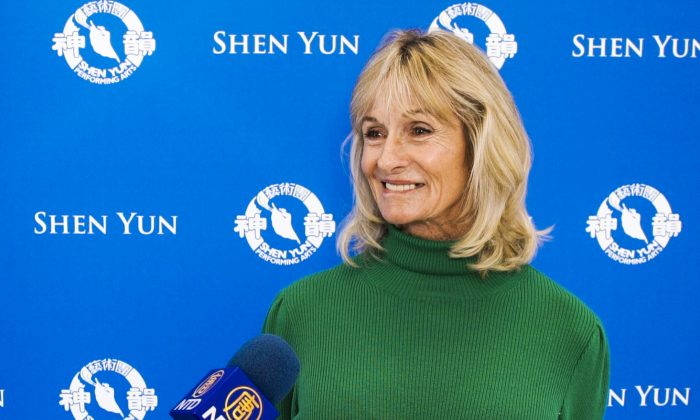 SALT LAKE CITY—Dancer and choreographer Bonnie Henderson has seen her fair share of dance performances, but none came close to what she witnessed at the George S. and Dolores Doré Eccles Theater on March 17.

“Extraordinary. I can’t even describe how I feel, the gratitude for seeing this amazing production. It’s the best I’ve ever seen,” Henderson said.

Henderson has been teaching dance since she was 16 and now works as a professional choreographer, and she has seen many great performances in her life. Yet Shen Yun was meaningful and inspiring through the beauty of its art in a different way.

“[I was] touched very deeply. I wept in the final number, the finale was—it’s perfection. Like I said, the dancing, the art, the music, everything combined,” Henderson said. “This exceeds anything I think I’ve ever seen.”

“It’s the most spectacular show I’ve ever seen, flawless. The artistry, the athleticism was beyond everything I’ve seen before. I’m going to go out and tell everyone to be sure they see this. I wish everyone could have this experience,” she said.

Henderson has long had an interest in Asian cultures, so she was familiar with the spirituality of traditional Chinese culture, which is said to be divinely inspired. That divine spark came through in the performance, and inspired her.

“I was so inspired,” Henderson said. “The message of the Divine Creator, all of it, and the responsibility each of us has to do our part to make our contribution as the one person. We do make a difference.”

The stories and history of ancient Chinese civilization is filled with deities, Buddhas, and Taos who coexisted with mankind, and Henderson was particularly interested in the miracles that occurred in various stories.

Every culture has a different name for it, Henderson said, but it’s all the same: a universal message of freedom and purpose.

“This production, Shen Yun, has a message for the world,” Henderson said.

If you haven’t seen it, “you’re missing out,” she added. “I’m going to make sure my family gets a chance to see this. They’re world travelers and they will appreciate it.”

With reporting by NTD Televsion.