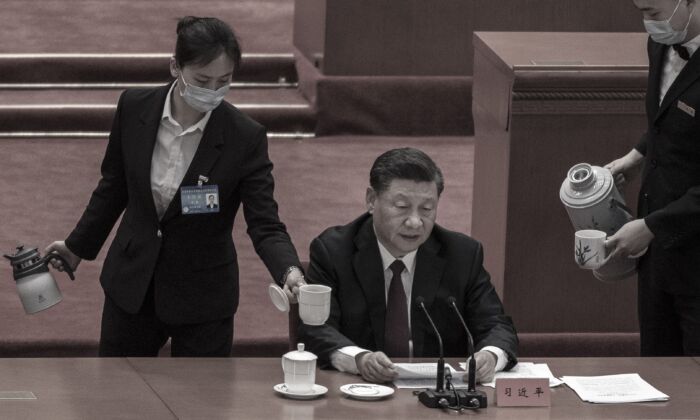 Chinese leader Xi Jinping, is served tea as he speaks during a ceremony at the Great Hall of the People in Beijing, China, on April 8, 2022. (Kevin Frayer/Getty Images)
China Business & Economy

Xi delivered the speech in the early afternoon of Tuesday in Wuhan city, ground zero of the COVID-19 pandemic. Almost immediately, investor confidence seemed to have dropped as the SZSE and SSE reacted accordingly to Xi’s remarks on enforcing the strict COVID policy. The SZSE shed 286 points or 2.2 percent. The SSE fell 1.4 percent. Hong Kong’s Hang Seng Index was also affected, dropping 1.88 percent.

Xi praised the CCP’s handling of the pandemic and claimed their COVID policy is the “cheapest and most effective” strategy compared to other countries’ measures to contain the pandemic, according to state-run media Xinhua.

However, Xi admitted that the current measures had not slowed COVID in the country.

“At present, the epidemic hasn’t stopped. We have to work hard to prevent the virus imported from overseas, and at the same time be alert of the relapses inside China,” Xi said.

Since mid-2020, the CCP has claimed that viruses from overseas cause COVID infections. For example, on April 14 this year, authorities in the capital city of Beijing blamed imported goods for causing an outbreak.

State-run Xinhua also reported that Xi told the local provincial and municipal government officials on Wednesday: “China has a big population. If we take the herd immunity policy to curb the epidemic, the consequences will be disastrous.”

According to official data, China’s population is over 1.4 billion, although some scholars believe the number should be around 1.25 billion to 1.28 billion.

In contrast to China’s “zero-COVID” policy, many countries use the herd immunity approach to curb infections.

Herd immunity, also called community immunity, is when a large part of the population is immune to the virus by vaccination or limited contact with the virus. Although not every single individual is immune, the group as a whole is protected from the virus.

The difference between China’s “zero-COVID” policy and the herd immunity approach is clear. Since January 2020, lockdowns have continued in several Chinese cities. Meanwhile, many countries have gradually eased their pandemic measures.

The quarantines may have caused the virus to spread in locked-down communities and neighborhoods. The shortages in food and medicines have made it difficult for the residents.

In April, a starving Shanghai resident wanted to get arrested for breaking quarantine rules so he could get fed in prison. He claimed he didn’t receive food for four days while he was sealed in his apartment. This was not an isolated case, as many people in Shanghai and other cities reportedly suffered from starvation due to the lockdowns.

In his speech in Wuhan, Xi ordered the regime to strictly enforce the “zero-COVID” policy even though “it affects the economic development,” according to Xinhua.

The strict pandemic measures include the following.

Shipping and delivery restrictions are imposed in areas hard-hit by COVID, such as the provinces of Guangdong, Liaoning, Zhejiang, and Shandong.

If a citizen receives an international package, his or her travel activities are monitored within seven days, and their health code color is changed to yellow.

Foreign visitors are required to quarantine at designated facilities upon arrival.

Imported products such as frozen foods are subjected to COVID testing.

In the past months, the Chinese regime locked down 25 million people in Shanghai—a major global financial hub—and its economy took a hit. According to official data, the output of Shanghai’s industries, located at the heart of manufacturing in the Yangtze River Delta, shrank 61.5 percent in April from a year earlier.

The city may have lost at least 27.7 billion yuan (about $4.13 billion) in April, according to a Shanghai netizen.

The lockdowns have affected China’s economy. The real estate market, which contributes 25 percent of China’s GDP, has been trending downward in recent months. Foreign investors continued to reduce their holdings of Chinese bonds in May for the fourth consecutive month.

The draconian measures have caused humanitarian disasters due to the lack of medical support. For example, elderly people and those needing emergency care were denied medical services. In addition, numerous suicides were reported in the media.