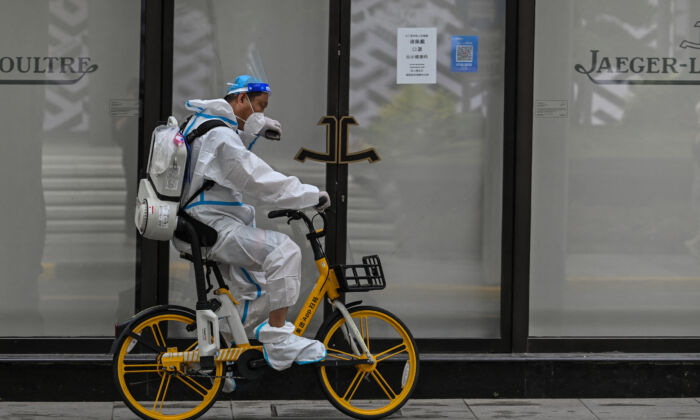 A worker rides a bicycle on a street in the Jing'an district of Shanghai on June 1, 2022. (Hector Retamal /AFP via Getty Images)
Business Columnists

Foreign investors continued to reduce their holdings of Chinese bonds in May for the fourth consecutive month. The divergent monetary policy between the United States and China, as well as a fundamental economic weakening, has driven foreign investors away from China in droves.

And unlike Chinese selloff periods over the last decade-plus, foreign investors no longer deem Chinese investments more attractive on a risk-adjusted basis compared to developed markets.

Chinese yuan-denominated bonds have suffered continued drawdowns, according to official data from China Central Depository & Clearing Co. The outflows have also hit the yuan currency, hitting its lowest relative value in almost two years. Since last June, the yuan has lost 3.5 percent versus the dollar.

Over the past ten years, the Chinese Communist Party (CCP) has been courting foreign investors by gradually opening up its massive financial markets to overseas investors. This is partially to offset outbound capital flows; Chinese companies and households have sent money abroad to snap up foreign assets such as real estate and business investments.

Global investors were happy to oblige. Turning a blind eye to China’s totalitarian regime and its human rights abuses, foreign investors have sent dollars to China to invest in monetary assets as well as to set up local businesses to capture the Chinese market. For some time, Chinese markets provided some diversification, as Chinese bonds offered higher yields during periods of near zero bond yields in the West.

In many ways, foreign investors were there to bail out Chinese markets time and again over the last decade.

But things have quickly changed. Foreign investors are leaving in droves and there’s little reprieve in sight.

Driven by an increasingly divergent central bank policy, U.S. Treasurys now provide a higher yield than their Chinese government bond counterparts. China’s economy, roiled by ongoing COVID-related shutdowns, is in its worst shape in decades with consumer and business confidence sagging. And lastly, China’s unflinching support for Russia in its invasion of Ukraine has increased the geopolitical risk of businesses operating in China. Will China attempt to annex Taiwan in the near future? That’s a question companies investing in China must ponder.

There are some signs the selloff is easing, especially in the Chinese stock market. But in this economic environment, where fundamentals are far from stable and it’s just a matter of time until the next COVID lockdown is enacted, investors are pessimistic that the near future will hold different outcomes.

Just as Beijing and Shanghai begin to emerge from suffocating COVID lockdowns, the southern economic hotbeds of Shenzhen and Macau may be facing crippling restrictions.

The technology hub of Shenzhen has locked down several neighborhoods, and officials are enacting mass testing. Nearby, in the Asian gambling center Macau, a virus outbreak is threatening gaming companies operating in the city.

The Financial Times reported that total gaming revenues in Macau for the month of May were $413 million, a 90 percent drop from pre-pandemic levels.

Of course, the bonds of Chinese property developers continued to be traded far below par. But recently there were also signs of contagion spreading beyond the usual sectors. For example, the offshore bonds of Chinese conglomerate Fosun International suffered heavy losses in June, a sign that other heavily indebted companies may also be in trouble. Fosun, the owner of the Club Med resort, has subsidiary companies in the leisure, travel, and entertainment sectors and could burn cash if COVID-related lockdowns persist and consumer spending continues to wane.

The People’s Bank of China announced that qualified foreign institutional investors (QFIIs), including deep-pocketed foreign banks, sovereign wealth funds, and pension funds, will be allowed to invest in the domestic exchange market.

Beginning on June 30, the Chinese exchange market will grant foreign institutional investors access to certain securities not available on the interbank market, including riskier instruments such as asset-backed securities and derivatives, in addition to bonds. It should be noted that the exchange market is regulated by the China Securities Regulatory Commission (CSRC) whereas the interbank market (which QFIIs had access to since 2016) is overseen by the PBoC.

But will it work? Certain intrepid fund managers with a penchant for distressed investing may jump at this opportunity. But for the mainstream, with China’s COVID policy and the dark clouds above its economy, coupled with higher relative fixed-income yields in the United States, the Chinese market simply isn’t very attractive.