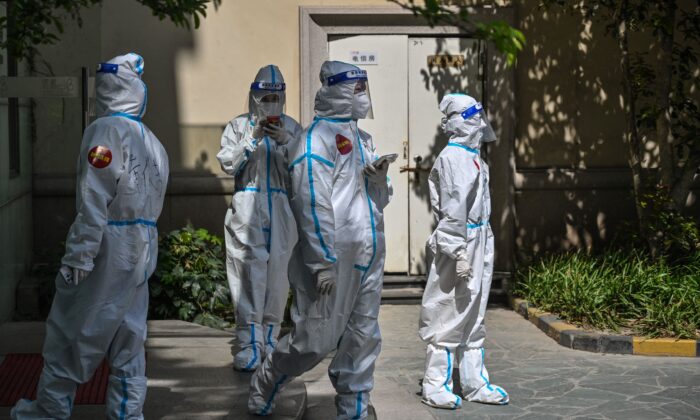 Workers in a compound where residents are being tested for COVID-19 during the second stage of a pandemic lockdown in Jing'an district in Shanghai on April 4, 2022. ( Hector Retamal/AFP via Getty Images)
CCP Virus

Many elderly people have died in aged care facilities amid a recent outbreak of COVID-19, known as the Chinese Communist Party (CCP) virus, in Shanghai. However, the authorities have not reported a single death so far.

Video footage provided by a resident showed people in white protective gear taking bagged bodies from a building to a hearse with a phone number and an ad for funeral events on the side of the vehicle.

“During the day [April 14] plus the early morning when we weren’t asleep, we captured in our video footage [the bodies of] 15 elderly people who had died being taken away,” a resident told the Chinese-language edition of The Epoch Times on April 14.

The resident lives in Shuxiangyuan Community Compound in Xuhui Community District in the west of Shanghai, overlooking an aged care facility named House of Orchid. She used the pseudonym Meiling and asked us to alter her voice so she wouldn’t be recognized, and wouldn’t be subject to retribution.

She said more dead bodies had been removed before midnight, and that a few seriously ill elderly people had been taken away by ambulance.

“But we have no idea what has happened to these ill elderly people,” she said in a phone interview.

She added that residents living directly across from the House of Orchid haven’t dared open their windows for the past two days, as it was horrible and scary to see hearses coming a dozen times a day and over a dozen dead bodies carried out in yellow bags.

She told The Epoch Times that there were still about 60 people living in the facility based on the number of takeaway lunch boxes she saw delivered to the facility on April 13.

“There are no medical facilities in there, and its management has been a mess,” Meiling said. She also noted that the elderly residents have underlying health conditions and that they should be transferred to hospitals for proper treatment.

“The mortality rate of the elderly is really frightening, and we have more people in the community who test positive for the COVID-19 virus. No one dares to go out, but still, we get more positive cases among those who live near the aged care facility.”

Meiling said that residents have called the local governments, various hotlines, and local media outlets, but no one has responded to the situation.

“If the nursing home does not transfer all these elderly people to a safe place, the mortality rate will continue to rise, and the residents living nearby also live in danger and fear. There’s no hope of our community being lifted from the restrictions,” Meiling said.

The Epoch Times reached out to the House of Orchid but did not receive a reply before publication.

Under the recent draconian lockdown measures imposed in Shanghai, China’s most populous city, there have also been complaints about alleged abnormal deaths of elderly people in other aged care facilities.

Sun Ying (a pseudonym) told the Chinese-language edition of The Epoch Times that her mother-in-law tested positive for COVID-19 and died on March 29 in the Donghai Elderly Care Hospital, the largest of its kind in Shanghai.

Sun said on April 14 that she called the hospital on March 29 and was told by the staff that her mother-in-law was being taken care of.

However, the family later learned that the elderly woman passed away at 10.55 a.m. that day, and Sun said that the death certificate did not identify the cause of death.

A doctor from the Donghai Elderly Care Hospital confirmed that there were 10 to 20 deaths among the elderly in the new building alone. “Almost all the senior people are positive for COVID-19, and many of us doctors haven’t had any rest for the past month,” he told The Epoch Times.

He said that he also had tested positive yet was ordered back to work before his quarantine period ended.

The Chinese-language edition of The Epoch Times reached out to the Donghai Elderly Care Hospital, and a female staffer admitted that cross infections took place in the hospital and that she herself was a close contact.

“Both the Shanghai CDC and the Oriental Hospital have intervened in our hospital, which is now under their management, ” she told our reporter.

When asked about the reasons for the deaths of the elderly people in the hospital, the staffer replied that the residents admitted to her hospital were “a special group” who were “long-term bedridden.”

“When we do not have an epidemic situation, it is normal to have 20 to 30 deaths every month. So we can’t say that it is abnormal for us to have deaths when an epidemic comes. Have you done any surveys? Have you found the pandemic death toll in China? Our elderly people all died of underlying diseases,” she said then hung up.

At least 20 patients died in past weeks at the Donghai Elderly Care Hospital, according to a Wall Street Journal report in early April.

The top health body of Shanghai reported 3,200 new confirmed cases of COVID-19, but no deaths, as of April 14 during the recent outbreak.

The actual number of confirmed cases and the death toll due to the pandemic remain unknown as the Chinese communist regime has habitually covered up data and information about the pandemic since the outbreak began in Wuhan in early 2020.