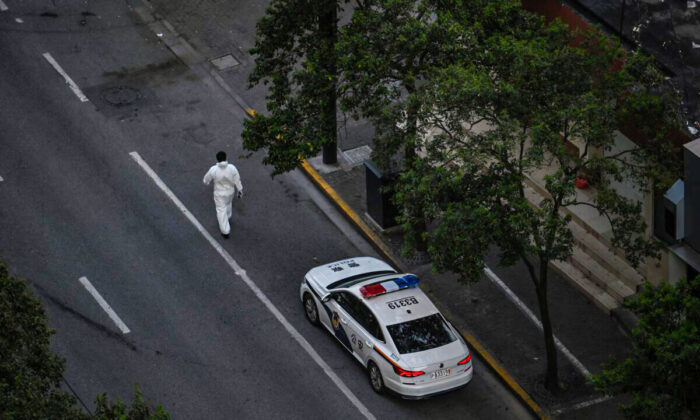 A worker, wearing personal protective equipment (PPE), walks next to a police car on a street during a COVID-19 lockdown in the Jing'an district in Shanghai on April 11, 2022. (HECTOR RETAMAL/AFP via Getty Images)
CCP Virus

‘I Have No Food!’ Shanghai Residents Protest As COVID-19 Lockdown Anger Mounts

Another video shows residents in the Kangting neighborhood struggling with a group of hazmat-suited people who were said to be police.

“I have no food! What are you going to do [with me]” a man yelled at people in white protective suits, then scenes of people yelling “we want supplies” from windows and balconies of high-rise apartments are seen.

These videos, which have been widely circulated on China’s Twitter-like Weibo, were reportedly shot in the Kangting community in Jiuting town of Shanghai’s Songjiang district on the night of April 8. Police allegedly shot into the sky to suppress the protests.

People there have been confined to their homes since April 1, according to the official notice from Jiuting town’s official Wechat account and local resident statements.

When The Epoch Times contacted the Jiuting Town Police Station about the protests, an unidentified police officer said they “already knew” what was happening in the video and that there were police officers at the scene to deal with it.

The officer refused to answer whether police fired shots. “Let me tell you, we already know [the scenes in the footage]. What you need to do is ‘not to believe in rumors or spread rumors,’” the police told The Epoch Times on April 9.

Public frustration and anger are growing over the zero-COVID policy as the prolonged controls have left them struggling to get food and daily necessities.

Shanghai was initially promised an eight-day lockdown starting on March 28 to curb the transmission of the fast-moving Omicron variant, while staggered testing was carried out. The restrictions have since been extended as infections continue to surge, leaving many unprepared to cope.

While the city officials repeatedly assured residents they would provide daily supplies, many complained the government food packages had not been delivered.

“Not just Kangting Community, [residents in] several communities were protesting last night,” a woman from another neighborhood of Tangting in Jiuting town said in a phone interview with The Epoch Times on Saturday.

People are dissatisfied with the lack of food and can’t get help from the residential communities despite making repeated calls, the woman using the surname Li said.

Li said she only bought groceries for a week because the authorities promised a four-day closure. Food is running out, but Li is unable to secure orders using overwhelmed grocery delivery apps.

“[I] really can’t get any food, not even a leek,” Li said. As a pregnant woman, she said her only wish was to feed herself, though she is under pressure to pay rent during the lockdown.

Another resident in Jiuting town, who gave his surname as Sheng, said vendors stopped delivering orders on April 8.

Shanghai officials have imposed restrictions from the Chinese regime’s zero-COVID playbook, which seeks to test, trace, and centrally quarantine all positive people to stem the spread of the CCP (Chinese Communist Party) virus.

Despite the strict measures, Shanghai reported another 26,087 cases on Monday. About 96 percent of infected people showed no symptoms. Residents and experts, however, suggest the outbreak may be more severe than what is officially disclosed, due to the regime’s practice of covering up information that it deems harmful to its image.

On Monday, city officials divided the city into over 7,000 areas and grouped residential compounds into three risk categories. People will be allowed to exit their homes only if no positive cases are reported in their neighborhood during a two-week timeframe.

But the easing is limited. People are still required to reduce unnecessary movement and not leave the street or town they live in. City official Gu Honghui said at a press briefing that a neighborhood compound could be sealed off again if a single case is reported.

The announcement came as the metropolis of Guangzhou tightened travel restrictions and announced mass testing of its 18 million residents after recording a handful of cases.

On April 5, analysts at Nomura estimated that a total of 23 cities are in partial or total lockdown. These cities, with a combined population of 193 million people, contributed to 22 percent of the country’s GDP, Nomura said in a note.

Luo Ya, Gu Shanshan, Gu Qing’er, and Reuters contributed to the report.