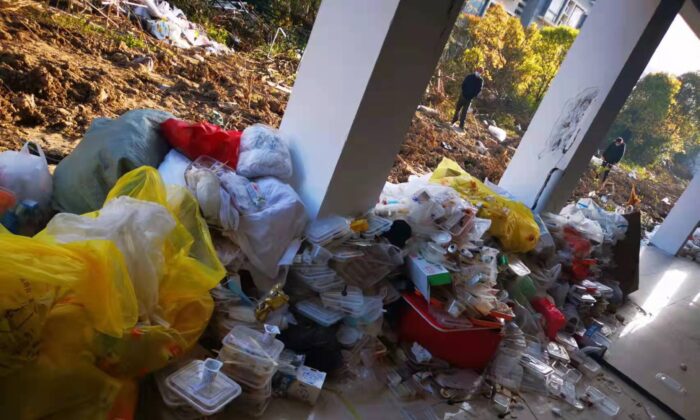 A dirty and chaotic scene captured at Nanhui makeshift hospital in Shanghai, China in April 2022. (Provided to The Epoch Times)
INSIDE CHINA

Shanghai Residents Tell of Death and Suffering During Strict Lockdown

The continuous pandemic lockdown of Shanghai has caused various hardships for residents. People are starving from lack of food and patients are struggling to get necessary medical treatment. There have been several deaths involving patients with acute but treatable illnesses, as they had to have a negative COVID-19 test result before being admitted to hospital.

When Chinese state media reported that Wu Jinglei, director of the Shanghai Municipal Health Commission, was quickly admitted to the hospital because he had a headache on April 19, readers asked angrily in the comments section, “Didn’t he also have to take a nucleic acid test?!”

Wu is currently receiving treatment at Zhongshan Hospital Affiliated to Fudan University for what was diagnosed as a vascular headache.

However, it is very difficult for ordinary citizens to receive medical treatment in a timely manner.

Yu Ying (pseudonym), who lives in Shanghai’s Minhang District, told The Epoch Times that she learned from friends on social media that a young man recently died in a hospital lobby waiting for his COVID-19 test result.

“People are saying that a few days ago a young man went to the hospital with his mother because of chest pain. Although he had a negative COVID-19 test certificate from his community’s PCR testing, the hospital refused to accept it. He had to pay 40 yuan (about $6.20) to have another test done by the hospital,” Yu said.

While enduring the pain in his chest, the young man died hours later, waiting for the test result, with his mother in the hospital lobby.

“His mother told others that the last words he said were, ‘Has my test result come out?’ Two hours later, it was the negative result he expected—but it was too late. He left behind his wife, parents, and a five-year-old child,” Yu said.

Wu Lin (pseudonym), a resident of Shanghai’s Xuhui District, told The Epoch Times that many people were taken to quarantine locations, but the conditions at the site were deplorable. There was no separation between one bed and another. People basically lived together regardless of gender. Some had no symptoms on arrival, but got ill at the quarantine facility because of cross-infection, yet the whole site was left unattended. Residents formed a social media group to share information with outsiders and to cry for help, but their chat group was quickly blocked, Wu said.

“A woman and her baby, who was just over 20 days old, were also sent to the makeshift hospital for isolation. Photos she sent to friends showed that the makeshift hospital was semi-finished and had cement flooring,” Wu said. “People inside have to wear masks 24 hours a day. Her husband and mother-in-law are very worried about her and the baby, and tried to seek help on social media. All of their messages and pictures were deleted by internet police. What can ordinary people do about it? Even Wang Sicong’s Weibo account was banned.”

Wang Sicong is a well-known figure in China, as his father is Wang Jianlin, chairman of Wanda Group, a Chinese multinational conglomerate. The younger Wang is a board director of the company. On April 19, he posted on Weibo: “The nucleic acid test every morning is not a test about negative or positive, but a test of your servility and boldness. Starting today, I will not go out to do nucleic acid [test] again.” His Weibo account was subsequently suspended.

Yu Ying shared some details about her own family.

“We are forbidden to step out the door except to get the nucleic acid test every day. For such an extended lockdown, we were only given five pounds of rice. As a household of five, we don’t even have enough rice to make porridge. The community distributed vegetables three times and meat once. The vegetables were all rotten and the meat was stinky,” Yu said. “The government touted on TV every day that there was enough food for us Shanghai residents, but what we experience here is that people who complain about starvation are being taken away and silenced.”

Yu also said that the most pitiful were the non-permanent residents of Shanghai. She knows of a business owner from neighboring Zhejiang Province whose business was suspended immediately after the lockdown began.

“He couldn’t pay the employees, and he owed bank loans. He later committed suicide by hanging himself,” Yu sighed.