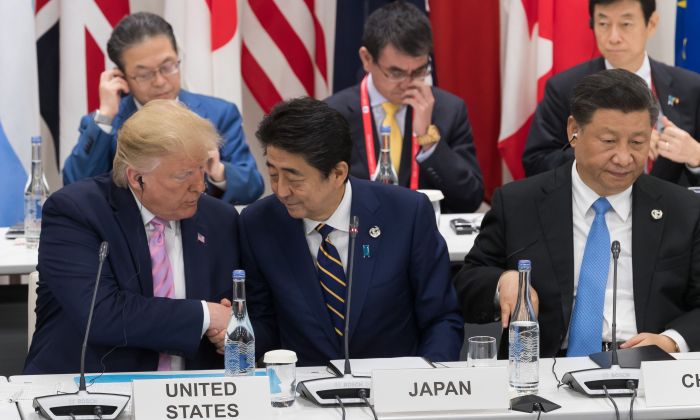 US President Donald Trump (L) shakes hands with Japan's Prime Minister Shinzo Abe (C) as they sit beside China's President Xi Jinping as they attend a meeting on the digital economy at the G20 Summit in Osaka on June 28, 2019. (JACQUES WITT/AFP/Getty Images)
US-China Relations

Chinese state-run media has published several commentaries about the recent meeting between U.S. President Donald Trump and Chinese leader Xi Jinping on the sidelines of the G-20 summit in Japan, expressing concern that future trade talks between both countries may not yield the results Beijing wants to see.

On June 29, Trump and Xi held an 80-minute closed-door meeting, in which both leaders agreed to resume trade talks.

China’s Ministry of Foreign Affairs spokesman Geng Shuang commented on the Trump–Xi meeting during a routine press conference on July 1.

Geng said Trump and Xi had a “successful” meeting, in which they made an “important consensus” to resume the trade talks.

It also emphasized the importance of the two countries’ trade relationship. “This year is the 40th anniversary of U.S.-China diplomatic relations … The bilateral trade volume has increased from $2.5 billion in 1979 to $633.5 billion in 2018.” These numbers come from Chinese customs data.

But the commentaries also expressed concerns about how future trade talks would go.

“Because the U.S.-China trade talks have encountered setbacks more than once, people have concerns about how far the new round of trade talks can go, as well as whether U.S.-China can make an agreement,” Global Times said in a June 29 editorial.

It also stressed that the Chinese side would want results it wants to see. “The U.S. always says that it wants a good deal. China also wants a good one … Only a win-win agreement can be signed by both parties.”

The Chinese Communist Party’s mouthpiece, People’s Daily, similarly expressed worries that the United States wouldn’t stick to commitments made during the Trump–Xi meeting.

In a June 30 commentary, it said that “only by performing commitments made” can the trade dispute be resolved, though it didn’t clarify exactly what those commitments would be.

In the Xinhua commentary, it also opined that “both parties must respect each other’s core interests and major concerns; and not challenge the other party’s bottom line.”

Beijing has hinted before what it considers its bottom line.

The Wall Street Journal quoted on June 27 anonymous Chinese officials who said the Chinese side would insist on three demands: removing its ban on the sale of U.S. technology to Huawei; lift all punitive tariffs; and drop efforts to persuade China to purchase more U.S. exports.

Zhang Tianliang, a frequent commentator on Chinese history and politics, published a commentary on the Chinese-language Epoch Times on June 29 in which he said Beijing has actually given up on some of those “bottom line” demands in the Trump-Xi meeting.

While Trump has agreed to allow U.S. companies to partially sell to Huawei, tariffs remain in place and Trump has said Xi agreed to buy more U.S. goods.

“Looking at the facts, we can see that the CCP lost its solid requirements,” Zhang wrote.

In addition, U.S. officials have publicly said they hope trade negotiations will resume to the point before trade talks broke down in early May, due to Beijing reneging on commitments made during prior talks to enact broader economic and trade reforms.

Now, Zhang said Beijing agreeing to resume trade talks suggests that they will agree to some of those U.S. demands for broader reforms, while dealing with the U.S. sanctions.

Since May, the U.S. administration raised tariff rates on $200 billion of Chinese goods, while Huawei and five Chinese supercomputer firms have been placed on a U.S. export entity list.

Zhang posited that the reason why Xi agreed to meet with Trump at G-20 is because China’s economy has been suffering since the trade war began.

China’s National Bureau of Statistics released the latest Purchasing Managers Index (PMI) on June 30, which was 49.4 percent, representing a drop in new purchases.

Also, the employment index of PMI was 46.9 percent, meaning the manufacturing business hired fewer people than in May.