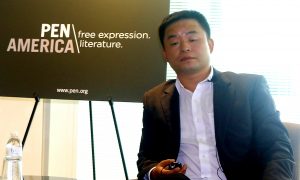 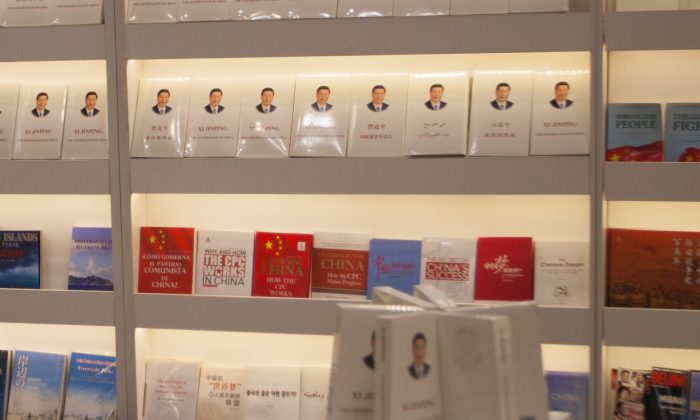 Copies of Chinese leader Xi Jinping’s collected speeches and writings on display at BookExpo America in Javits Center, New York City on May 28, 2015. China was the guest of honor at the annual book event. (Larry Ong/Epoch Times Staff)
China

NEW YORK—For years, Chinese communist ideologues have complained that the People’s Republic of China does not have enough “discourse power” (from the Chinese term, “huayu quan”)—meaning, the ability to speak and have others listen, and determine the bounds of debate—in international affairs.

Their wish seemed to have come true at a recent publishers’ event in New York City, though. China was the guest of honor at BookExpo America, held at the Javits Center from May 27 to May 29.

There were over 500 Chinese exhibitors occupying 25,000 square feet of floor space.

But despite the abundance of discourse power, it was far from clear that the message was actually getting out.

Bookcases were filled with volumes that set forth China’s ambitions, such as “China Dream: Great Power Thinking and Strategic Posture in the Post-American Era” and “The China Horizon: Glory and Dream of a Civilization State.”

There was an entire section stacked with books that could fairly be understood as anti-Japanese propaganda, though ostensibly treated as the “Pacific War Against Japanese Aggression.” This was exemplified by the mammoth compilation, “Japanese Invasion of China in Pictures”—a 25 volume, 25,000 photograph, 2.5 million word project that took 15 years to complete—which was presented to the Harvard-Yenching Library by the publishers. Anti-Japanese feeling was, banners suggested, a “spiritual base” from which both countries “can build a new bilateral relationship.”

But when it came to presenting their ideas to an audience, the Chinese organizers seemed to be preaching to the choir. The event about Xi Jinping’s collected wisdom was attended almost solely by Chinese people, most of them from state-run media outlets, and people like the vice head of the government agency that censors books, Wu Shangzhi, gave speeches, apparently without irony.

Another highlight was the launch of a book about the founder of communism, “Karl Marx for Young Readers.” The Chinese author, Han Yuhai, extolled the achievements and virtues of Marx and communism, which was described somewhat dubiously as a “‘specter’ permeating and benefiting the world.” Han said the article was highly popular among Chinese students, while melancholic piano music could be heard in the background.

The PRC’s main representative was the China Children’s Press & Publication Group, “the only national-scale professional children’s publisher in China,” according to Xinhua, the state mouthpiece. The CCPPG is directly managed by the Communist Youth League, the Communist Party’s mass organization for young adults.

This heavy ideological background might hamper success of the CCPPG’s publications in the United States. Unlike the children’s publishing industry in other countries, Chinese children’s publishing seem to be heavily focused on what they call “realism,” a hallmark of the Party’s broad suspicions of the potentially subversive nature of fantasy. In 2011, for example, Chinese media authorities famously banned television dramas that featured time-travel, because such devices were said to “treat serious history in a frivolous way.”

A book titled “Dragon’s Hometown” seemed as though it would buck this tendency, but upon inspection, it turned out that the only dragons in the book were dragon dances—the kind done by humans—and fish that jump out of the water. Nary an actual dragon was evident. Another volume discussed the “achievements of realistic children’s fiction,” which addresses “children’s mental and psychological world in a more direct and empirical manner” than fantasy.

Organizers evidently spent much effort attempting to make their sizable area attractive to Americans, with a tea brewing exhibit and a gallery inviting passersby to explore the history of Chinese printing, but the atmosphere was still that of a quiet library.

But on the first two days of the expo, few publishers and event attendees strolled through the open spaces between shelves. Staff played with their smartphones, and sometimes dozed off.

Qi Yu, a particularly bored-looking director of the youth books section at Jilin Publishing Group, said he had “quite a bit of action” on the book expo’s first day, but “nothing” on the morning of the second. He resumed staring at his table when his questioner left, listening to his headphones. Three hours later, he was observed sitting in the same spot, with the same expression.