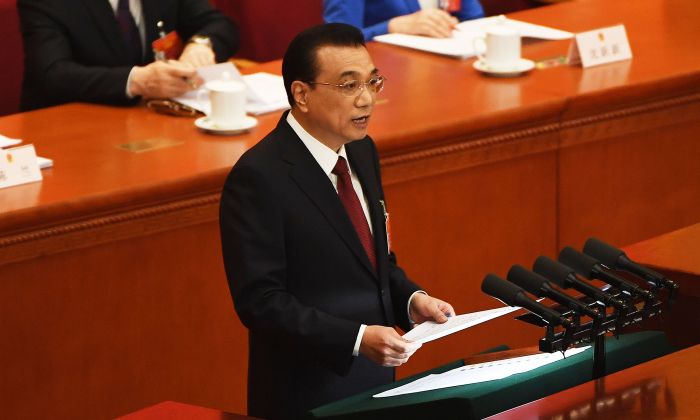 When China’s rubber-stamp legislature convened in Beijing this week, Chinese Premier Li Keqiang announced that the Chinese regime would reduce taxes as part of stimulus measures to boost the slowing economy.

Li said on March 5 that there would be planned cuts of almost 2 trillion yuan ($298.3 billion) in taxes and fees for companies.

But experts told The Epoch Times that based on the Chinese regime’s previous behavior, it is more likely that the authorities would not reduce taxes fully and could be expected to add some new taxes.

Li said value-added taxes (VAT), a consumption tax placed on products whenever value is added at each stage of the supply chain, would be lowered.

“The tax in China only can be increased, not decreased,” said Xia Yeliang, a U.S.-based Chinese economist and former professor of economics at Peking University, in an interview with the Chinese-language Epoch Times on March 6.

Xia said that although the VAT was reduced in 2018, new types of taxes and charges were created. For example, in the bustling southern city of Shenzhen in Guangdong Province, the municipal government added 53 types of miscellaneous fees, including a “road occupying fee” for any business that uses roads for more than 30 minutes, and a “road digging and repairing fee” for any construction work that involves digging.

Xia said the regime is unable to cut or control government expenditures, so the only way to make up the deficit is to increase taxes.

Since the end of the 1980s, Chinese local governments started to issue municipal bonds to collect money for local infrastructure construction. The local governments often forced local companies to buy the bonds with very low interest—or some with no interest.

But local authorities, laden with debt, have not been able to pay them back.

China Securities Journal, a publication under the state-run media Xinhua, reported on Jan. 23 that by the end of 2018, China’s municipal bonds had reached 18.39 trillion yuan ($2.74 trillion).

State-run Securities Daily reported on March 5 that China’s local governments will issue 1.5 trillion to 2 trillion yuan ($224 billion to $298 billion) of municipal bonds in 2019.

Premier Li promised on March 5 that local governments will pay off half of the matured bonds by the end of the year, but company executives were not optimistic.

“Every year, the central government promises to return the debts, but every year the local government says they do not have money,” Zhong Lan, a business owner from the eastern coastal city of Qingdao in Shandong Province, told The Epoch Times on March 6.

“[Li’s promise] is only a blurred political statement,” Frank Xie, a business professor at the University of South Carolina Aiken, told The Epoch Times on March 6.

“It risks the stability [of the Party’s rule],” Xie said. “So the Chinese Communist regime won’t really reduce taxes and charges.”