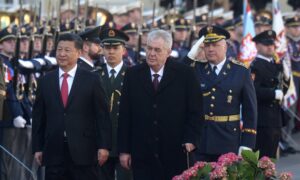 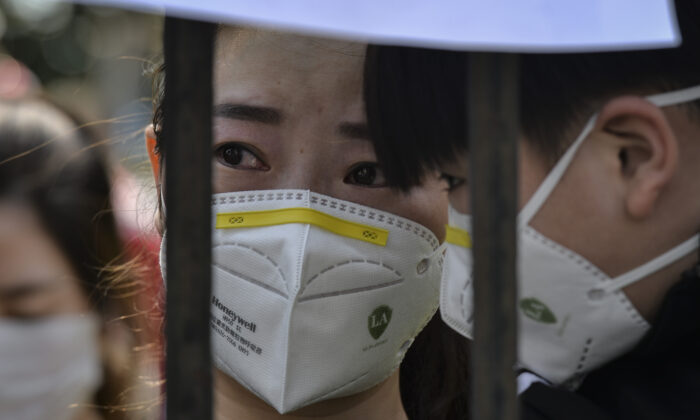 A Wuhan resident reacts as a medical assistance team from Yunnan province depart after helping with the COVID-19 coronavirus recovery effort in Wuhan, China, on March 18, 2020. (AFP via Getty Images)
Australia

An Australian regional city councillor has accused a local government in China of helping Beijing avoid international scrutiny for the COVID-19 outbreak after its officials asked his city for help purchasing personal protective equipment (PPE) to send to China in January.

Speaking at the Wagga Wagga extraordinary council meeting (pdf) in regional Australia on April 22, councillor Paul Funnell said the “Chinese Communist Party (CCP) bypassed the proper channels and tried to get a local government to help out on the quiet” when it sought help to purchase face masks and related items from Australia.

“This is because [the CCP] did not want to alert our federal government to the gravity of the [CCP virus, commonly known as the novel coronavirus],” Funnell said. “They never warned us of the real threat of COVID-19.”

The meeting was called after pushback from councillors on a motion by Funnell to cut Wagga Wagga’s ties with its sister city, Kunming in China.

That motion—passed on April 14 when the mayor was absent from voting due to illness—was overturned 6-1 in the meeting after two councillors changed their minds and two councillors abstained from the vote, citing a conflict of interest.

The sister city relationship with Kunming in China’s Yunnan province, with a population of 7.2 million, formally started in 1988. The relationship aims to promote cross-cultural, educational, and commercial exchanges between both cities.

However, according to Charles Sturt ethics professor Clive Hamilton, there are concerns that the CCP used the relationships to export its “political and strategic goals.”

“Behind the sister city banner, the CPAFFC advances the Chinese Communist Party’s political and strategic goals.” Op ed in today’s Telegraph by Mareike Ohlberg and me on Wagga and CCP weaponisation of sister cities. pic.twitter.com/gfQSBhuk86

Wagga Wagga Mayor Greg Conkey told The Epoch Times on April 22 that he supported the sister relationship with Kunming because to him, it is a “people-to-people” relationship that has “nothing to do with politics” or the “central government” of China.

In communist China, all levels of government are overseen by the CCP.

Australian Councillor Vanessa Keenan said at the meeting that Kunming’s call for help was actually “a request for assistance to purchase.” She said that, in her view, Funnell had mischaracterised the request as a “government by stealth trying to get our PPE gear,” which contributed to the successful motion that she voted to rescind.

Another Chinese city, Shenyang, was reported to have successfully received PPE donations from one of its international sister cities “at the very beginning of the pandemic,” according to the Belfast Telegraph. The donations came from a local Chinese Welfare Association in the Northern Irish capital.

Correspondence With Kunming Not Tabled In Committee Minutes

The purchase request to Wagga Wagga was made by Kunming officials on Jan. 29 in response to the CCP virus outbreak.

Conkey told The Epoch Times in an emailed statement on April 23 that Kunming Municipality had sent letters to all of its sister cities, including Wagga Wagga, requesting assistance with purchasing PPE.

Funnell told The Epoch Times on April 18 that he had to request the council’s Sister City Community Committee release “any and all correspondence” with Kunming officials, as no documents regarding the plea for PPE were tabled in the committee’s minutes.

In total, Funnell obtained three documents dated Jan. 29, Feb. 8, March 9. He received the first two documents on April 10 and the final one on April 16.

In the letter dated Jan. 29, the foreign affairs office of Kunming Municipality said: “We hope to get help from your city to purchase medical masks (N95) and medical protective clothing or to provide a way for us to purchase them, so that we can quickly add to the medical treatment and prevention of pneumonia.”

On Feb. 8, the Mayor of Kunming Municipality sent another letter to Wagga Wagga City Council to say that he had “received a positive response” from his counterpart. Kunming’s mayor then invited a delegation to visit his city after “China’s victory over the epidemic” and show “a healthy, prosperous, and vibrant Kunming.”

The March 9 document then showed Conkey replying to say that after “the request for PPE was referred to the appropriate levels of government,” Wagga Wagga City was “unable to assist” with the request due to PPE shortages in Australia.

But Funnell said that a Feb. 8 letter made him question whether Wagga Wagga representatives had responded before March 9.

“Someone’s not being open and transparent,” he said. “We had a direct request, and we said nothing.”

When The Epoch Times asked to clarify if there had been any communications with Kunming before March 8, Conkey said that a general acknowledgment email had been sent to Kunming on Jan. 30 in response to the first letter.

Conkey shared the contents of the email, although the original has not been viewed by The Epoch Times:

“Thank you for your letter of request for assistance from Wagga Wagga City Council. We will make immediate enquiries on your behalf of how we are able to assist in Australia as a means for you to purchase the suggested supplies. Once I have further information available to me I will email you with the relevant details.”

Conkey refuted Funnell’s accusation, saying that he took offence at any suggestion “correspondence was kept secret.”

“The correspondence was immediately provided upon request and it was also verbally discussed with members of council’s Sister City Community Committee in February,” he told The Epoch Times.

Funnell told The Epoch Times that there’s nothing wrong with Kunming asking for help with purchasing PPE. However, he said that the Kunming Municipality should have approached Canberra, not Wagga Wagga.

“It shows that they’re not truly in connection with what we do. We were amidst the bushfires. There was no: ‘Hello, how are you? How are you coping?’” Funnell said.

He added on Facebook that in his eyes, the Kunming Municipal People’s Government was not “the good people of Kunming.”

According to internal documents obtained by The Epoch Times, Chinese officials worked to cover-up the true nature of the CCP virus for months before it spread around the world, becoming a pandemic.