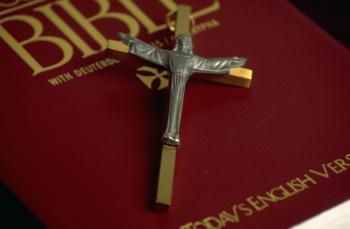 Chinese airport security seized over 300 Bibles from four visiting American Christians on Sunday. The missionaries were intending to distribute the Bibles in the southwestern Chinese city of Kunming. (Photo.com)
China

The American missionaries, intending to distribute the Bibles when they landed in the southwestern Chinese city of Kunming, were thwarted by customs’ search of their checked baggage, reported the Netherlands newspaper,Algemeen Dagblad.

For 20 years the Vision Beyond Borders group from Sheridan, Wyoming, U.S., have distributed 20,000 Bibles in China without problems, as part of their mission to "strengthen the persecuted church," according to The Washington Times.

"I've heard that there's freedom of religion in China, so why is there a problem for us to bring in Bibles?" group leader, Pat Klein, told the AP in a telephone interview at the airport.

"We had over 300 copies and customs took all of them from us."

A customs officer, quoting the Chinese Communist Party (CCP) line that the authorities were just "taking care" of the Chinese language books, denied that the Bibles had been confiscated. She told Klein that it was illegal to import the religious texts without prior permission.

The Christians were only allowed to carry one Bible each.

"We didn't come to cause trouble, we just came to bring Bibles to help out the Chinese Christians," said Klein.

This latest incident highlights the CCP’s growing number of restrictions imposed on religious believers in China.

Although the Chinese Constitution claims that it allows freedom of religion, in practice believers have to officially register with the authorities.

There are 15 million registered Protestants and 5 million Catholics in China, according to the Chinese regime. Millions of unregistered Christians in “underground” churches, however, face persecution.

Hosting the Olympic Games has given the regime an excuse to increase the arrests and detention of religious believers in the name of “safety of the Olympics.”

Hua Huiqi, leader of the unofficial Protestant church in Beijing, was arrested on Aug. 10 as he was going to a church service attended by President Bush in Beijing. He later escaped from police custody.

This year more than 8,000 adherents of the Falun Gong spiritual practice have been arrested, the number of arrests increasing as the Olympic Games approached. In Beijing alone, hundreds have been arrested and dozens sentenced to labor camps without trial, according to the Falun Dafa Information Centre.