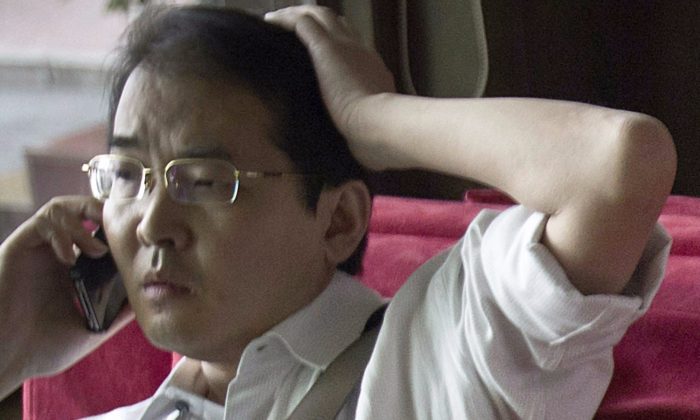 BEIJING—A Chinese lawyer who defended activists and others involved in politically sensitive cases was sentenced to 12 years in prison recently on fraud charges, his lawyers said.

Xia Lin was sentenced on Sept. 22 by the Beijing No. 2 Intermediate Court, nearly two years after being detained, lawyer Ding Xikui said.

“We’ve been striving to defend his innocence,” Ding said. “Even one day in prison is too much.”

There was no immediate comment from the court. Ding said Xia planned to file an appeal.

Xia’s sentence appeared to be the heaviest for a critic of the Chinese regime since economist and Uyghur minority rights advocate Ilham Tohti was sentenced in 2014 to life imprisonment on separatism charges after he made calls for Chinese-Uyghur reconciliation and greater economic justice.

It came amid a string of recent cases and subversion trials demonstrating the Communist Party’s determination to silence independent human rights activists and government critics. But the most those accused received was 7 ½ years.

By comparison, Nobel Peace Prize winner Liu Xiaobo, identified by the party as an existential threat to its rule, is serving an 11-year sentence for subversion.

“The harsh sentence against Xia Lin sends the sternest warning yet to the community of human rights lawyers that they must toe the Party line,” said Maya Wang, a Hong Kong-based researcher with Human Rights Watch.

Wang said Party leader Xi Jinping has made clear that, despite its calls for strengthened rule of law, the Party intends to use the legal system to enforce its uncontested rule. “Anyone who challenges this aspiration will not be tolerated.”

Ding and advocacy group Network of Chinese Human Rights Defenders said the charges against Xia, who was born in 1970, related to money he borrowed from friends, who asserted they loaned it freely and had not brought legal complaints against him. He was accused of defaulting on that debt, but no convincing evidence was provided, they said.

“He had indeed borrowed money from people, but it is just normal borrowing and lending money,” Ding said.

The Network of Chinese Human Rights Defenders said Xia was detained on Nov. 8, 2014, as he began preparing to defend Guo Yushan, the head of a Chinese think tank, the Transition Institute. It said Guo had been detained a month earlier for supporting the Occupy Central pro-democracy movement in the semi-autonomous Chinese region of Hong Kong.

The group said that, lacking evidence of fraud, investigators instead focused on Xia’s association with regime critics, including artist and human rights activist Ai Weiwei, whose design company, Beijing Fake Cultural Development Ltd., he helped defend from a demand for $1.85 million in back taxes and fines brought in 2011 that was widely seen as a further form of government harassment following Ai’s illegal detention earlier that year. Ai ultimately lost the case, despite claims of widespread legal irregularities.

“The numerous legal violations, not least the length of time it took to bring Xia to trial, demonstrate the flimsiness of the authorities’ case. Xia Lin should be freed on Thursday and compensated for his time in detention,” human rights researcher Frances Eve said in a statement.

Xia’s case “falls within China’s internal affairs … and will be handled in accordance with law,” Lu said.

In the summer of 2015, about 300 activists and human rights lawyers were initially seized in a roundup and questioned before most were released.

But more than a dozen of those detained last year remain in custody, their legal fates still unknown.