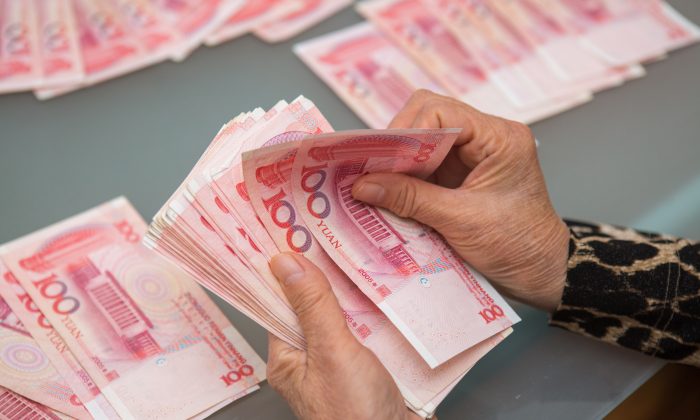 BEIJING—China’s yuan sank to a 10-year low against the dollar on Oct. 29, coming close to breaking the politically sensitive level of seven to the U.S. currency.

The yuan declined to 6.9644 per dollar at midday, passing its most recent low in 2016 before recovering slightly. It was the lowest level since May 2008.

The currency’s weakness is one of a series of elements fueling Washington’s trade complaints against Beijing. The U.S. Treasury Department declined this month to label China a currency manipulator but said it was closely watching Beijing.

Chinese authorities have said they want to avoid “competitive devaluation” to boost exports amid a tariff war with the United States. But they are trying to make the state-controlled exchange rate more responsive to market forces, which are pushing the yuan lower.

The level of seven yuan to the dollar has no economic significance, but could revive U.S. attention to the exchange rate.

Chinese authorities are likely to “stand their ground” and prevent a “capitulation beyond the 7 level,” Mizuho Bank said in a report Monday.

The yuan, also known as the renminbi, or “people’s money,” has declined by almost 10 percent against the dollar since April as China’s economy cooled and U.S. and Chinese interest rates went in opposite directions.

That helps exporters cope with tariffs of up to 25 percent imposed by U.S. President Donald Trump on billions of dollars of Chinese goods. But it raises concerns over Beijing’s trade tactics.

“The last thing they will do is to escalate the tension by starting a currency war amid a trade war,” Macquarie Group said in a report last week.

China had been by far the largest currency manipulator in the past. The country amassed $4 trillion of reserves, growing its current account surplus to 10 percent of its gross domestic product (GDP) between 2003 and 2013. China sharply cut back on manipulation in the last five years.

A Treasury report on Oct. 17 said China failed to meet criteria to be labeled a currency manipulator, a status that can trigger sanctions. But it said Beijing was, along with Japan and Germany, on a list of governments whose currency polices would be closely monitored.

A weaker yuan also might encourage an outflow of capital from the world’s second-largest economy. That would raise borrowing costs at a time when its leaders are trying to shore up cooling growth.

The People’s Bank of China has been trying to make its exchange rate mechanism more efficient by increasing the role of market forces.

The exchange rate is set each morning and allowed to fluctuate by 2 percent against the dollar during the day. The central bank can buy or sell currency—or order Chinese commercial banks to do so—to dampen price movements.

Some forecasters say Beijing’s stance might change if Trump and his Chinese counterpart, Xi Jinping, make no progress at a possible meeting during a November gathering of the Group of 20 major economies.

The central bank tried to discourage speculation by imposing a requirement in August that traders post deposits for contracts to buy or sell yuan. That allows trading to continue but raises the cost.

Beijing imposed similar controls in October 2015 after a change in the exchange rate mechanism prompted markets to bet the yuan would fall. The currency temporarily steadied but fell the following year.

By Joe McDonald. The Epoch Times contributed to this report.