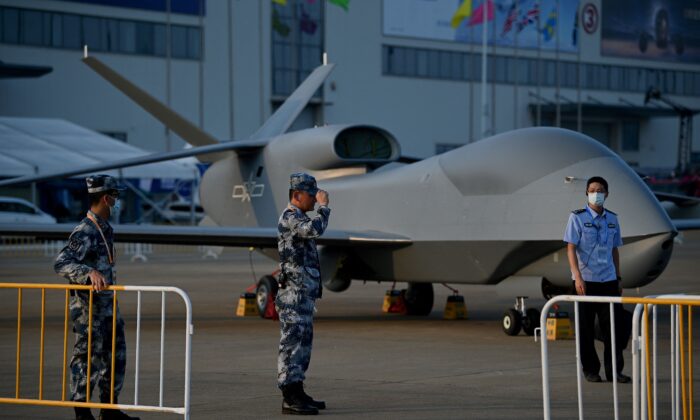 China’s War Machine Is Betting the Future on Drones

A swarm of drones flies through the night sky over the Pacific.

Shrouded in darkness and less than 100 miles from the California coastline, they move in groups of four and six, stalking U.S. Navy vessels. They whir about over the ships’ bows, gathering intelligence to deliver to faceless masters.

They match the speed of the naval vessels, flying unimpeded in low visibility for as long as four hours at a time. The alarmed crews of the ships have no idea where they came from or what their purpose is.

This isn’t the plot of an up-and-coming spy thriller, but a series of actual events that took place in July 2019.

The chilling encounters raised alarms throughout the Navy and brought forth an investigative apparatus composed of elements of the U.S. Navy, Coast Guard, and FBI. Members of the Joint Chiefs of Staff and the commander of the Pacific Fleet were kept primed with updates on the situation.

“If the drones were not operated by the American military, these incidents represent a highly significant security breach,” reads one investigative report based on the ships’ logs.

Yet the nature of the drones, where they came from, and who deployed them remained a mystery for more than two years.

However, a new investigative report published in June by The Drive shed light on the incidents, which totaled at least eight encounters involving several unmanned aerial vehicles (UAVs) that were previously simply referred to as UFOs in the press.

The report, based on Navy materials newly obtained through multiple Freedom of Information Act requests, pinpoints the launching point of the drones as a civilian bulk carrier operating in the area at the time. That ship, the MV Bass Strait, is owned and operated by Pacific Basin, flagged out of Hong Kong.

“The Navy assessed that the commercial cargo ship was likely conducting surveillance on Navy vessels using drones,” the report reads.

During its first-ever operational voyage, the ship may have been linked to previously unknown incidents in March and April 2019, including “intelligence collection operations” targeting the USS Zumwalt, America’s most advanced surface combatant.

“Active surveillance of key naval assets is being conducted in areas where they train and employ their most sensitive systems, often within close proximity to American shores,” the report reads.

It’s too early to say what connection the crew of the Bass Strait, Pacific Basin, and the Chinese Communist Party (CCP) share. Nevertheless, the incident underscores the central role that drones are to play in the next stage of modern warfare and how they’re already shaping the battlefield and intelligence gathering processes.

As it so happens, the CCP is betting big on drone warfare. The regime has invested heavily for more than a decade into everything from cheap and expendable commercial quadcopters to resource-heavy high-altitude long-endurance drones.

Likely built from data obtained from the Iranian capture of an advanced U.S. drone in 2011, China’s “Sharp Sword” was just the first of many advanced UAVs, built through the assistance of foreign technologies gathered as part of the regime’s comprehensive program of technology theft.

Since then, the CCP has funded dozens of varieties of UAVs using a plethora of state-owned corporations that also build the regime’s space and missile technologies. From larger combat drones, such as the Sharp Sword, to small quadcopter drones, such as those spotted near California, to rocket-powered supersonic vehicles intended to zip through the sky gathering targeting information, the CCP buys everything drone-related.

The CCP is also already building out its drone capabilities across the spectrum of its military assets, deploying those capabilities in some of the world’s most contested regions.

China’s third and newest aircraft carrier, the Fujian, is expected to host a variety of drones. Its electromagnetic catapult system will prove invaluable for quickly launching differently weighted drones with adjustable torque.

That effort will likely build on operational lessons learned from the past several years, as China’s second aircraft carrier, the Shandong, was spotted in early June with a small fleet of “commercial or commercial-derivative drones” on its flight deck, according to one report’s analysis of images that appeared on Chinese social media platform Weibo.

“[The images] do underscore the Chinese People’s Liberation Army’s ever-increasing efforts to develop and field various types of unmanned aircraft, including those that can operate together in networked swarms, and often with an eye toward performing various roles in the maritime domain,” one report reads.

If that weren’t enough to underscore the regime’s ambition to dominate the strategic space with a new, drone-first approach to military engagement, there’s now the case of the Zhu Hai Yun.

The Zhu Hai Yun is a 290-foot ocean research vessel designed to deploy various underwater and airborne drones for various purposes. The ship is also a drone and can either be remotely controlled by a pilot or left to navigate the open seas autonomously.

In the words of its manufacturer, it’s the “world’s first intelligent unmanned system mother ship.”

Although Beijing has officially described that mothership as a maritime research tool, a South China Morning Post report stated that the vessel indeed hosts military capabilities that can “intercept, besiege, and expel invasive targets.”

That news is likely to displease U.S. military leadership, which isn’t likely to deploy its own such vessel for six more years.

As the pace of China’s military drone development has accelerated, the rate of international incidents related to drones has also increased.

In August 2021, Japan Self-Defense Forces led multiple sorties of fighter jets over several days to intercept PLA drones caught flying south of Okinawa, Japan. The drones, comparable in size to U.S. Predator and Reaper drones, were believed to be collecting strategic intelligence on the Miyako Strait, which provides the PLA with a critical point of entry to the Pacific and has been the site of increasing Chinese military excursions for the past decade.

The incident serves as a poignant reminder of what so much of China’s drone fleet serves to do: secure vital strategic intelligence for the coordination of military actions.

It’s this point that brings one back to the issue of just what several groups of drones launched from a Hong Kong freight ship were doing spying on U.S. Navy vessels near the coast of California. If such actions were directly or indirectly tied to the sprawling military-security apparatus of China’s communist government, what would be the end goal for the intelligence gathered? What’s the action in “actionable intelligence”?

To that question, one analysis found that 2019’s “adversary drones” were “meant to stimulate America’s most capable air defense systems and collect extremely high-quality electronic intelligence data on them.”

“By gathering comprehensive electronic intelligence information on these systems, countermeasures and electronic warfare tactics can be developed to disrupt or defeat them,” the report reads. “Capabilities can also be accurately estimated and even cloned, and tactics can be recorded and exploited.

“That swarm could have been, and likely was, sucking up, or helping another nearby platform suck up, all that sensitive … data on the most capable warships on earth and at very close range.”

In essence, the drones were achieving two things. The first was the blanket intelligence gathered from spying on U.S. Navy vessels up close. The second was learning what would draw a U.S. response and what that response would be.

In this way, the drones were baiting U.S. naval vessels, soaking up intelligence about their response (or lack thereof) for future actions that could not only inform the Chinese military about the technical specifications of the U.S. ships, but also how to manipulate their crews and protocols to learn how U.S. forces would behave in conflict.

Winning the Next War

Such tools have very real consequences for the United States, its allies and partners, and the greater liberal international order. Perhaps nowhere is this more true than in the acute threat of a CCP invasion of democratic Taiwan, which has maintained its de facto independence since 1949.

Despite that independence—and despite the fact that the CCP has never ruled the island—the regime has made the forced unification of Taiwan with the mainland a central point of its current focus. Drones are to play a central role in that endeavor, it appears.

In late 2021, the PLA launched a miniature aircraft carrier designed to deploy and recover swarms of drones. Such staging vehicles are designed to work alongside surface combatants to disrupt military operations in the maritime domain by swarming enemy targets or rendering them less effective through distraction.

One examination of China’s drone capabilities by The Drive found that “drone swarms of various kinds are only more and more likely to be a component of future conflicts that China might find itself involved in, whether these being operated by Chinese forces or other parties.”

Such drone technologies would offer “decisive advantages … in scenarios revolving around the defense of Taiwan against a Chinese invasion,” according to the report.

As such, it shouldn’t be thought of as surprising that the regime would focus so much strategic thought on a myriad of drone types for military use.

Indeed, according to the results of a wargame conducted by the U.S. Air Force, China would likely deploy hundreds if not thousands of drones in autonomous swarms during an invasion of Taiwan. Designed to collaborate with other drones in the network, such swarms offer both resiliency and an offensive capability unmatched by many of China’s more conventional arms.

This is particularly true when it comes to China’s strategic ambition to drive the United States out of the Indo-Pacific and away from defending Taiwan.

All isn’t without hope for Taiwan and the United States, however. Indeed, after years of wargames demonstrating resounding U.S. losses over a hypothetical defense of Taiwan, the United States scored a sure, albeit pyrrhic, victory in its most recent wargame in 2021.

What would be the key to victory in repelling a CCP invasion of Taiwan? Drone swarms of its own.

As one summary reads, “Swarming capabilities are seen even by top U.S. think tanks and the Pentagon as being so critical to future conflicts that they could be decisive in a major peer-state battle, such as one over Taiwan.”

What must be at the forefront of the minds of strategists everywhere is the fact that the U.S. Air Force fought its hypothetical war with China with a notional force. That is, one that had drone technologies that the United States hasn’t actually deployed yet.