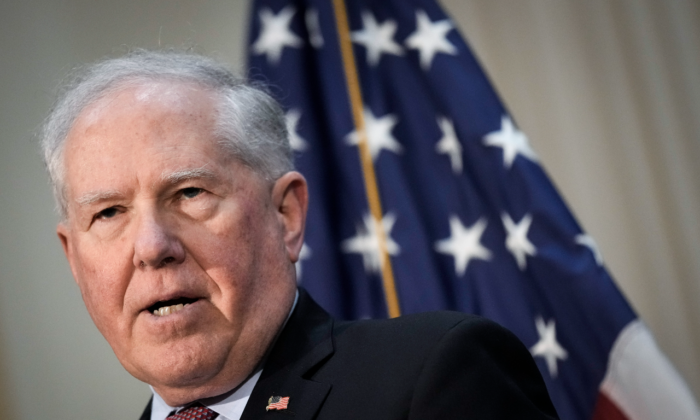 The Chinese Communist Party (CCP) seeks to displace the United States as the world’s premier power, and is building the military required to pursue that goal, according to the secretary of the Air Force and Space Force.

“To do that, they basically have to displace the United States.”

Kendall made the remarks during a May 2 talk on the future of American air and space power with the Brookings Institution, a Washington-based think tank. During the talk, Kendall clarified that, while Russia was currently diverting international resources and attention, the CCP remained the key threat to the United States across every domain.

“I’m much more concerned about China than about Russia,” Kendall said.

Kendall explained that the Chinese military was rapidly expanding and modernizing its forces with the explicit purpose of ejecting the United States from the Western Pacific and gaining both regional hegemony and the ability to pursue global influence operations.

“It was quite clear that [China’s] desire was to deny us the ability to project power in the Western Pacific,” Kendall said of Chinese military development.

“They’re not waiting to see what we do.”

He said that the CCP was focusing resources on developing “transformational capabilities” and new rocket forces that would grant it the power to push the United States out of the region and allow it to effectively deter interference with its plans to conquer Taiwan, which it claims is a breakaway province of China.

To that end, Kendall said that the United States should believe the words of CCP leader Xi Jinping when he said that he sought to unite Taiwan with the mainland and would not rule out the use of force.

“I made the mistake a few times during the Cold War of not believing what the Soviets were saying,” Kendall said. “Turns out they meant what they were saying. I think the same can be assumed of the Chinese right now.”

“I don’t think that they’re interested in grand territorial expansion, but they are interested in having as much influence as possible so that they can set the rules for the economy,” Kendall added.

Kendall also spoke on the issue at a May 3 hearing of the House Armed Services Committee on the posture of the Air Force and Space Force, where he said that China was explicitly studying the American way of war and investing in systems capable of undermining it.

“They are studying how we fight …  and designing systems that are intended to defeat us,” Kendall said.

To that end, Kendall also presented a joint statement (PDF) to the Committee with Space Force Gen. John Raymond and Air Force Gen. Charles Brown, which underscored the importance of centering American strategy on combating China.

“…Tgreatest challenge to the Department of the Air Force’s ability to perform its missions is the People’s Republic of China’s (PRC) long-standing and extensive military modernization program,” the statement said, using the official name for communist China.

“In addition to developing the ability to attack in space, the PRC has integrated space capabilities into its military operations in order to target maritime, air, and land forces and project power through space. The PRC’s 2021 test of an orbital hypersonic glide vehicle constitutes a new challenge to strategic deterrence and stability.”

Kendall said that he was focused therefore on developing resiliency among U.S. systems, as the American military relied heavily on small numbers of high value assets. As such, he said that the Department of the Air Force would double its research and development spending, with a particular focus on forging more resilient space systems and increasing force survivability in preparation for a potential conflict with China