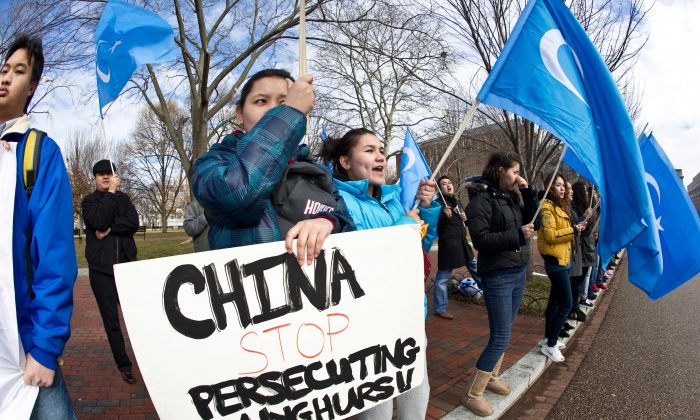 Uyghur activists protest against the visit of Chinese regime head Hu Jintao outside of the White House in Washington, DC, on Jan. 19, 2011. A new report says that Uyghurs across the world, including many in the United States, are being spied on by China’s intelligence services. (Nicholas Kamm/AFP/Getty Images)
China-US News

China’s Uyghurs Who Escaped Abroad Are Being Targeted by Chinese Spies, Report Says

A report says that Uyghurs, the Muslim ethnic people in China’s Xinjiang region that has been among China’s most heavily persecuted minority groups, are being spied upon by Chinese regime’s intelligence services even after they’ve escaped China and sought asylum overseas. The report comes at a time when the United States and other nations are growing increasingly alerted to the Chinese regime’s efforts to extend its authoritarian control and influence across the world.

The Chinese regime has been rapidly increasing its persecution of the Uyghurs in Xinjiang in recent years, according to various human rights watchers and reports, such as the U.S. State Department’s International Religious Freedom Report published last year.

What has not been often discussed, however, is the fact that Chinese regime has also made use of its extensive intelligence network deployed across the world to spy upon and further persecute Uyghurs who’ve already escaped overseas.

“Espionage against the Uyghur community overseas is a priority for the Chinese security services,” according to a report published by the U.S.-based organization Uyghur Human Rights Project (UHRP). “There have been significant cases of espionage against the Uyghur community in Europe, but communities in North America and Australia are also subjected to Chinese attempts to recruit them as informers.”

The report, titled “The Fifth Poison: the Harassment of Uyghurs Overseas,” was originally published in November 2017 and was presented on Feb. 26 at an event discussing Uyghurs human rights issues that was held at the Cannon House Office Building at the U.S. Congress.

Nicole Morgret, project coordinator of the UHRP who introduced the report, said that the Ministry of State Security, the Chinese regime’s spy agencies, and in some cases its Ministry of Foreign Affairs, have been documented as conducting activities against the exiled Uyghurs across various parts of the world ranging from Egypt and Turkey to Western countries like Germany, Sweden, Canada, and Australia.

“The Chinese government’s effort to spy on dissidents should not be dismissed as irrelevant to national security,” the report says. “This kind of monitoring is intended not only to gather information on Uyghurs and other dissident groups, but also to intimidate them into not exercising their rights to assembly and speech even in Western countries.”

According to Morgret, the Chinese regime’s spying on the Uyghurs in the United States has been more under the table compared to its efforts in other countries. However, there were still documented cases of Chinese intelligence officials making remote threats against Uyghurs on U.S. soil, notably in May 2017 when Uyghur students across many countries including the United States received “orders” to go back to China under the threats that their parents and siblings would be persecuted if they refused to comply.

“The harassment of Uyghurs overseas is a longstanding tactic of the Chinese government to attempt to discourage any political activity among them and to monitor those who are or may be inclined to become politically active,” the report says.

During a congressional hearing earlier in February, FBI Director Christopher Wray said that the Chinese regime manipulated nontraditional spies in academia, such as professors, scientists, and students to collect intelligence. While Wray did not specify whether such intelligence included the spying of Chinese dissidents like the Uyghurs, he stressed that the regime’s efforts stretched “across basically every discipline.”

Radio Free Asia recently reported that a Uyghur student studying in Virginia was confronted by Han Chinese classmates who threatened to report him to the Chinese embassy for voicing “separatist” views. The teacher, in this case, backed the Uyghur student and encouraged him to report such abuse to the U.S. authorities, such as the FBI, at which point the Chinese students quickly backed down.