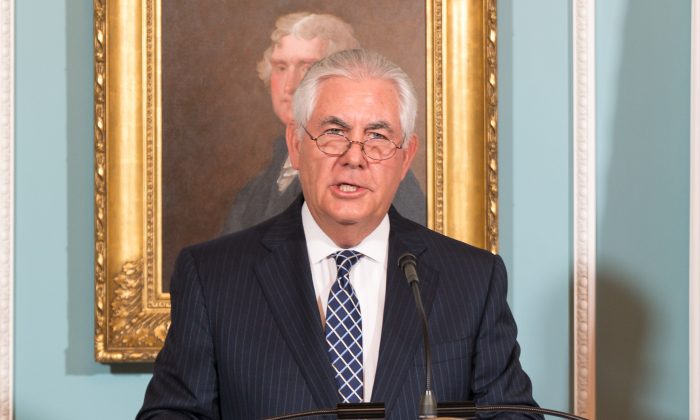 WASHINGTON—Secretary of State Rex Tillerson released the 2016 International Religious Freedom Report on Aug. 15 at the State Department. Tillerson used his remarks “to call out a few of the more egregious and troubling examples,” which included actions by the ISIS terrorist group, China, and Iran, among others.

Tillerson blasted ISIS for “genocide against Yazidis, Christians, and Shia Muslims in areas it controlled.” He said that the extremist group continues to target religious and ethnic groups for “rape, kidnapping, enslavement, and even death.”

In China, the regime has tortured and detained thousands who practice their religious beliefs, according to Tillerson, who pointed out that “dozens of Falun Gong members have died in detention” since last year. These are the latest deaths in 18 years of persecution. In 1999, then-Communist Party leader Jiang Zemin, fearing the popularity of the spiritual practice of Falun Gong, launched a campaign to eradicate it.

The report’s section on China documents numerous abuses of religious freedom in China. It calls attention to the situation of human rights lawyer Gao Zhisheng, who defended religious groups including Christians and Falun Gong practitioners. Following six years of harassment, Gao was imprisoned for five years and subjected to extensive torture. Since Gao’s release in 2014, the Chinese regime has continued to subject him to intrusive surveillance and house arrest. Gao disappeared from his home on Aug. 13, according to family members.

In Iran, Tillerson said 20 individuals were executed “on charges that included ‘waging war against God,'” adding that “Baha’is, Christians, and other minorities are persecuted for their faith.”

The U.S. State Department began releasing the annual report in 1998 in accordance with the International Religious Freedom Act—legislation, Tillerson said, “that upholds religious freedom as a core American value under the Constitution’s First Amendment, as well as a universal human right.”

The report this year identified 10 “countries of particular concern”: Burma, China, Eritrea, Iran, North Korea, Saudi Arabia, Sudan, Tajikistan, Turkmenistan, and Uzbekistan, all of which were also listed in last year’s report, following the recommendations by the U.S. Commission on International Religious Freedom.

Tillerson said that the administration is looking forward to working with Kansas Gov. Sam Brownback, who has recently been nominated by President Donald Trump to be the U.S. ambassador-at-large for international religious freedom. If confirmed, Brownback will be the highest-ranking U.S. official to ever head the commission, said Tillerson.