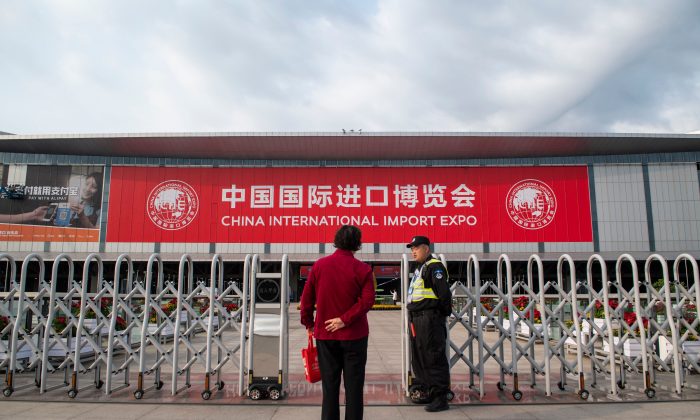 A security guard stands in front of the entrance of the National Exhibition and Convention Center (Shanghai), the main venue to hold the upcoming first China International Import Expo (CIIE), is seen in Shanghai on October 31, 2018. (JOHANNES EISELE/AFP/Getty Images)
China

Senior officials from United States, South Korea, and Australia among those expected to skip the event.
By Nicole Hao

The Chinese state-run media has been busy promoting the inaugural China International Import Expo, involving 150 countries and featuring a speech by leader Xi Jinping at the opening ceremony.

Closer scrutiny, however, suggests that the gathering won’t have the intended effect of boosting China’s image as a major importer, as senior officials from the United States and other G7 nations, as well as South Korea and Australia, are expected to skip the event.

The first China International Import Expo (CIIE) will be held from Nov. 5 to Nov. 10 in Shanghai, according to state reports. On the evening of Nov. 4, Xi and his wife, Peng Liyuan, will host a banquet for the attending foreign leaders and senior officials.

Politicians and business executives are planning to attend, including officials from the Czech Republic, Dominica, Kenya, and other countries, Lu Kang, spokesman of China’s Ministry of Foreign Affairs, said.

Seoul had planned to send Minister of Trade, Industry, and Energy Park Un-gyu, but after a conference between Park and Zhong Shan, China’s Minister of Commerce, couldn’t be arranged, South Korea decided to send a lower-level official, South Korea’s JoongAng Ilbo reported Oct. 30.

On Oct. 24, the U.S. Embassy in China announced that the United States wouldn’t have any senior government officials in attendance, while encouraging China to “level the playing field for US goods and services.”

The Trump administration has imposed tariffs on hundreds of billions of dollars’ worth of Chinese goods, due to longstanding trade imbalances, Chinese theft of intellectual property, and Beijing’s own protectionism.

“China needs to make the necessary reforms to end its unfair trade practices that are harming the world economy,” a U.S. Embassy spokesman said.

Xi Jinping in May 2017 announced the gathering, which commerce minister Zhong Shan described as a window to show that China has opened its markets, in support of economic globalization and trade liberalization. The CIIE, which endeavors to demonstrate China’s value as a country of purchasing, as well as production, has been touted by state media as the “Four Great Chinese Diplomatic Events” of 2018.

Despite the retaliatory tariffs, trade between China and the United States rose by 6.5 percent in the first three quarters of 2018.

On Oct. 23, the White House confirmed that President Donald Trump and Xi will have a brief meeting on the sidelines of the G20 Summit, to be held on Nov. 30 and Dec. 1 in Argentina.