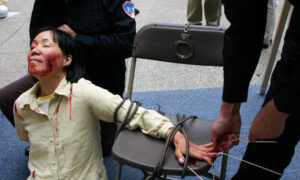 ‘I Told Myself That I Wouldn't Die’: Chinese Woman’s Resilience in the Face of Brutal Torture Over Her Faith
0
Share Now
TelegramFacebookTweetEmailTellMeWeReddit
Copy Link 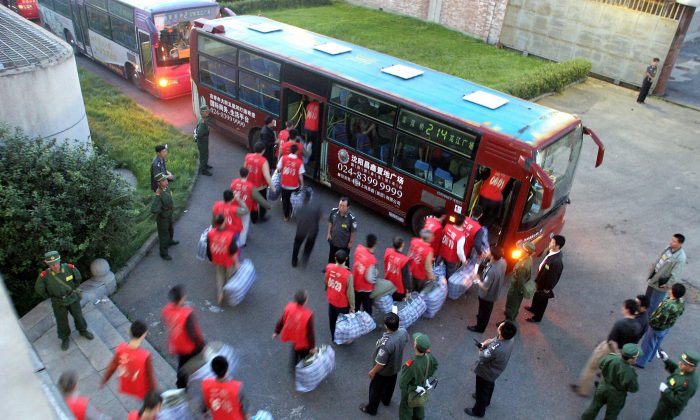 Chinese prisoners board a bus under guard as they move to a newly constructed prison in Shenyang in northeastern China's Liaoning province on Aug. 20, 2005. (AFP/AFP/Getty Images)
China Human Rights

Dozens of prisoners in China die every year because of the prison authorities’ corrupt system and their penchant for enslaving and torturing those in their care.

Wang Yuyin (a pseudonym for safety) was a political prisoner in Shenyang First Prison, Liaoning, a coastal province of northern China.

He told The Epoch Times on Aug. 19, “The annual mortality rate of prisoners is higher than that of a rural village.” He was talking on behalf of other prisoners who want to reveal the ongoing atrocities caused by the communist regime’s corruption and brutality.

Shenyang First Prison was reorganized in 2003 to become part of Shenyang Prison City, a first-level security prison, occupying about 60.54 acres of land, and holding prisoners serving sentences of 10 to 15 years, according to Baike.Baidu.com, a Chinese communist style of wikipedia. The Prison City has a total of 20 departments, 23 prison areas, four subsidiary units, and 18 prison-run enterprises and companies.

The prisoners don’t get to see a doctor unless the prison officials are bribed, thus, any prisoner unable to pay will not receive prompt and effective medical treatment.

Wang said, “The authorities delay treatment until the person is dying. By then, they are required to take the prisoner to the hospital because inmate deaths in prisons are not allowed.”

However, if a prisoner does die inside the prison, the authorities will shoot a video fabricating their attempts to resuscitate him to show their superiors during any subsequent inspection. “The prisoners are all aware of the authorities’ malfeasance,” Wang added.

Wang revealed an appalling form of torture: freezing to death.

“In the bitter cold of winter in northeastern China, the terminally ill prisoners were stripped of their clothes, showered with cold water, and left on a wooden bed covered with a few pieces of newspaper in a cell with an open window. The prisoners soon froze to death.” Wang said.

Wang explained: Such circumstances usually happen to prisoners who are sick, bedridden, and unable to take care of themselves. They will be carried to the shower room and doused with cold water. “The prisoners will certainly not survive the dawn if the authorities want them to die in the middle of the night,” Wang added.

Cases involving use of the freezing torture were previously exposed by Minghui.org, a website offering first-hand, direct, and up-to-date reports on the Falun Gong community from across China and throughout the world.

Falun Gong, also known as Falun Dafa, is a peaceful mind and body spiritual practice, rooted in traditional Chinese culture, following the principles of truth, compassion, and tolerance, that is practiced by millions of adherents around the world.

In 1999, former Chinese regime leader Jiang Zemin initiated the persecution of Falun Gong, which resulted in thousands of deaths and the imprisonment of a massive number of Falun Gong adherents that continues to this day.

A report by Minghui.org in April 2019 exposed how former warden Wang Bin of Shenyang First Prison persecuted the prisoner to death using the freezing torture.

Wang Bin vacated the entire fifth floor of the prison hospital in 2012 and designated it as an area for the persecution of Falun Gong adherents, hoping to force 100 percent of them to renounce their faith.

According a Minghui.org report, an unknown Falun Gong adherent transferred from No. 2 Prison was stripped of his clothes, dragged to the shower room, and sprayed with water for a long time.

He was placed in an empty room, handcuffed, and left on a bed board in a cell with the window wide open in mid-winter.

The next day, he developed a high fever and he died on the third day. An informed prisoner said, “This prison is so [expletive] evil that it persecutes a healthy living person to death in three days.”

According to the report, prisoners were not given treatment when they became sick. Many of them were seriously ill but left alone. Some were too sick to get up and were dragged by other prisoners to the shower room for a cold shower in winter. When they died, the authorities faked rescues, medical records, and time of death at will. Every department cooperates tacitly with the coverup. The entire prison staff, guards, and prisoners are aware of what is happening but dare not report it to the authorities.

Wang’s description and the reports by Minghui.org corroborate each other.

Among the many inhumane things that happen in the prison, Wang mentioned how a prisoner would be held on a “tiger bench,” handcuffed, and tortured to death.

The tiger bench has been a common torture tool in the prison under the communist regime. Through this torture, prisoners either die or lose the ability to walk again.

Wang said that some prisoners who he met in the prison had served sentences of over 20 years. “The penalties have been stricter since Xi Jinping came to power,” he said, “The longest term is a reprieved death sentence, which is tantamount to a 30-year sentence.”

He said, “For example, a prisoner begins his sentence at the age of 40 and will be released at 70. However, the prisoner will serve more than 30 years if his term is not reduced. Most prisoners cannot make it through.

“Life imprisonment is currently equivalent to serving a sentence of 25 years while it was merely a 20-year imprisonment. Given the circumstances, prisoners commit suicide every year. Many prisoners hanged themselves last year.”

When an Epoch Times reporter called several numbers for the Shenyang First Prison Politics Department to inquire about the situation they heard a recording saying “the number you have reached does not exist” or were disconnected.

Wang said that Shenyang First Prison houses 3,000-plus prisoners, but makes a profit of tens of millions of dollars a year through multiple corrupt means.

According to Wang, the prison guards work for a week and take two weeks off during the pandemic. The guards would leave with a suitcase full of clothes from the factory. “There are more than 300 of us who make more than 10,000 pieces of clothing every day. The fabric belongs to the manufacturer. The guards take home as much clothing and fabric as they want,” Wang said.

Furthermore, the authorities have been cooking the books to line their pockets with arbitrary construction projects such as demolishing walls and gates every year. According to Wang, the authorities make thousands of dollars by changing prison gates that cost around hundreds at the most.

The prison guards purchase cigarettes and luxury goods for prisoners and sell them for a higher price. Wang said, “For example, they charge prisoners $15 for a $5 item.”

Wang Yuyin said that some information was deliberately leaked by prison guards, such as the arrest of the former warden Wang Bin.

He said that Wang Bin was warden of Shenyang First Prison for more than 10 years. He was later promoted to the Liaoning Provincial Prison Administrative Bureau. However, the Bureau has dismissed many officials in recent years and The Epoch Times was unable to confirm Wang Bin’s dismissal.

Wang said that all prisoners detested Wang Bin and many of them died at his hands. When Wang Bin was the warden, prisoners’ meals were prepared with rotten and unwashed food. “There was sand at the bottom of the bowls,” he said.

The Epoch Times reporter found that Wang Bin’s online information seems to be hidden. The only item in 2014 on the Bureau’s website that mentions his name shows a “page not found” error message. A message on one of Wang Bin’s cellphones said it was an empty number and the other two were not answered.

Wang said: “What I have said is my personal experience based on the facts. Prisoners often lash out at the regime and the prison authorities in private. We hope to unveil the atrocities. Prisoners can only count on those who are released from prison due to the closed environment of the prison. Even so, we dare not disclose the facts in China, or on the Internet. Given that prisons [in China] are of the same system and nature, what happens in Shenyang First Prison is a representative phenomenon.”