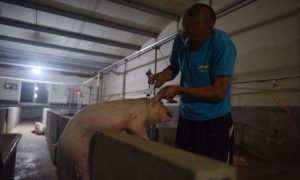 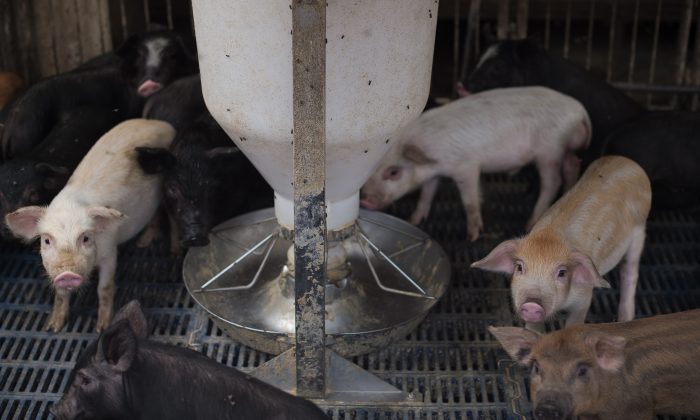 Piglets at a pig farm on the outskirts of Beijing. (NICOLAS ASFOURI/AFP/Getty Images)
China

There are about 430 million farm-raised pigs in China, according to China’s National Bureau of Statistics, accounting for more than half of all farm pigs in the world.

As the world’s largest pork producer and consumer, keeping a healthy stock of pigs is important for the Chinese regime.

YingZi Technology Inc., an internet company based in the southern Chinese city of Guangzhou, was the first to develop “pig face recognition” technology, formally released in March 2018. Based on the features of each pig’s ears, eyes, nose and other features, this technology is said to be able to uniquely identify each pig and set up an archive file for each of them.

According to He Jingxiang, the company’s CEO, the purpose of this development is to ensure food safety by tracking the source of pork products.

The technology incorporates facial recognition with big data to analyze swine behavior, according to a company statement.

Then in June, Alibaba Cloud launched “Agricultural Brain,” a new technology which uses AI-supported imaging and speech recognition technology to help farmers monitor live pigs in real time. Each pig has its own archive file, including breed, age, weight, its ability to eat (an oft-indicator of the pig’s health), exercise frequency, and more.

The developers of “Agricultural Brain” claimed that, by combining acoustic characteristics and infrared ray technology to detect temperature, this system is able to determine whether the pigs are sick. It monitors body temperature, as well as the pigs’ coughing and squeaking—as an early detection and warning of a disease outbreak.

Alas, the technology did not come soon enough. In August last year, an outbreak of African swine fever broke out in northeastern China, which has since spread to practically all regions and provinces in the country. The disease is deadly for pigs but does not affect humans.

At the JD Discovery Conference held by JD.com in November, the company announced the establishment of a subsidiary, JD Farming and Animal Husbandry, and the JD Agricultural Research Institute. Collaborating with the China Agricultural University in Beijing, JD.com—originally an e-retailer business—will build an “intelligent pig farm” in Fengning County, Hebei Province.

At this farm, parameters such as air quality, temperature, and humidity can be monitored at any time. Meanwhile, JD.com will also employ its own developed “pig facial recognition” technology, which shows each pig’s parents, its date of birth, breed, weight, growth status, and health condition.

The company claims that this technology can “achieve precise control of the feeding amount, to ensure a balanced growth for each pig, and to prevent pig bullying.”  Here, pig bullying mainly refers to when some pigs eat much more than their reasonable share while the other pigs do not have enough to eat.

Despite the newfangled technologies, agricultural experts have pointed out challenges to their enforcement. First, humans can stand still in front of an AI camera when taking a picture, but pigs would not easily do so. More importantly, human faces differ greatly from one another, while pigs look very similar in appearance.

Because they live in a dirty environment and can easily soil their faces, this could also make it difficult for the camera to identify them.

Chinese netizens were shocked and amused at this new technology. One of them suggested, “Isn’t it more convenient to attach a QR code on the pig’s ear?”

Someone also said, “Making a label for each one is the simplest and cheapest solution to identify pigs.”

In an interview with Radio Free Asia on Feb. 7, 2019, Beijing-based agricultural analyst Ma Wenfeng pointed out the root cause of China’s food safety problem is not a technical issue, but the huge gap between the rich and poor. The rich and privileged classes can enjoy high-quality food, while the poor can only choose cheap food made with questionable food safety standards. Scandals often break out when Chinese businesses are exposed for using chemicals and other additives to lower costs that are detrimental to consumers’ health. In 2013, a crime ring was exposed for processing rat meat and selling them as mutton.