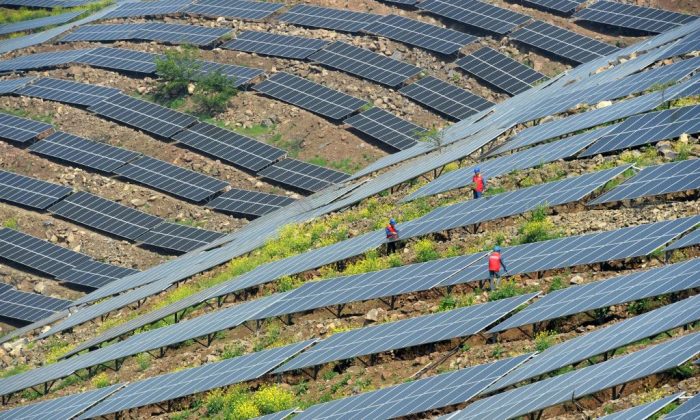 China’s Solar Industry in Trouble Despite Years of Government Support

The U.S. solar industry has been gutted by Chinese manufacturers who dump their products in the U.S. market, undermining the local industry. The decline of the once-booming industry in the United States goes hand-in-hand with the evolution of China into the world’s biggest solar panel maker.

China surpassed Germany in 2015 to become the country with the most installed solar capacity. In 2017, China’s photovoltaic (PV) market passed the 100 gigawatts (GW) milestone—enough energy to power 70 million homes.

The U.S. government has taken several steps to stymie the damage done to the U.S. solar industry. In January, the Trump administration imposed tariffs on Chinese-imported solar cells and modules—30 percent in the first year, followed by an annual incremental drop of 5 percent, reaching 15 percent by 2021.

Then, in June, Chinese-imported solar cells and modules were the target of 25 percent tariffs, part of the $50 billion worth of Chinese products to be hit with tariffs amid the trade war between China and the United States.

The United States is not the only country trying to protect its own domestic solar industry against Chinese solar products. On July 18, India, the largest importer of Chinese solar equipment, announced that it would impose a 25 percent safeguard tariff on solar modules and cells imported from China.

It remains to be seen how much the U.S. solar industry will benefit from the proposed tariffs, as U.S.-based solar cell and module manufacturers actually account for just 15 percent of solar jobs in America, according to the 2017 National Solar Jobs Census conducted by U.S. nonprofit the Solar Foundation.

Meanwhile, solar panel installation companies in both the United States and European Union, who have relied on cheap Chinese imports to expand their business, have complained that the tariffs on Chinese solar panels may cut into their profits as they are forced to raise prices for consumers who may be unwilling to pay.

However, there are already signs that China’s solar industry is not sustainable, after years of relying on heavy government subsidies.

In June, the Chinese regime made a surprise announcement that it would implement measures to cool an oversaturated solar industry that is already supplying more than the demand—revealing just how much Chinese solar companies depend on state financial support.

A joint announcement issued by China’s National Development and Reform Commission (NDRC), Ministry of Finance, and the National Energy Administration stated that the central authorities would cut national feed-in tariffs (TiF) for solar-generated energy by 0.05 yuan (about $0.007) per kilowatt-hour, according to a June 4 report by state-run newspaper People’s Daily. Those are payments made to households and businesses for using electricity generated from renewable sources. Solar energy companies also receive subsidies for producing the energy.

Meanwhile, China’s state funds for subsidizing renewable energy companies are running low. According to a July 5 report by Chinese technology news website OFweek, the state fund had a deficit of 112.7 billion yuan (about $16.6 billion) as of the end of 2017, of which 45.5 billion yuan (about $6.7 billion) was spent on solar subsidies alone, citing data from the National Energy Administration.

But solar equipment manufacturers around the world would still be at a disadvantage in competing against their Chinese counterparts. Many Chinese provincial and municipal authorities have continued to provide their own regional financial packages to the domestic solar sector.

In Shenzhen, a city in southern China bordering Hong Kong, the local government announced on June 12 that it would subsidize any photovoltaic (PV) project with 0.4 yuan ($0.06) per kilowatt-hour, with maximum annual subsidies capped at 500,000 yuan ($73,850). Additionally, every square meter of solar panel installed would be subsidized with 390 yuan ($57.60).

China’s solar sector has grown exponentially, due in part to state-sponsored recruitment programs that lure PV talents from other countries to work in China, with promises of lucrative employment packages.

For example, Zhu Xin earned a doctorate in electrical engineering from the University of Michigan and was a senior engineer with the San Jose-based PDF Solutions, which develops process-design integration technologies for integrated circuits (ICs). He returned to China under the government recruitment program, the Thousand Talents Plan, in 2012. Currently, Zhu is the founder and president of Suzhou Juzhen Photoelectric in Zhangjiagang City, Jiangsu Province.

The Thousand Talents Plan was launched in 2008 to attract workers in the science and tech fields from around the world to take up work in China. The program’s purpose is to push forward China’s technological advancement, eventually turning the country into a high-tech powerhouse.

More than 7,000 top-level Chinese and foreign professionals have been recruited under the plan. Chinese nationals who return to China after working or studying abroad are offered a one-time package of 1 million yuan ($151,140).

Local governments in China have similar recruitment programs with their own unique incentive packages to attract overseas talents.

Yang Liyou, general manager of Jinergy, a PV company based in Jinzhong City, Shanxi Province, returned to China under the Thousand Talents Plan in 2013.

Yang had an extensive career in the U.S. renewable energy and tech sectors: He was in charge of the research and development department for the Spanish PV company BP Solar. He was also head of new materials research department at Sarnoff, a New Jersey-based semiconductor technology company.