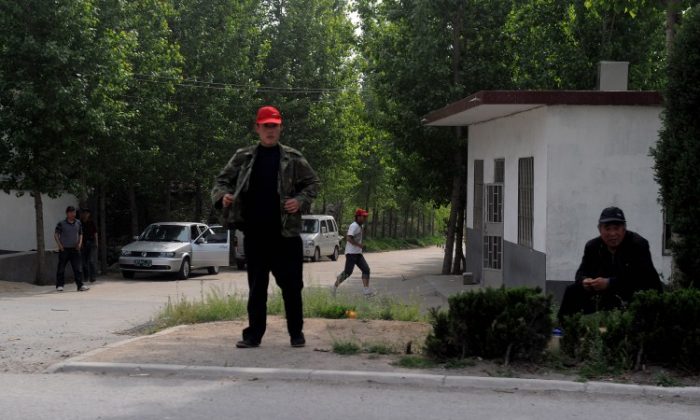 Plainclothes security monitor the entrance to Dongshigu Village, in Shandong Province on April 28, where blind activist Chen Guangcheng lives. More than US$31.6 million has been spent since 2008 to monitor Chen and his family. (Mark Ralston/AFP/GettyImages)
China

During a gathering with friends, a party official from Linyi City was questioned by his friends about the persecution of Chen, according to a Canyu.org report on May 16.

Chen came to international renown in 2005 for leading a class-action lawsuit against Linyi city for the excessive enforcement of the Chinese regime’s one-child policy, which included atrocities such as forced late-term abortions and involuntary sterilizations.

The official, whose name was withheld, told his friends that the tone to handle Chen’s case was set at the highest level of government. The powerful and infamous Political and Legislative Affairs Committee (PLAC), headed by Zhou at the time, was directly enforcing the persecution of Chen.

Chen made international headlines on April 22, when he escaped house arrest and fled to the U.S. Embassy in Beijing to seek asylum. Chen only left the Embassy after Chinese authorities gave U.S. officials assurance that he would not be harmed, even though they were simultaneously threatening his family.

Before his daring escape to the U. S. Embassy, Chen had been detained under house arrest since his release from prison in 2010 for filing the class-action lawsuit.

On Sept. 4 last year, Liu Shasha and a few other rights activists started to visit Chen, and by the end of November more activists had joined in the effort. The local Linyi government reported the visits up to the PLAC, awaiting instructions on how to handle the situation.

At the end of November, Zhou Yongkang personally went to Linyi and called for a meeting with local officials and those from the public security bureau, according to the official quoted in the Canyu.org report.

Zhou arranged monitoring and cracking down on anyone who visited Chen, assigning the numerical reference “905” to the case, indicating that handling Chen had reached a higher level of significance and would receive special attention, according to the official.

Zhou ordered officials to handle the activist’s visitors with harassment, violence, and intimidation. Zhou instructed that the local government would shoulder the pressure of carrying out the intimidation, and that the PLAC would back them up, the official indicated.

Chen’s visitors had already been warned of detention if they visited Chen.

On Dec. 5, 2011, Linyi police detained Chen’s visitors, including Lu Haitao, a writer from Beijing; Shang Xueshan, a rights activist from northeastern China; and two others for ten days. Authorities warned that anyone who dared to visit Chen would also be detained. (When Hollywood actor Christian Bale, known for playing Batman, tried to visit Chen in December last year, he was pelted with rocks.)

After Chen successfully fled to the U.S. Embassy, Linyi police department staff were asked to strengthen the monitoring and intimidation of those who had contact with Chen, with an aim to prevent Chen from passing any information to the United States, the official quoted by Canyu.org indicated.

Detaining Chen in his home and monitoring him night and day has not been cheap. The cost of “stability” for not sending Chen to a regular jail while simultaneously imprisoning and monitoring him and his family cost more than 30 million Yuan (US$4.7 million; according to the BBC, the average rural income in China in 2008 was US$690) in 2008, according to Chen, and grew to over 60 million Yuan in 2011.

Based on these numbers, the authorities have spent over 200 million yuan (US$31.6 million) since 2008 on Chen’s family.