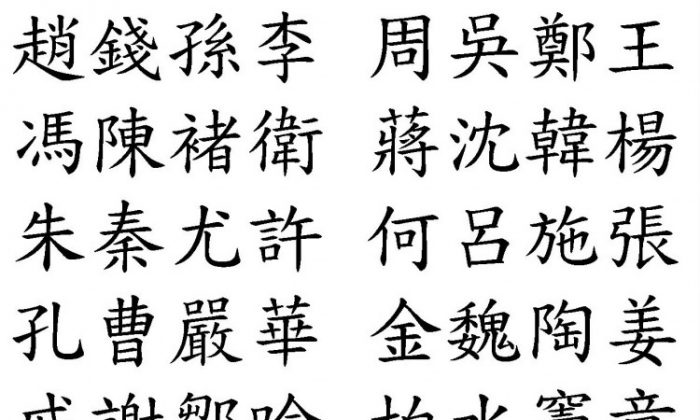 The first 40 surnames in “Hundred Family Surnames,” a text that records common surnames in ancient China. (The Epoch Times)
Science

New research into Chinese surnames has revealed the impacts of historical migrations on the current population structure in China.

Researchers Jaiwei Chen of Beijing Normal University and Yida Yuan of the Chinese Academy of Sciences led the research team and analyzed data from China’s National Citizen Identity Information System using the isonymy method—which looks at the distribution of same or similar names—to predict how closely related the regional populations in China are.

“Surnames are inherited through the male line, which means they can be considered markers for the Y chromosome genes,” explained Chen in a media release.

“This means a study of surname distribution can help us understand genetic structures and historical social behavior, such as the role of migrations.”

The results suggest that the least related populations reside in the middle and lower regions of the Yangtze River. The researchers attribute this finding to multiple large migrations in Chinese history.

In contrast, the vast area covered by the eastern province of Shandong and the three northwestern provinces has a very small genetic distance due to a migration called “braving the journey to northeast China,” when 20 million Chinese migrated to the region to prevent occupation by the Japanese from the mid-17th century to the 1940s.

The study also revealed that regions with higher proportions of minorities contain more similar surnames, which implies that people who live in those regions tend to be genetically more closely related than in other areas.

Chinese surnames have a 4,000-year-old recorded history, and surname distributions have stayed consistent for the past 900 years. Even though China has a population of 1.28 billion, the Chinese people share only 7,327 surnames. The most common 100 surnames account for 85 percent of the population.

“The most noticeable trends are the low number of surnames and their isolation by distance, both of which demonstrate the historic stability of Chinese surnames,” Chen concluded.

“The historical inheritance of Chinese surnames has been continuous, with a unique balance between drift and migration after thousands of years of surname evolution.”

The study was published online in the American Journal of Physical Anthropology on March 28.