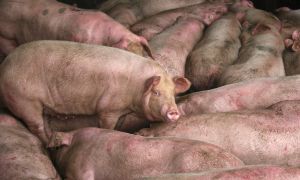 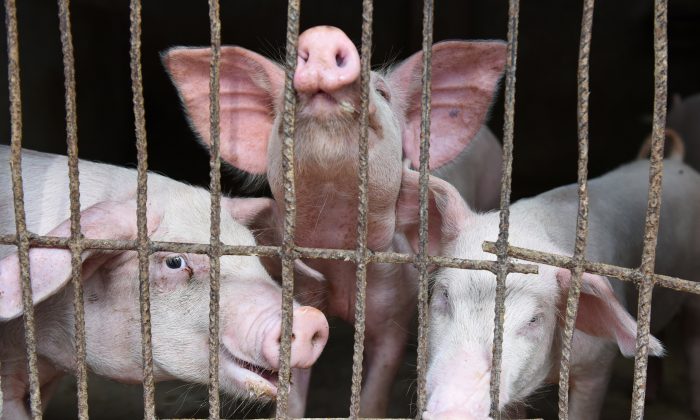 Pigs are seen at a family farm in Fuyang, Anhui Province, China, on July 5, 2019. (China Out via Reuters)
China Business & Economy

BEIJING—China’s pig herd could halve by the end of 2019 from a year earlier as an epidemic of African swine fever (ASF) sweeps through the world’s top pork producer, analysts at Dutch bank Rabobank forecast on July 30.

The bank stated that China’s herd, by far the world’s biggest, was already estimated to have shrunk by 40 percent from a year ago, well above official estimates that have ranged from 15 percent to 26 percent.

The forecast comes amid industry speculation that the decline has been much worse than confirmed by agriculture officials, who in July launched an investigation of local authorities’ efforts to contain the disease.

Rabobank said China’s pork production in 2019 was expected to fall by 25 percent from the previous year, a smaller drop than pig herd loss due to the large number of animals slaughtered in first half of 2019.

Output of pork, China’s favorite meat, will likely drop by a further 10 percent to 15 percent in 2020, it said in a report.

Production may take more than five years to recover to levels prior to the deadly outbreaks as challenges, including a lack of solutions to prevent the disease and a lack of capital, will restrict restocking, it added.

Reuters reported earlier in July that as many as half of China’s breeding pigs have either died from African swine fever or been slaughtered because of the spreading disease.

Rabobank, which in late 2018 estimated China’s pig herd at 360 million animals, said in April that up to 200 million pigs could be culled or die due to the disease, while pork output could fall by 30 percent.

African swine fever is harmless to humans but fatal and highly contagious to pigs. The first ASF case in China was detected in Liaoning Province on Aug. 3, 2018. By April 19, just eight months later, it had spread to all 31 provinces, regions, and municipalities.

Pork prices began rising substantially in July, and China’s agricultural ministry has said they could surge by 70 percent in coming months as a result of the outbreak.

The Chinese regime has reported 137 outbreaks so far, but many more are going unreported, most recently in southern provinces such as Guangdong, Guangxi, and Hunan, according to four farmers and an official recently interviewed by Reuters.

By Hallie Gu and Shivani Singh. The Epoch Times contributed to this report.