China’s ‘One Belt, One Road’ is Perfect Pandemic Freeway for Coronavirus 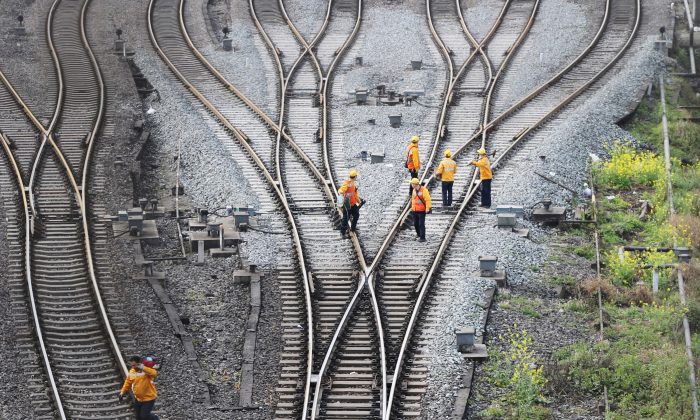 Workers inspect railway tracks, which serve as a part of the "One Belt, One Road" freight rail route linking Chongqing to Duisburg, at the Dazhou railway station in Sichuan Province, China on March 14, 2019. (Reuters)
By Chriss Street

China’s “One Belt, One Road” initiative, which aims to intertwine 152 nations, will allow the coronavirus to spread around the world, making it impossible to quarantine, Foreign Policy warns.

Experts identified the mystery virus as ‘2019-nCoV’ or “Wuhan pneumonia,” which has infected thousands in China. However, analysts say the true number of infections is likely much higher than China is reporting. Hospitals that have run out of coronavirus testing kits are labeling new “deaths as pneumonia or other sicknesses,” China Law Blog reported.

The “One Belt, One Road” (OBOR, also known as Belt and Road) initiative is part of a multi-trillion economic and political agenda to expand Chinese trade and infrastructure around the world. China is the world’s largest lender for land and maritime infrastructure across 70 core countries, accounting for two-thirds of the world population. At this rate, Foreign Policy said the disease will balloon into a “global menace.”

China is using the same playbook of quarantining geographic areas that was successfully used between November 2002 to May 2004 to stop the spread of SARS epidemic. But despite quarantining 46 million residents in 16 cities, the number of deaths and those infected by Wuhan pneumonia continues to climb.

The reproductive rate (RO) for coronavirus “2019-nCoV” infection is estimated by the World Health Organization at up to 2.5, which means an infected person can infect up to 2.5 other individuals. That RO rate is below the 2003 SARS rate of 2-5 that led to 8,098 infected and 774 deaths. But the RO is higher than the 1919 H1N1 flu pandemic that infected 500 million individuals and killed 50 million, including 675,000 Americans.

The big differences from the SARS outbreak 17 years ago is that China’s gross domestic product (GDP) is about 8.4 times larger and its exports are about 3 times larger. China’s distribution map for the first months of the 2003 SARS outbreak showed the concentration of cases restricted to Guangdong and Shanxi provinces. But the current coronavirus outbreak has already been confirmed in 29 of China’s 31 provinces.

Despite 35 million Chinese being quarantined, the outbreak is spreading exponentially across China and has proliferated to about a dozen other nations in just three weeks.

World Health Organization (WHO) Director-General Tedros Adhanom Ghebreyesus told a press conference on Jan. 23 that after two days of debate with global experts about coronavirus: “I am not declaring a PHEIC (public health emergencies of international concern) today.” But he quickly added: “Make no mistake. This is an emergency in China, but it has not yet become a global health emergency. WHO’s risk assessment is that the outbreak is a very high risk in China, and a high risk regionally and globally.”

The social and economic effects of a pandemic were discussed at Event 201, hosted by Johns Hopkins University’s Center for Health Security in New York City on Oct. 18. A simulation test of a global pandemic showed that a highly contagious disease can spread around the world in six months and kill 65 million people in eighteen months.

A preliminary research paper by Lancaster University epidemiologist Jonathan Read estimates that the current coronavirus has a much higher RO rate at 3.8. He expects 250,000 coronavirus cases in Wuhan by Feb. 4.

Nicholas Pardini of Davos Advisory worries there is a great risk of “hidden contagion” in global supply chains. He emphasizes: “coronavirus is communicable not just by human-to-human interaction, but also be transmitted by contact of an inanimate object handled by a diseased person, such as a factory worker.”