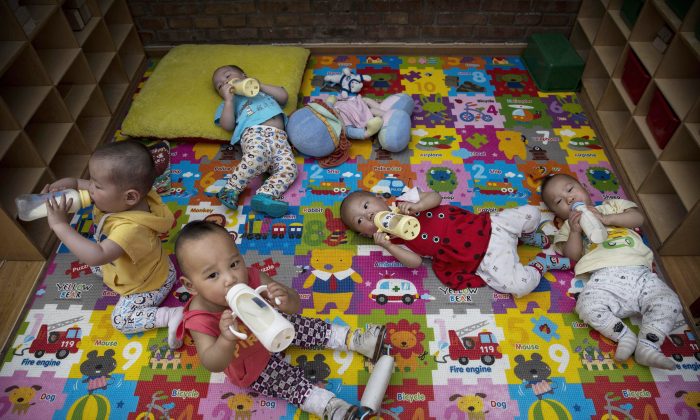 On Oct. 29, the Chinese Communist Party’s (CCP) Fifth Plenary Session of the 18th Central Committee published its bulletin of seven key points. The first point on the list is allowing all families two children. This was to appease the public. It has little to do with supporting aging populations or labor supply. With economic downturn being unstoppable, they have thrown people a bone to maintain social harmony.

Will the new policy help maintain social harmony? I would say yes, but only to a limited extent. The reason is, only medium- and low-level employees in government or Party institutions and white-collar workers who live in urban areas can actually benefit from this policy. These are the people who could not afford the enormous fines for having a second child. They also worried that they would lose their jobs if they violated the one-child policy. Therefore they had to restrict themselves to only one child.

Who Will Have More Babies?

Among mid- and senior-level officials, many have more than one child with their lovers. Most famous is the case of Ling Jihua, former director of the CCP Central Office, who has seven mistresses and five illegitimate children.

Wealthy people are not subject to scrutiny for promotion at work, and they have more freedom in general. They are able to pay to have more children, such as movie director Zhang Yimou who paid a fine of nearly 7.5 million yuan ($1.2 million) for his three children born out of the plan. They may also send their wives or mistresses to give birth in the United States or Canada. These children then have foreign citizenship and do not need Chinese citizenship.

On the other hand, people working at government agencies and educational institutions did not dare have more children. Yang Zhizhu from China Youth University of Political Studies was punished for having a second child. He became a famous petitioner for the unplanned child, and his life has been severely affected.

Thus, allowing all families to have two children can only be regarded as overdue fairness.

Not a Fix for Aging Population Crisis

One of the main stated reasons for allowing Chinese couples to have a second child is the imminent aging population crisis. The solution, according to statements made by the government and many scholars is a greater supply of labor.

This statement is wrong for two reasons. First, even if young Chinese couples “work hard” at having more babies from here on out, new labor supplies will not emerge for another 20 years.

Second, if the aging crisis were really due to a labor shortage, then China should not have such a serious unemployment problem right now. However, the tragic fact is that China is experiencing an excess labor force in all fields. Workers with low-level education as well as college graduates, including those with master’s or higher degrees, have difficulties finding jobs. Many white-collar workers employed by foreign enterprises also lost their jobs.

The Chinese people should demand that their government return to them the right to decide how many children they want. There is no need for the government to talk about the “demographic dividend” disappearing when the current unemployment crisis cannot even be resolved. It is ludicrous to expect that labor, 20 years from now, will ease the pension crisis.

Social conditions are ripe to abandon state-enforced family planning. The Chinese government should shift from family planning to people’s own, voluntary birth control. In other words, give the right to control family size back to the people, instead of having the government control it.

In the course of implementing family planning policies, China’s family planning organizations have become an interest group relying on income from fines. Couples have suffered all kinds of inhumane treatment, leading to resentment from society on the whole and criticism from the international community.

Despite the policy being retracted, it’s unclear what impact it will have. In cities and relatively developed rural areas, Chinese know that the future of children is associated with the costs to raise them. According to a March 19, 2015, report by Shanghai Women’s Federation, only 15.1 percent of women surveyed said they intend to have a second child. More than half clearly indicated, “One is enough.” The economic cost of raising children was the top reason for women not wanting more.

The survey is an indication that there will not be a baby boom in Chinese cities or developed rural areas after the implementation of the two-child policy, because people worry about the cost of raising children and their quality of life. As for poverty-stricken areas, we can only trust in people’s ability to adapt.

This is an abridged translation of He Qinglian’s article posted on Voice of America Chinese on Oct. 30, 2015. He Qinglian is a prominent Chinese author and economist. Currently based in the United States, she authored “China’s Pitfalls,” which concerns corruption in China’s economic reform of the 1990s, and “The Fog of Censorship: Media Control in China,” which addresses the manipulation and restriction of the press. She regularly writes on contemporary Chinese social and economic issues.