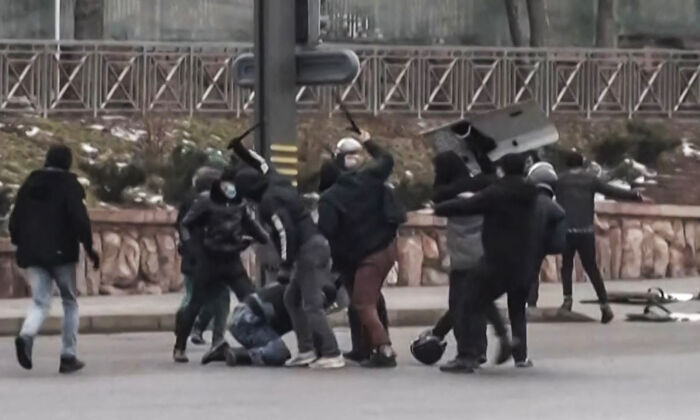 A frame grab taken on Jan. 6, 2022 from an AFPTV video made on Jan. 5, 2022, shows protesters clashing with Kazakhstan's security forces during a demonstration in the country's largest city Almaty as unprecedented unrest in the Central Asian nation spins out of control due to a hike in energy prices. (ALEXANDER PLATONOV/AFPTV/AFP via Getty Images)
Chinese Regime

China’s largest media, the state-operated Reference News, has repeated allegations from Russian media sources on Jan. 6, that the United States was the force behind the unrest in Kazakhstan, which has killed dozens of protesters and at least 18 law enforcement officials.

Reference News did not provide any evidence to support the claims by Russian media. Washington has also denied the allegations.

“We’re monitoring reports of protests in Kazakhstan. We support calls for calm, for protesters to express themselves peacefully, and for authorities to exercise restraint,” White House press secretary Jen Psaki told reporters at a Jan. 5 briefing. “There are some crazy Russian claims about the U.S. being behind this. Let me just use this opportunity to convey that as absolutely false and clearly a part of the standard Russian disinformation playbook.”

The Kazakh protests were triggered after sudden and steep hikes in gas prices in the Mangistau region. However, the demonstrations escalated on Jan. 4 when demonstrators started calling for the former president, Nursultan Nazarbayev, who left office in 2019 after 30 years in power, to leave.  Nazarbayev and his patronage networks are still seen as controlling much of the country, with many members of his family still in high-level positions around the state.

Protesters around the country have confronted Kazakh riot police and the National Guard forces with the most prominent clashes known at present occurring ion the streets of Almaty, the country’s largest city and former capital, where the presidential palace and governor’s office were set on fire.

Tokayev has also put Kazakhstan on a high terrorist alert, implemented curfews, cut off communications around the country describing what was occurring in the country as the work of foreign and domestic  “terrorist organizations” in a televised speech on Jan. 7.

Both Chinese state-run media outlets, Reference News and Global Times published articles on Jan. 6 claiming that the United States was behind the Kazakh “riots.” Meanwhile, China’s foreign ministry claimed that the unrest was Kazakhstan’s internal affair and that China wouldn’t get involved.

“It’s easy to see the geopolitical ambitions of the United States and the West from this riot [in Kazakhstan],” Reference News published on Jan. 6. “In recent years, the United States has continuously strengthened its containment of Russia and China.”

The Reference News article also claimed that all anti-government protests in post-Soviet states were planned by the United States and other countries in the West. It argued that because Kazakhstan, the world’s ninth-largest nation by landmass, has close relations with Russia and China it is a key target for destabilisation from the West.

Meanwhile, state-run tabloid Global Times claimed in its Jan. 6 report that the U.S. government was the force behind the Kazakh protests just because the U.S. embassy in Kazakhstan had warned its citizens of a possible protest on Dec. 15, 2021.

However, the embassy’s notice simply warned Americans that the Kazakh opposition party, Democratic Choice of Kazakhstan (DVK or DCK), had called for demonstrations on Dec. 16, which was publicly available information.

Wang Wenbin, the spokesperson for China’s foreign ministry, also commented on the Kazakh unrest on Jan. 6 in media briefings saying that what was happening was part of Kazakhstan internal affairs and the the CCP believes that the Kazakh government had the capacity to solve the problem.

Wang declined to answer questions from reporters on whether Beijing would consider sending troops to its western neighbour, and ignored questions about the Kazakh regime asking the CSTO for help.

Over the past decades the United States has expressed its support for a peaceful Kazakhstan and increased financial investments in the country.

During a virtual business forum in June 2021, Meirzhan Yusupov, chair of state-owned company Kazakh Invest, which promotes foreign investment in Kazakhstan, expressed his appreciation to the United States for its investments in the Central Asian country.

“In 2019, the volume of direct investment from the United States reached a record level of $5.5 billion, which is a quarter of the total investment inflow to the country,” Yusupov said.

In 2019, China invested $27.6 billion in Kazakhstan, according to chinadialogue.net, mostly in oil and gas.

The protests, which started on Jan. 2 in the west of the country in the city of Zhanaozen and the Mangistau region, began in response to an increase in the price of fuel to 120 tenge (27 cents), from last year’s 60 tenge (14 cents).

Kazakh petroleum prices had previously been regulated and subsidized in the country. However, in 2019, the government decided to institute a move to an electronic pricing system to end subsidies for domestic liquefied petroleum gas (LPG) customers and allow the market to dictate prices instead.

This means that the domestic trade in LPG now happens over online trading platforms, and in areas where LPG fuel is in high demand—such as the Mangistau region, where the government estimated that at least 70 percent of cars run on the fuel—there have been steep jumps in prices.

However, the Kazakh government denies that the new pricing system is to blame for fuel prices and has pointed to retailers as the source of the steep price rise.

Energy Minister Magzum Mirzagaliyev said in a statement on Jan. 2 that there’s nothing wrong with the new system and that it’s the fault of gas stations, which he said had purchased LPG fuel for 78 tenge (18 cents) per liter but were setting the retail price between 100 to 120 tenge, at a 25 to 50 percent markup.

Mirzagaliyev said this was “higher than expected” and “gives us grounds to suspect possible price speculation among filling stations,” Eurasianet reported. He also said the price increases were due to increased demand for LPG, despite a stagnant output from the region’s gas company, while noting that the national anti-monopoly agency is investigating.