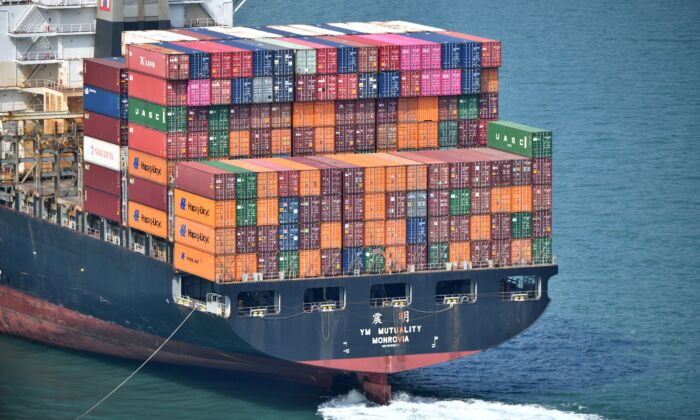 A cargo ship loaded with containers is pictured near the port in Hong Kong on October 5, 2019. (ANTHONY WALLACE/AFP via Getty Images)
US-China Relations

The Chinese regime released its latest trade data on Oct. 14, showing that imports and exports both fell in September, amid indications that China’s economy is facing weak domestic demand and a tough export environment, economists say.

On the same day, government officials refused to talk about a “phase one” U.S.–China trade deal announced at the White House on Oct. 11, in which U.S. President Donald Trump said China had agreed to import more American agricultural products.

China’s General Administration of Customs held a press conference at the Cabinet-like State Council on Oct. 14. Li Kuiwen, spokesperson for the customs agency, shared China’s trade data in September as well as U.S.–China trade data in the first three quarters of 2019.

The U.S.-China trade dispute was set off in March 2018 after the United States imposed punitive tariffs on Chinese imports, to which the Chinese regime responded with retaliatory duties.

Li said that the Chinese regime tried to promote trade by twice increasing the tax refund rate for Chinese businesses to export products overseas, and twice decreasing value-added tax rates on imported products. But he didn’t elaborate about the tax policies.

Zhang Yi, chief economist at Beijing Zhonghai Shengrong Capital Management, said in September, “Exports are still weak even in the face of substantial yuan currency depreciation, indicating that sluggish external demand is the most important factor affecting exports this year.”

He had told Reuters in July, “Overall, imports and exports are declining quarter by quarter, and weak foreign demand will be the biggest challenge in the second half of this year.”

Hu Xiaoyue, principal macroeconomic analyst at Shanghai Securities, told Reuters on Oct. 14 that China’s economy also relies heavily on exports, especially as one of the world’s key manufacturing hubs. As exports have continued to fall, that doesn’t bode well for the economy.

This takes into account that export figures for the coming months may be higher because Chinese firms are seeking to export more before the United States implements further tariff boosts, said Liu Yaxin, macroeconomic analyst at China Merchants Securities.

Trump announced on Oct. 11 that as part of a “phase one” trade deal, the United States has agreed to postpone the planned Oct. 15 tariff increase. In exchange, China would import $40 billion to $50 billion worth of U.S. agricultural products. The deal also covered currency, financial services, and some aspects of intellectual property protections.

However, when reporters asked Li about the Chinese commitment, Li evaded answering and said, “For specific information, please ask the relevant government departments.”

Geng Shuang, spokesman for China’s foreign ministry, also declined to answer during an Oct. 14 daily press briefing. Reporters asked him to confirm that China would buy $50 billion worth of U.S. agricultural products annually and whether China believes this deal would be sealed, given that negotiations have broken down before.

Geng responded by repeating the words from a brief news report by Chinese state-run media Xinhua, then said, “We hope the U.S. side can walk together with the Chinese side to approach each other … and promote the healthy and stable development of bilateral economic and trade relations.”

Meanwhile, Bloomberg, citing two anonymous insiders, reported on Oct. 14 that Beijing “wants to hold more talks” to hammer out the details of the “phase one” trade deal. In addition, China wants Trump to also scrap the scheduled tariff increase in December.

U.S. Treasury Secretary Steven Mnuchin told media on Oct. 14 that the U.S. administration could proceed with the December tariffs if the “phase one” deal isn’t finalized by then.

Mnuchin also said more trade negotiations at various levels would take place over the coming weeks, including a phone call between himself, U.S. Trade Representative Robert Lighthizer, and Chinese Vice Premier Liu He, and talks between Trump and Chinese leader Xi Jinping.