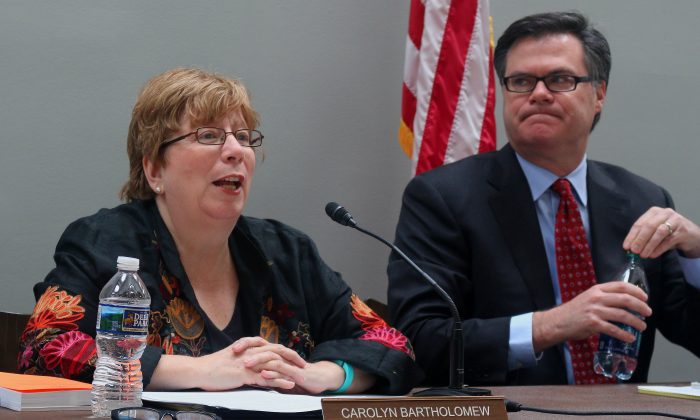 Carolyn Bartholomew, Vice Chairman of the U.S.-China Economic and Security Review Commission, introduces the Commission's 2016 Annual Report to the Congress, on November 16 on Capitol Hill. To her left is Chairman Dennis C. Shea who spoke before her. The bipartisan commission reports to Congress on national security implications and the economic relationship between the U.S. and People's Republic of China. (Gary Feuerberg/ Epoch Times)
China

WASHINGTON—Members of the U.S.-China Economic and Security Commission, an advisory group to Congress on China, are calling for a reconsideration of the United States’ long-held China policies, citing widespread disappointment over China not moving toward becoming a free market economy.

On Nov. 16, the Commission’s annual report—a 550 page book—was released, and several commissioners discussed their key findings and recommendations and answered questions from the public.

“The Commission believes it’s time to reconsider U.S. policy towards China guided by its kind of actions, not by its words,” Vice Chairman Carolyn Bartholomew said.

At the public release of the report, two topics dominated the Commissioners’ concerns and questions asked by the press and interested China watchers: trade imbalance and state-owned enterprises (SOEs).

The U.S. goods trade deficit with China in 2015 reached $365.7 billion, an increase of 6.5 percent from the previous year and the highest on record. The cumulative trade deficit with the U.S. since China’s accession to the World Trade Organization (WTO) fifteen years ago is “a staggering $3.5 trillion,” states the report.

It has become all too apparent that the CCP [Chinese Communist Party] has no intention of opening up what it considers key sectors of its economy to significant U.S. or foreign competition and control.
— 2016 Report to Congress, U.S. China Economic and Security Review Commission

Chinese officials repeatedly made promises to cut back production in steel, aluminum, and coal, but progress has been “extremely slow” or nonexistent. Maintaining employment and economic growth is a higher priority. Beijing exports its surplus production to the U.S. and other foreign competitors, which affects employment and capital expenditures, especially steel and aluminum producers here. Beijing does not want to shut down industrial production and lay off workers.

The Commission laments the unfair barriers that the regime imposes on foreign firms, including forced technology transfers, and the theft of intellectual property.

“It has become all too apparent that the CCP [Chinese Communist Party] has no intention of opening up what it considers key sectors of its economy to significant U.S. or foreign competition and control,” states the report.

In deed and word, China has shown to be a country that does not embrace free market principles.
— Vice Chairman Carolyn Bartholomew, U.S. China Economic and Security Review Commission

Differences with the U.S. are shaping up over whether China will be granted market economy status.

The WTO accession protocol has meant that the trade partners are authorized to treat China as a nonmarket economy for purposes of applying antidumping and countervailing duty enforcement. If China is regarded as a market economy, it would result in a significant reduction in antidumping duties, or, in other words, anticompetitive advantages for Beijing.

“Countries rely on antidumping and countervailng duty enforcement cases against China to protect themselves from the influx of government subsidized goods imported below market value,” states the report.

The U.S. argues that expiration of the agreement does not automatically grant China market economy status. “We will make that judgment under our own laws,” Chairman Shea said.

U.S. law has strict criteria for determining whether an economy is a market economy. Some of these include the extent to which foreign investment is permitted, the extent of government ownership of industry, and control over the allocation of resources. China gets a failing grade on all these and so it is unlikely that the Commerce Department, which makes the determination, will classify China as a market economy. It is not on the path to becoming one either, according to the report.

Vice Chair Bartholomew said, “In deed and word, China has shown to be a country that does not embrace free market principles.”

Beijing has failed to make needed reforms to enable a more market-led economy by reigning in the size and influence of its SOEs. There are several reasons why the CCP is not enthusiastic about reform that would require some deregulation and privatization of the SOEs.

First, the SOEs in strategic sectors are the primary entities through which the CCP achieves strategic ends and so it would be resistant to giving up control.

Second, reducing the size of the state sector would produce job losses and slower growth. Finally, entrenched interests that rely on perpetuating the SOEs as they are make it politically difficult to reform the sector.

China’s state sector continues to be heavily subsidized, despite warnings from the International Monetary Fund that many large SOE defaults could impact the global economy. It has pumped stimulus money into the economy to boost economic performance. China’s state-controlled banks released a record $701 billion (RMB 4.7 trillion) of credit during the first quarter of 2016, which even exceeded the amount used in the first quarter of 2009 during the global financial crisis.

China’s repeated reliance on borrowing from its state-controlled banks to bolster growth is alarming, says the Commission report. “China’s stimulus policies are delivering rapidly diminishing returns,” the report states. Using analysis from Morgan Stanley, the report states that today it takes nearly six RMB of additional credit to generate one RMB of GDP growth. During 2003-2008, it took just one RMB of extra credit for one RMB of growth.

As a result of inefficiencies, “Chinese SOEs face growing corporate debt, sluggish demand, weak pricing, and high leverage. SOE profits have been steadily declining in recent years. … To remain viable, many SOEs remain reliant on loans from state banks, leading to the proliferation of ‘zombie’ companies that require constant bailouts to operate,” states the report.

To remain viable, many SOEs remain reliant on loans from state banks, leading to the proliferation of ‘zombie’ companies that require constant bailouts to operate.
— 2016 Report to Congress, U.S. China Economic and Security Review Commission

Dr. David Lipton, first deputy managing director of the IMF, is cited that the growth of corporate debt must be addressed immediately by making serious reforms. The SOEs are “essentially on life support” and if not dealt with, could lead to a larger crisis.

However, despite the rising debt levels, Chinese companies are increasingly acquiring foreign companies in strategic sectors. The Commissioners at the release of the report expressed wariness about this development, with several commissioners referring to Chinese SOEs as “arms of the state.”