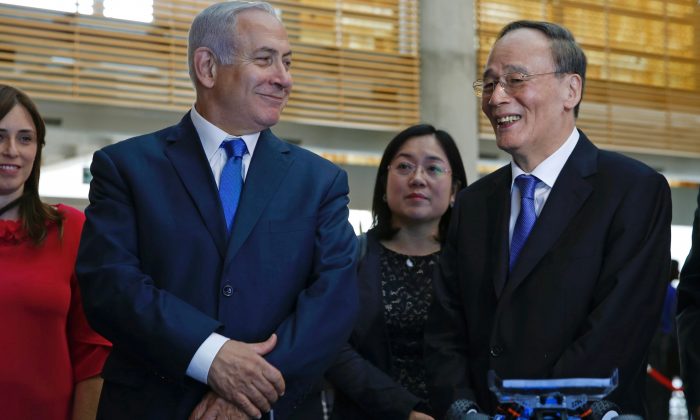 Chinese Vice Chairman Wang Qishan recently concluded a four-day visit to Israel with the signing of several major cooperation agreements with the Jewish state as part of a plan to ramp up their relationship.

The two countries signed eight joint agreements in the fields of life sciences, innovation, digital health, and agriculture, according to an Oct. 24 announcement by Israeli Ministry of Foreign Affairs. The agreements are effective to 2021.

But China has ulterior motives for investing in the Middle Eastern country, especially in the science and technology field.

During the four-day visit, Wang and Israeli Prime Minister Benjamin Netanyahu also took part in the fourth session of the Israel-China Joint Committee on Innovation Cooperation, an intra-government meeting held annually alternately between Jerusalem and Beijing to spur cooperation in science and industry research.

Currently, there are seven Chinese multinational corporations with R&D centers in Israel, including Chinese telecoms giant Huawei, according to the Ministry of Foreign Affairs.

According to Chinese state-run news media The Paper, China invested a total of $16 billion in Israel in 2017, with most of the investment going into the technology sector.

Beijing’s Strategy in the Trade War

China’s business interests in Israel have much to do with the current Sino–U.S. trade war, according to Xia Ming, a political science professor at the City University of New York.

Xia, in a recent interview with Radio Free Asia, said that China sees Israel as a “the path to hope,” because Israel possesses advanced technology, advanced military weapons, and an ability to influence American society—since the United States and Israel are allies, according to Xia. Israel could be an alternate trade partner in the face of the U.S. market closing itself off to Chinese goods.

Meanwhile, Israel is in need of financial support to build up the country’s infrastructure. China has capitalized on this: Chinese companies currently have multiple infrastructure projects underway in Israel, including Tel Aviv’s light-rail transit system, the Tel Aviv–Jerusalem electric railway, and two water desalination sites.

China’s successful bid to operate a port facility at Haifa beginning in 2021, a busy commercial hub that is also home to an Israeli naval base, has raised concerns about national-security risks.

In addition, the U.S. Navy could face the possibility of not being able to regularly call at the naval base, according to maritime magazine Maritime Executive.

Meanwhile, U.S. investments in Israel’s infrastructure are currently negligible, according to an Oct. 26 article by Stratfor, a Texas-based research center, even though U.S. Treasury Secretary Steven Mnuchin expressed U.S. interest in increasing financial support for Israeli infrastructure on Oct. 21, while talking to reporters in Jerusalem amid a tour of the Middle East.

Experts see Beijing’s investments as an attempt to hold greater geopolitical influence and weaken U.S. influence in the Middle East.

The United States and Israel have had a strategic partnership for the past 50 years; much of the Israeli military is equipped with U.S. military hardware, including fighter jets, helicopters, and missiles.

An Israeli fighter construction program in the 1980s, called IAI Lavi, ended up supplying some of the key technologies to China’s fighter jet program J-10—through technology transfer and other means, according to a 2003 report by Frost and Sullivan, a market research company based in Texas. One such technology was the Python 3, an advanced air-to-air missile technology built by Israeli weapons manufacturer Rafael Advanced Defense Systems.

Another Israeli technology that was transferred to China is the EL/M-2035 radar, a system for tracking targets that was built by Elta Systems, a subsidiary of government-owned Israel Aerospace Industries (IAI), according to the report.

Such technology transfer has alarmed U.S. officials. In April 2005, the Inter Press Service news agency reported that after being pressured by the U.S. government, Israel dropped a plan to outfit three Chinese military airlifter II-76s with Phalcon radars. The radars were developed by IAI and Elta, and financed by the U.S. Congress, according to the Frost and Sullivan report.

The Nuclear Threat Initiative, a U.S.-based research organization that analyzes weapons transactions around the world, also tracked down that Israel had supplied China with the U.S. Patriot missile system. Both Israel and China have denied the allegations. China had allegedly used the Patriot technology to improve its surface-to-missile systems.

Israel has also purportedly supplied China with U.S. cruise missile technology, according to Inter Press Service, for China’s development of its own YF-12A, YJ-62, and YJ-92 cruise missiles.

Israeli magazine Israel Defense also reported that China’s ASN-301, a mobile anti-radiation unmanned aerial vehicle (UAV) introduced in early 2017, was a near-copy of the Harpy drone, which was made by IAI and sold to China in the 1990s. The UAV is designed to fly into enemy airspace and detect radars. Upon detection, it will hone in and destroy the system.

The Chinese UAV is similar to Harpy in terms of its pusher propeller, length, and weight.

China has also been known to resort to hacking to obtain Israeli military technology.

Three Israeli military-contractor firms for the Iron Dome missile defense system, designed to intercept and destroy short-range rockets and artillery shells, were hacked by Beijing-linked hackers beginning in 2011 and 2012, according to a July 2014 article by Israeli newspaper The Jerusalem Post. They were Elisra Group, IAI, and Rafael Advanced Defense System.

More than 700 emails, documents, and manuals about the Iron Dome were stolen by the hackers.

Officials are now urging vigilance against such attacks. “Israel is part of this Chinese global effort because of its advanced hi-tech industry and intimate relations with the U.S. and EU,” said Dr. Harel Menashri, head of the cyber department at the Holon Institute of Technology in Israel, and a former official in the Shin Bet (Israel Security Agency), in an April 7 report by The Jerusalem Post.