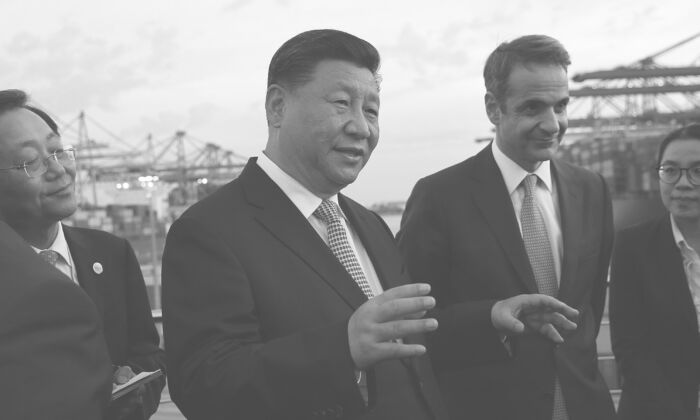 China has invested in, built, or rented ports in over 60 countries over the past decade, some of which are key locations for maritime trade and military presence. These ports are not only in developing countries but also in the developed world.

In June, China’s largest state-owned shipping and logistics services supplier, China Ocean Shipping Company (COSCO), announced that it plans to acquire a stake in the Port of Hamburg. The Hamburg port is the largest seaport in Germany, the third-busiest port in Europe, and the 15th-largest in the world.

Before the Port of Hamburg deal, COSCO already had control in Greece’s Port of Piraeus, Italy’s Port of Trieste, Spain’s Port of Valencia, Belgium’s Port of Antwerp, and many more across Asia, Africa, and South America.

“Today, China owns 96 ports around the world … giving Beijing strategic dominance without having to deploy a single soldier, ship, or weapon,” wrote former British Defence and International Trade Secretary Liam Fox and former U.S. National Security Adviser Robert McFarlane in their opinion piece for The Mail on Sunday on Aug. 7.

“An economic power must be a maritime power and be powerful in shipping,” Chinese state-run Xinhua quoted Xi saying on July 11, 2020. “[Since November 2012], Xi Jinping has arranged the layout of ports in a broader space … He has visited the ports inside and outside of China,” the report added.

The report said that by controlling and operating key ports around the world, China can quickly expand its influence. It added that Xi would keep ordering the regime and its enterprises to construct and operate ports well in both China and overseas.

The Chinese regime continues to expand its control on global ports through its state-run port operators, shipping companies, and investors. COSCO already claims to be the largest port operator in the world.

“China is already a veritable shipping country,” China’s state-run mouthpiece Xinhua reported on July 11, 2020. It said that China produces more vessels than any other country every year, ships 26 percent of global goods which is the most for any country in the world, and operates 15 of the world’s top 20 cargo throughput ports, while seven of the world’s top ten container ports are in China.

“We must have the target and bravery to be the number one of the world,” the report quoted of Xi’s orders given for the regime in Shanghai in November 2018.

As a giant state-run company, COSCO plays one of the most important roles in the Chinese Communist Party’s global port strategy.

According to COSCO’s website, the state-owned company has invested in 58 ports across Southeast Asia, the Middle East, Europe, South America, and the Mediterranean. Of these, 51 ports are for containers and have an annual cargo handling capacity of approximately 129.4 million TEU.

The Port of Piraeus in Greece is a key port that COSCO operates. It is the largest port in Greece and one of the largest in Europe. Located in the Saronic Gulf on the western coasts of the Aegean Sea, it connects the Mediterranean Sea and the Black Sea, and is one of the transfer stops for the Suez Canal.

China Merchants Group, a key China state-run enterprise that is headquartered in Hong Kong, is another key investor allowing the Chinese regime to expand its control of ports around the world.

“China Merchants Group is the world’s leading port investors, developers, and operators. … We successfully deployed the ports in Southeast Asia, Africa, Europe, Middle East, North America, South America, Oceania, and other regions,” the group says of its operations on its website.

In 2017, the group took over the operation of Hambanthota International Port, Sri Lanka’s second largest port located between the Malacca Straits and the Suez Canal, linking Asia and Europe.

In 2018, the group also directed the most tonnage in the container terminal of a main port in South America, Port of Paranaguá, which is the second largest port of Brazil.

The Chinese regime is trying to control more ports, both harbor and dry ports, around the world, and is modernizing and enforcing its navy. This is part of Xi Jinping’s China Dream, reported Chinese state-run CCTV on July 11.