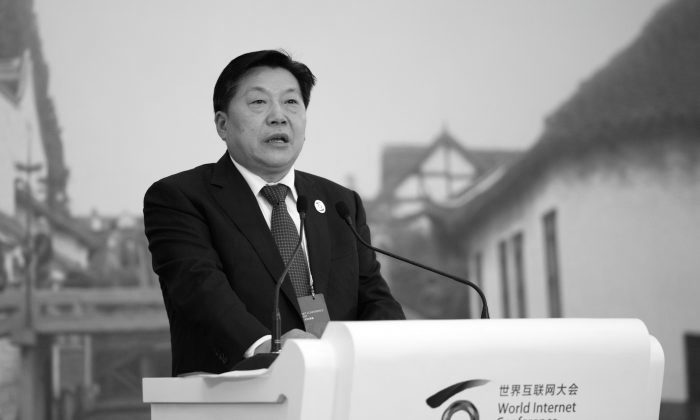 China has announced the first major official to be taken down since leader Xi Jinping further consolidated power within the Chinese Communist Party (CCP) at the 19th National Congress.

Lu Wei, as the former head of the CCP’s Cyberspace Administration, was in charge of the country’s heavy Internet censorship and monitoring.

On Nov. 21, the CCP’s anti-corruption agency, the Central Commission for Discipline Inspection (CCDI), announced that Lu will be under investigation for “seriously violating Party discipline,” an oft-used euphemism for corruption. He has been expelled from his posts.

Lu had spent most of his career working in the CCP’s propaganda agencies under Liu Yunshan, the former propaganda chief known as a key member of the Jiang faction. Lu had served as party secretary of the state-run Xinhua news agency, and Beijing’s propaganda chief, eventually making it up to deputy head of the CCP’s central propaganda department.

But his true power resided in being the Internet czar as head of the Cyberspace Administration, a position he held from 2013 to 2016. When he was stripped of his post last year, it was already a sign that he was in trouble.

Hong Kong media previously reported that Liu Yunshan and Xi Jinping were not on the same page in terms of Party ideology. Thus, Xi had Lu, who was Liu’s trusted aide, punished.

Lu made his name implementing harsh, restrictive policies, such as the “Internet safety law” that required all Internet companies to have their users register under their real name, while ensuring that Facebook, Twitter, and Google remained blocked in the country.

For three consecutive years since 2015, China held the last ranking on the Freedom on the Net index compiled by human rights organization Freedom House.

Internet users were arrested and prosecuted for posting political dissent or any content deemed inappropriate by censors. 47 year-old Huang Qian, for example, was arrested in Feb. 2015 for posting a series onto Weibo, China’s equivalent of Twitter, titled “Gulag Memoir” about the Chinese regime’s persecution of the Falun Dafa spiritual faith. Huang, herself a Falun Dafa adherent from the city of Guangzhou, was sentenced to five years in prison.

His iron-fisted censorship notwithstanding, Lu liked to keep a high profile, as demonstrated in his establishment of the World Internet Conference held annually in Wuzhen, Zhejiang Province. Lu envisioned it as a global summit where China would show off its dominance. At the 2015 conference, a scandal erupted when Lu recruited foreigners who were working or studying in China to pose as world industry leaders. According to a report by Hong Kong newspaper Apple Daily, Xi Jinping was greatly infuriated by this farce.

Lu also drew publicity to himself when visiting the United States in 2014, meeting with Facebook founder Mark Zuckerberg and other internet executives.

During his tenure, Lu Wei worked to undermine his deputy director, Xu Lin. Xu is a former subordinate of Xi Jinping, having served him when Xi was Party boss of Shanghai.

Lu’s behavior while posted at Xinhua is rumored to be less than appropriate. In 2013, a Xinhua reporter revealed in an online post that Lu was once entertained at a lavish banquet held by businessmen in Beijing. There, breast milk was offered as a delicacy.

According to Epoch Times political commentator Zhou Xiaohui, Lu Wei’s fall implies that Xi Jinping has no plans to slow down his anti-corruption campaign, and will soon be going after those working in the CCP’s propaganda agencies.